Michael Krieger of Liberty Blitzkrieg has written this article about the corrupt and predatory state of our financial system and Federal Reserve banking system – Monetary Looting. 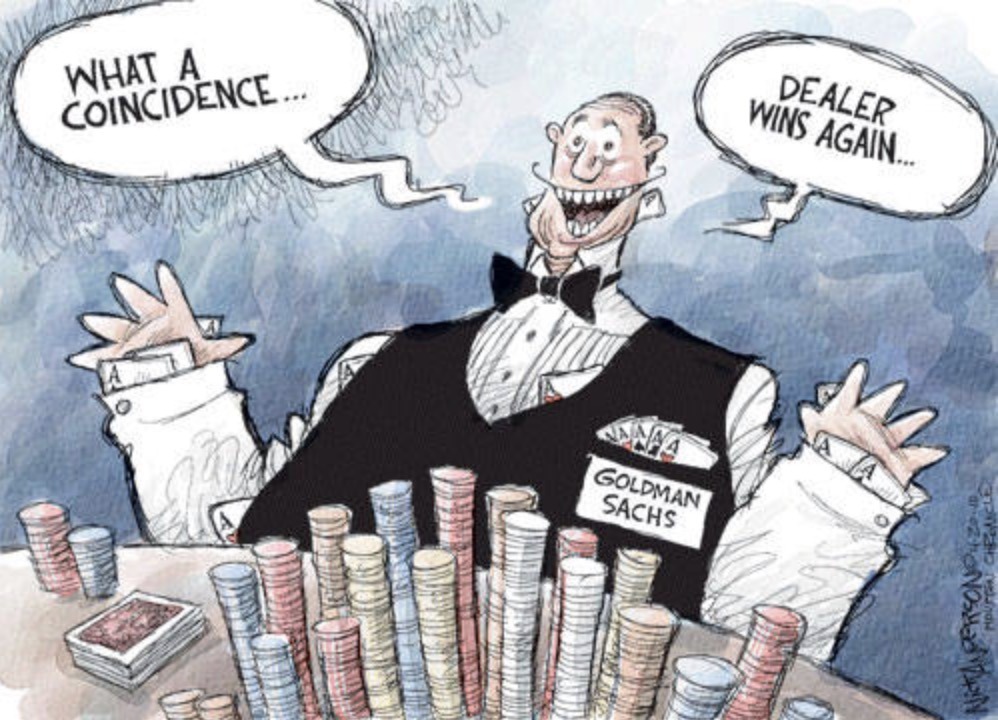 The United States has historically bragged about its free and transparent markets. But what the Fed is doing today is pulling a dark curtain around the financing of this so-called free and transparent market. The public has no idea which Wall Street firms have received this $3 trillion or why they can’t borrow it elsewhere. This kind of obfuscation by the Federal Reserve could actually stimulate distrust in the U.S. banking system. The Fed admitted as much in its most recent Federal Open Market Committee (FOMC) minutes, writing that participation in the Fed’s loan program “could become stigmatized.”

– Wall Street on Parade: Is the Fed’s $3 Trillion in Loans to Trading Houses on Wall Street Legal?

The business model of Wall Street is fraud.
– Bernie Sanders

Financial services as currently structured is the most pernicious, predatory and corrupt industry on earth. Moreover, it’s the deliberately complex and opaque nature of the industry which then limits public debate when some problem arises and governments and central banks are called upon to take emergency measures to “save the system,” which is just a euphemism for enormous sums of corporate welfare being funneled to people and institutions who couldn’t survive otherwise.

It is systemic looting on a massive scale and the primary patrons of this ongoing and seemingly endless scheme are central banks. In the U.S. this means the Federal Reserve, which recently came back into the “market” with enormous new interventions in both the repo market and via renewed balance sheet expansion. I’ve read many of the smart takes on the repo crisis and still don’t feel confident I know precisely what’s going on. This is intentional.

Unelected central bankers throwing around billions upon billions gets almost no scrutiny, while impeachment theater dominates mass media 24/7. Which of these deserves more scrutiny?
This is how the public gets scammed. Look over here, while we loot the system quietly here.

One of the main reasons big finance is able to pull off scam after scam in plain sight relates to the complexity, opacity and esoteric jargon associated with the industry. Repo is a perfect example. The market had a spasm in September and the Fed immediately rushed in with billions to bring the rate down without offering any transparency or a credible explanation of what was going on. Meanwhile, as the crisis continued over subsequent months and the central bank response grew larger and larger, we actually seem to be learning less with each passing day.

Instead of providing the public with the transparency it deserves, Fed officials run around pretending to be financial surgeons called in to perform an unexpected emergency operation on a patient after a freak accident. In reality, central banks are merely pumping billions into an already dead body while enriching connected and powerful individuals and institutions in the process. They know exactly what they’re doing and we need to stop pretending otherwise.

When you hear QE, the only thing that should pop into your mind is upward wealth transfer. In addition to keeping a pernicious system afloat, that’s all it does.

While I’m grateful to those who’ve spent time trying to thoughtfully explain the mechanics of the repo crisis and why it happened, I think that’s a sideshow at this point since nobody who really knows what’s going on is talking. Instead, we should focus on the absurd and unconscionable lack of transparency with regard to Federal Reserve actions. As far as I know, we have no idea which parties are taking up this expanded central bank funding. Think about how criminally insane that is. We have no idea if it’s driven by a troubled institution like Deutsche Bank, hedge funds with over-leveraged trades, treasury issuance, a combination of these factors, or something else.

We don’t know because they don’t want us to know, and they don’t want us to know because they don’t want the public thinking or talking about it. It’s at times like these when the totalitarian nature of central banking comes into crystal clear focus. What we have is government via unelected, unaccountable bankers. It’s the opposite of self-government, and understanding this simple fact blows apart all the myths about our so-called democracy and freedom. Nothing of the sort exists in reality, and when push comes to shove, you’re just a peasant living in an imperial oligarchy…