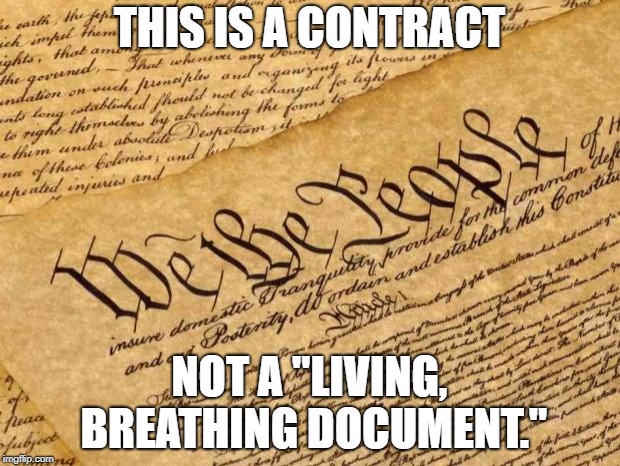 A couple days ago we posted an article that Jacob Hornberger had written for the Future of Freedom Foundation on the First Amendment. In Ignoring the Constitution at the Tenth Amendment Center, he reminds us of other parts of the Constitution that have been eroded and ignored over time. A constitution exists as a conveyance of authority to a government from the people it governs. It strictly limits the powers exercisable by that government. Some people believe that a constitution should be “a living document” in that the words should be re-interpreted over time to mean whatever the rulers think it should mean in the present day. This is the same as having no constitution at all. It means nothing to write things down on paper if it then becomes okay for people to “re-interpret” the text as the opposite of what was written. This is what we have today in the United States. We have a Constitution, but it has been ignored, re-interpreted, and swept under the rug. There are effectively no limits on the power of the US federal government. If you haven’t already noticed this, you haven’t been paying attention.

Constitutional violations have become so commonplace in American life that when they occur, the reaction among many Americans is ho-hum.

There are two classic examples of this phenomenon: the declaration of war requirement and gold and silver as legal tender.

Article 1, Section 8, enumerates the powers of Congress. It states in part: “Congress shall have Power To declare war.”

Article 2, Section 2, enumerates the powers of the president. It states in part: “The President shall be Commander in Chief of the Army and Navy of the United States.”

Yet, we all know that presidents ignore this constitutional restriction with impunity. They exercise both the power to declare war and wage war. There has never been a constitutional amendment authorizing this revolutionary change in our governmental structure.

Moreover, the change has come with the full knowledge and implicit consent of Congress, which has never impeached a president for illegally abrogating Congress’s power to declare war.

Additionally, despite the oath that U.S. military personnel take to support and defend the Constitution, they all blindly obey the president’s order to wage war without the constitutionally required congressional declaration of war.

Article 1, Section 10, states in part: “No state shall make any Thing but gold and silver Coin a Tender in Payment of Debts.

It goes without saying that every state in the Union blithely ignores that constitutional provision. Rather than making gold and silver coin legal tender, they all have made paper Federal Reserve notes, which promise to pay nothing, legal tender.  Many Americans, including state and federal judges, act like that constitutional provision doesn’t exist.

Article 1, Section 8, states in part: “The Congress shall have Power To coin Money, regulate the Value thereof.” There is no power given to Congress to print paper money.

Yet, here we are, living under a monetary system that is based on irredeemable paper notes issued by the federal government. Many Americans, including state and federal judges, act like all this is perfectly normal, as if these restrictions on power within the Constitution don’t matter or don’t really exist.

If public officials are empowered to ignore constitutional provisions whenever they want, then what’s the point of having a Constitution? When the Framers used the Constitution to bring the federal government into existence, their aim was to establish a limited-government republic, ones whose powers were limited to those enumerated in the document. The reason they did that was to ensure that federal officials could not destroy or abridge the freedom of the American people. The Constitution was intended as a higher law that the American people imposed on their government officials. If public officials wanted to change or expand such powers, they would be required to secure an amendment of the Constitution.