NC Scout at the Brushbeater blog has an article up, Developing and Exploiting Open Source Signals Intelligence, in which he discusses the types of information that you should be collecting now for your data books on local communication capabilities as well as foreign.  A third of Americans expect a civil war in the next five years. If a civil war indeed happens, then it’s likely there will be foreign meddling. It’s easier to find out information about capabilities now than during any hostilities. 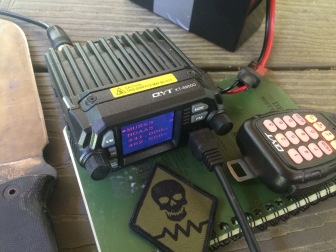 …Back in the early days of this blog I wrote short blurbs about the importance of things called Data Books– which should be nothing new for veterans of more elite units out there and for Long Range Marksmen. But Data Books are not limited to recording Data On Previous Engagements (DOPE) on our weapon systems– it should also serve as a quick reference on a large number of topics for us as we operate in an area. Things that really come in handy, such as:

That last bit is critically important- there’s a reason every Intelligence agency has a technology analysis branch. We have to know what a potential adversary’s capabilities are, beginning with his principle enabler- communications. As I cover in the RTO course, advancements in radio technology being fielded in all areas is changing at a rapid rate. Civilian data in the US is publicly published. Even military data is not terribly hard- the specifics take some digging but glossing over but FCC Frequency Allocations gives a great starting point as to what can be found where. It might be a really good idea, and one I cover in class, to write down all of the license free band frequencies; you know, like the frequencies those MURS, FRS/GMRS, and Marine are actually on? That way if I happen to come across a group talking on 151.82mHz, I know know they’re on MURS 1 and can begin communications mapping of their capabilities.

Wait, what? Communications Mapping is not at all a hard concept- I listen for you, write down where you’re transmitting and a compass bearing (if I can get it) while also writing down any other pertinent information. Things like callsigns, male/female voices, times, languages, accents, emotions, the level of training, and if they’re even hostile from the traffic itself are all items that can tell us the level of organization (or lack thereof) of our adversary. And while it sounds simple, it takes discipline and training to execute correctly and to also remember- you’ll be on the receiving end of this as well…

Brushbeater’s SIGINT for the Small Unit

Selco: Observe and Prepare for the Confusion, Panic, & Mayhem of SHTF

Why such an emphasis on SIGINT, and in particular COMINT?

It is a good solution for two problems everyone needs to solve. The problems being a short and long term way to get useful information that you can then turn into tactical and strategic intelligence…There are many ways you can answer these questions. One of the easiest is with COMINT. Tactical COMINT is easy. It doesn’t take much to listen for interesting dispatch calls. Strategic is not hard either. It just takes listening and taking notes over a period of time.