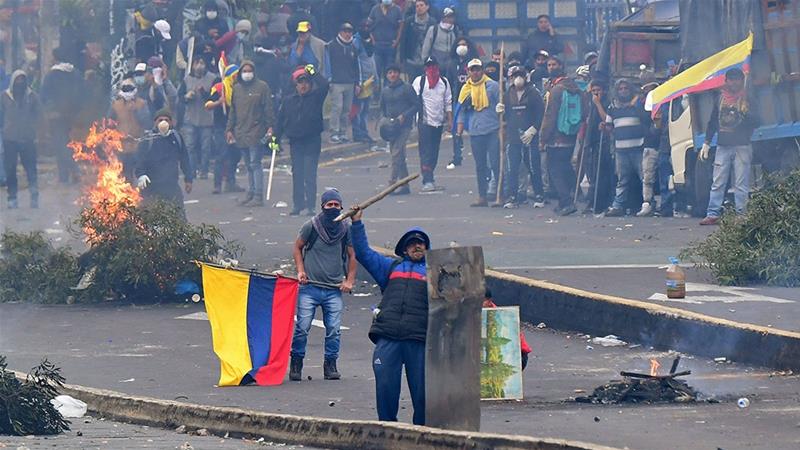 Jose Martinez, who escaped the unrest in Venezuela, writes this article for The Organic Prepper about the current unrest in Ecuador and signs of unrest in general.

…A couple of weeks ago, everything was so quiet in Ecuador that it was even boring. Don’t believe me? Watch the news. A few days ago, a violent mob kicked out the police out of their way and invaded the National Assembly (something very similar, indeed to what happened in Venezuela).

A very volatile situation is brewing in all of South America.

Countries that had been relatively peaceful are now (thanks to the hidden terrorists sent by the Maduro regime) a powder barrel. The timing could not be worst for me and my reduced family group. An old illness has come back and I´m struggling to recover at least partially before things get worst. Fortunately, we are in a popular neighborhood where there are lots of Venezuelans, and the people renting me have no complains because I´ve been quite a good tenant: no noises, paying on time (thanks to my extreme frugality and the generosity of a few readers, I have to acknowledge). They are a senior couple and hardly would allow me to get hurt by an angry mob or someone of my family. However, I´m ready to defend myself and mines.

OK, here´s the thing. Maybe you can have some indications in the nearby days about how bad things can get, all of a sudden. You won´t even notice it until you´re in the middle. If you don´t believe me just ask to Ecuadorians. They were caught in the middle of a geopolitical storm stirred from abroad. Looting, empty shelves as a result, and half of the country blocked because of the mobs. Tear gas, and shootings. Three young men thrown from a bridge by other angry enemies. Things like this happen when people are exposed, and unaware.

I want to tell you something. I’m not in my better moment these days. But every time I need to go outside for some reason, I do it with the firm, strong idea in my mind, of defending myself and my family (and the means to do it). Being partially impeded, defense will have to be lightning quick and disabling. No mercy and I am sorry about this, but it’s true. It’s the survivor’s mind setup clicking in since I saw the chain of events. Facing the law afterward? Sure, as much as the taken down predators face it too. There is footage of an angry mob (identified with leftist guerrilla colors by the way) beating with batons innocent people inside a building. Same as Germany in the 30s. Jeez.

If for some reason in the future these few paragraphs save your life or someone’s you love, I will feel rewarded.

Although our exposition to xenophobic behavior has been minimal, I´m pretty aware how bad things can get under the current social climate. Therefore, signals definitely can´t be ignored. Every society of the world, unfortunately, seems to have the potential for civilian turmoil, and the possibility of the appearance of more or less organized gangs of marauders NEVER can be dismissed. (I´m sorry Canada, never been there but maybe even you have some percentage of this happening somewhere in the future).

Here are 6 signs that civilian unrest is impending or already occurring.

The first sign, of course, is bad looks when you walk on the street. Small groups of people (especially young men) staring at you? Don´t show fear, but leave the place fast, and find a safe spot. A shop, a restaurant, someplace with guards, preferably. If you´re classified as a “vulnerable” inhabitant (a migrant, ethnical minority, etc.) you know what I´m talking about. Don´t expose yourself and become gray. No one will open an investigation until much time afterwards an attack under these circumstances. And what we want to avoid is an attack…

Read the entire article at The Organic Prepper by clicking here.