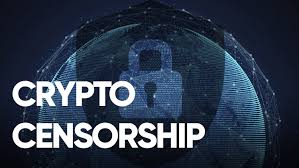 Vincent Zandri has written an article over on Medium.com about how YouTube is censoring various crypto-currency videos and/or threatening to shut down the accounts of those who post them. Governments and banking systems are against cryptocurrencies outside of their control. If you control the money (which they currently do), then you can control just about everything else – including people’s behavior.

The first threat to government of an independent and opaque currency is how do they control taxation or government revenue. Our current system of government graft, masquerading as democracy, is dependent on the reliable extraction (some would say theft) of money from the populace on an ongoing basis. When people are receiving payments and making purchases in an encrypted medium, how does the government collect its cut?

Second, control of the money/banking system allows the government to control people’s behavior. As an extreme example, how many people will join an uprising against the government, knowing that their bank account will be frozen or seized so that they cannot pay their mortgage, or rent, or buy food? Or if their retirement fund/children’s college fund, etc. is seized? People already worry about making certain entirely legal banking transactions because the know or worry that the government or banking system will have information about them that either invades a person’s privacy or flags them for criminal investigation.

Altcoin Daily, a popular Bitcoin and crypto education video channel is alleging that YouTube is not only censoring theirs and many other crypto channel’s online content, they are threatening to shut them down altogether. The popular, Google owned, video-sharing platform is slapping many sites like Altcoin Daily with an accusation of “sale of regulated goods,” which is akin to selling alcohol or drugs to the general public and/or minors. As far as I can tell, Altcoin Daily doesn’t sell so much as a stick of gum to anyone. The two twin brothers who run the channel don’t offer financial advice, rather, they describe themselves as “crypto enthusiasts” who offer crypto news with a heavy focus on Bitcoin.

Click here to read the entire article at Medium.com.