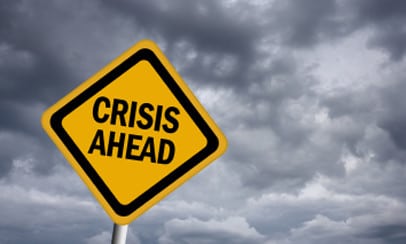 John Wilder at Wilder, Wealthy, and Wise has written a someone what long, and maybe slightly rambling but still good, piece on crisis stages that we may see with Covid-19. Eight Phases of Crisis – Covid-19 Edition is a couple of weeks old, now, but still germane.

…Here are, as near as I can determine, Eight Stages of a Crisis™, a level at which each crisis can be evaluated compared to the other – this is my modification of work originally done by Zunin and Myers.  This is like the Kübler-Ross five stages of grief, but with the apocalypse in mind.  Why settle for one death, when you can have millions or billions on your mind?  It’s so nice and cheery.  The nice part of using this model is that you can gauge where we are in the current COVID-19 mess.

This is the opening stage of a crisis.  It may be short, as in 9/11, or it may be a slow-motion collapse like the gradually increasing troop buildups and mobilizations that led to World War I.  Everyone wanted to stop it, but no one was sane enough to say “no.”  The Warning before the first Civil War was literally decades in length.

In the current COVID crisis, The Warning came during and just after the December impeachment.  With the focus of the country elsewhere, who cared about the flu?  We don’t trust the media very much.  Why?  They don’t seem trustworthy.  Example:  when Trump shuts down air transport to China, CNN® says it’s racist.  When China shuts down air transport from the United States, CNN™ says it’s a wise and prudent move by China’s benevolent leadership…

The Event is generally not long, but it can be.  It’s the Shot Heard Round the World at Lexington and Concord in the Revolutionary War.  The Event is when the rules change forever, and nothing can ever make the world go back to the way it was.  It’s the spark that lights the fire.  When people look back, everyone can see The Event.

Nothing is ever the same afterwards – The Event changes everyone that it touches, and often ends up changing systems permanently.  It is disruptive.  It may not be the reason that everything fails, it might just be a small event toppling an already unstable system.  In a crisis like 9/11, the event is obvious and instant.  COVID-19 has led to a slow-rolling avalanche across the economy.  Was it poised for a fall anyway?  Possibly…

When things have changed, and changed drastically, people refuse to believe it.  When the power is out because a tree fell on the power lines, I will walk into a room an automatically flip the light switch.  Why?  Habit, partially.  But there’s a part of my mind that is existing in Disbelief, perhaps, that doesn’t believe that the power could ever be gone.

Disbelief isn’t a coping strategy, and it’s not an attempt of the mind to protect itself, at least in a healthy person.  It’s more inertia.  You’re used to the world being a certain way, and when it isn’t, part of your mind isn’t quite ready to process it…

At some point, the mind is confronted with the new reality and forced to accept it.  But the rules are new, and unknown.  What to do?  One could take a deep breath, and review the situation and think logically or?  One could Panic.  Panic is easier, and doesn’t require a lot of thought.

While the Panic is ongoing, the first glimmer of Heroism starts to show.  Brave men and women working in the medical field are the first signs of Heroism.  Donald Trump talking with Al Sharpton to address the problems he sees is Heroism – realizing that there is a greater good, and that sacrifice is required.  Heroism is embodied throughout the response to the crises where a few have an opportunity to save many, and where enemies put aside squabbles for a time because it’s the right thing to do…

Keeping order requires energy.  Some part of the energy of the system is put into keeping order.  In a time of significant social cohesion, like World War II, the United States didn’t face The Cliff, even though virtually every other developed nation did.  Instead, the energy that the crisis took was replaced by people working together.

Most of the time in a real crisis, however, there’s The Cliff.  I wrote about it here: Seneca’s Cliff and You.

We have not fallen off The Cliff.  Is it certain that there is one?  No.  But every single leader, elected or appointed, is acting like it’s there.  I believe we will see it.  The new normal will be grow from events moving quickly.  Already at Wilder Redoubt, we’ve had nothing but home cooked meals for the last week, with a couple of store-bought sandwiches being the exception.

Will home cooked food, family dinners, and homeschooling be the legacy of COVID-19?

I expect that we’ll see The Cliff soon enough…

After the fall, things suck.  We had heroes, but the time for Heroism is over.  Disillusionment sets in when things don’t snap back to normal.  Things will seem rosy, only for failure to crush hope.  The more government “helps” during this phase, the worse recovery will be.  Roosevelt “helped” so much during the Great Depression that he extended it for years.

But politicians will take drastic steps, because they can’t help themselves.  The length of time Disillusionment lasts?  Months to years…

This is the other side of The Cliff.  Whereas, as Seneca said you go down a cliff pretty quickly, you only build up slowly.  Rebuilding the economy will take years.  If we do it right, we’ll build a stronger economy, less dependent upon foreign supply lines, that guarantees freedom while preserving the traditional values that built the wealth in the first place.

If done poorly?  The system is controlled, oppressive, and coercive…(continues)

Click here to read the entire article at Wilder, Wealthy, and Wise.