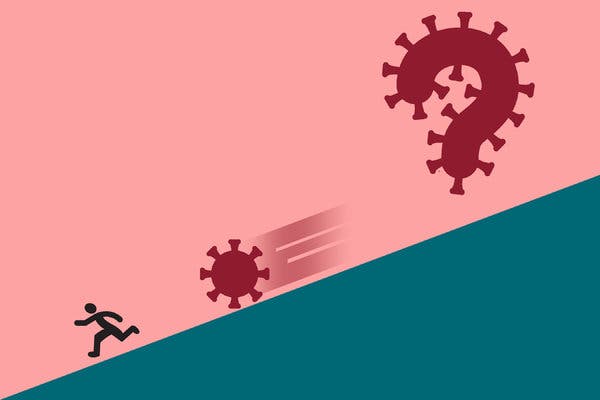 NYT bestselling author Mark Manson writes about the confusion, lies and general contentiousness of the current pandemic in Nobody Knows What Is Going On. Occasional strong language ahead. His basic premise is that we’re still learning about this disease and no one really knows how bad (or not bad) it is. Some doctors say it’s just the flu. Other doctors say young, healthy people are dying from stokes caused by the virus. Everyone is contradicting each other, so people are reverting to believing whatever they want to believe or whatever aligns with their political outlook or whatever aligns with their financial interest and so on.

Right now, we have two large, complex systems. The first is a virus sweeping through the global population and our combined efforts to mitigate it. The second is a declining global economy. Both systems are incredibly difficult to measure and understand, much less predict. Both are so large and unruly that we struggle to even comprehend them in their entirety. And so far, pretty much everything we’ve thought about either has been utterly wrong.

Let’s start with the first system: the spread of the virus. Despite months of research and testing, we still know very, very little. For example, we know that the virus is highly contagious, but we still have no clue how contagious. Studies pin its R0 number (how many people each sick person goes on to infect) as high as 6.6 and as low as 1.4. For reference, that’s like saying the virus will infect anywhere from 20% of the population to 80%, a range so broad that you might as well pick a number out of a hat.

What about how many people have been infected? A series of studies came out in the past week showing that infections have likely been vastly undercounted and that there are thousands (perhaps millions) of people out there who have been infected but had no symptoms. This would be big news, because it would suggest that the virus is far less deadly than we thought. A recent Stanford study argued that the real mortality rate could be from 0.12% to 0.2%, making coronavirus hardly more deadly than the seasonal flu (which has a mortality rate of 0.1%). The problem is that these studies relied on inaccurate tests, did not test people randomly, and had other major methodological errors.

A few weeks ago, the US government’s estimate of 240,000 deaths seemed so absurd that they revised it down to 60,000. Now that number seems completely absurd and will likely need to be revised much higher again. The cherry on top of the shit sundae, of course, is the US president talking about beaming ultraviolet rays through our bodies as though we live in an episode of Star Trek… and then following that up by suggesting that maybe we inject ourselves with disinfectants.

And that’s only the first system we’re wrestling with. The second is our economic system. Within a span of a couple weeks, the travel, hospitality, entertainment, restaurant, and brick and mortar retail industries have practically been annihilated. Just in the United States, 26 million people have lost their jobs in a little more than a month; an unemployment rate that rivals The Great Depression (note: this number is also likely being undercounted). The consensus is that we are certainly entering into a recession with whisperings of the D-word… no, not that D-word… the Depression D-word. The International Monetary Fund has said that we are potentially entering a global depression that will rival the 1930s in its depth and scope.

It’s for this reason that working class people have begun protesting and rioting in the western world, demanding economic relief. Leaders and pundits have come out arguing that lockdowns are a “cure worse than the virus itself.” Others argue that because the virus disproportionately affects the elderly, we should only tell old people to stay home and let the rest of the population build immunity as quickly as possible.

But there are many problems with these arguments. The first is that we don’t even know if herd immunity can exist. We do not know how long immunity lasts for COVID-19. People who contract many of the other coronaviruses only remain immune for a short period of time. Sadly, there have already been a number of reported cases of people contracting COVID-19 twice. If people only remain immune for a few weeks or months, then herd immunity will be impossible.

Second, while the virus is far more dangerous to the elderly, it’s no cakewalk for some of the young as well. There are reports of long-lasting damage to lungs, hearts and potentially even brain stems of those who have been hospitalized. Doctors are seeing strange numbers of infected young patients dying of strokes. On a new subreddit for people who have tested positive to share their experiences, there are horror stories of 25-year-olds on ventilators and people with persisting symptoms over a month later.

Third, re-opening the economy is not a magic bullet. As I wrote a couple weeks ago, nobody is going back out to a crowded public area any time soon, even if they are open. Would you go to a concert next week? I sure as fuck wouldn’t. What about next month? Next year? Lock down or not, tens of millions of people are going to stay home no matter what, guaranteeing that consumer spending remains in the toilet and tens of millions remain unemployed.

Fourth, we don’t even know that the economy was healthy in the first place. Some of the greatest investors in the world such as Ray Dalio have been arguing for years that we were due for a once-in-a-century collapse. For years, many pointed to negative interest rates and high levels of debt as a ticking time bomb waiting to go off. A pandemic may actually not be the cause of our economic woes, but merely the proverbial straw that broke the camel’s back.

We just don’t know a damn thing. Nobody does. So, stop acting like you do.

Click here to read the entire article at MarkManson.net.