Chris Warren at Off Grid Ham has another good article up on small solar arrays for power, Small Solar Can Give Big Results…If You Play It Right.

You’ve probably seen the campy ads hawking small solar power systems and “solar generators”. These ads make some remarkable claims and the manufacturers are deliberately vague on the technical specifications of these products. They further fuzz up the facts with unrealistic depictions of hypothetical situations. small solar power

I especially get a chuckle from the TV commercial showing happy, cheerful kids playing a board game in a large, well-lit house during a power outage and raging storm outside. The entire house is powered by, we’re supposed to believe, the advertised product which is a small battery pack weighing almost nothing and fits under the bed. Are small solar power systems worthwhile, or are they junk? As anyone with at least one functioning brain cell should suspect, the truth lies somewhere in the middle grey area.

This video was recently posted to the Off Grid Ham YouTube channel. It’s just over three minutes long and demonstrates the power of small scale solar.

Small scale solar has been addressed on this blog before, and my advice is still the same. If you are looking to take amateur radio off grid with solar, your best option is a purpose built home brew system made from components that you personally selected for your application. Furthermore, a DIY system is almost always less expensive. If you don’t care about cost and just want a plug-and-play “solar generator,” then by all means go drop several hundred dollars for a glorified battery in a box (you’ll lay out another few hundred on a matching panel to charge it). To be fair, it’s a very cool looking box but in the end you’re only paying for looks so in that regard you’re getting your money’s worth. small solar power

I’m not knocking the functionality of these products. They actually do work very well if used within reasonable expectations. I’m sour on them because of their breathtaking price tags and marketing that vastly oversells their capabilities. The ads are targeted to non-technical people who will not bother or know to ask the right questions. The technically-savvy people who know what to look for will have a hard time finding even basic specifications such as amp-hour ratings on batteries. The information is usually dumbed down with generic statements like, “runs a laptop for twelve hours!” small solar power

The bottom line: They work, if you keep it real. 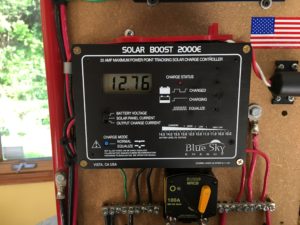 The bottom line is that small solar power systems do work, up to a point. Forget about powering your house through a storm with anything that will fit under a bed, unless there is physics-defying alien technology out there I haven’t heard of yet. But if you need to run a QRP radio, charge up your handhelds, and have some juice leftover for other needs, a little 50-150 watt solar setup paired with a modest battery should suit the job just fine. And you don’t need to plop down six hundred-plus dollars to do it.

In the video a continuous 50 watt load is easily supported by the small system. It gets better: The system in the video is overbuilt for a 50 watt load. I used it for demonstration purposes, but you could get by with much less…(continues)