Michael Krieger of Liberty Blitzkrieg writes about recent rioting and government tyranny in We’re in the Thick of It Now – What Happens Next? 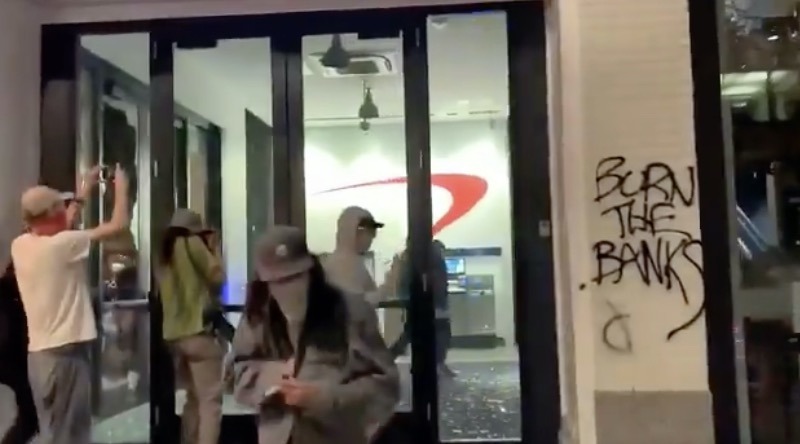 It’s with an extremely heavy heart that I sit down to write today’s post. Although widespread civil unrest was easy to predict, it doesn’t make the situation any less sad and dangerous. We’re in the thick of it now, and how we respond will likely determine the direction of the country for decades to come.

If the combination of peaceful protesting, looting and violence witnessed across American cities over the past few days completely caught you off guard, you’re likely to come to the worst possible conclusion about what to do next. The knee-jerk response I’m already seeing from many is to crush the dissent by all means necessary, but that’s exactly how you give the imperial state and oligarchy more power. Power it will never relinquish.

What’s happening in America right now is what happens in a failed state.

The U.S. is a failed state. Now the imperial national security state is going to flex at home like never before.

I spent the last decade of my life trying to spread the word to avoid this, but here we are.

I don’t think people understand the significance of the President declaring “Antifa” a “terrorist organization”. The Patriot Act and provisions of the NDAA of 2012 make this frightening. Because Antifa is informal it puts all protestors in danger–like declaring them un-citizens.

GOP @SenTomCotton: “If local politicians will not do their most basic job to protect our citizens, let’s see how these anarchists respond when the 101st Airborne is on the other side of the street.” pic.twitter.com/NyojLoOEAT

The pressure cooker situation that erupted over the weekend has been building for five decades, but really accelerated over the past twenty years. After every crisis of the 21st century there’s been this “do whatever it takes mentality,” which resulted in more wealth and power for the national security state and oligarchy, and less resources, opportunities and civil liberties for the many. If anything, it’s surprising it took so long to get here, partly a testament to how skilled a salesman for the power structure Obama was.

Your election was a chance to create real change, but instead you chose to protect bankers while looting the economy on behalf of oligarchs.

You and Trump aren’t much different when it comes to the big structural problems, you were just better at selling oligarchy and empire. https://t.co/QuSQNApeLY

The covid-19 pandemic, related societal lockdown and another round of in your face economic looting by Congress and the Federal Reserve merely served as an accelerant, and the only thing missing was some sort of catalyst combined with warmer weather. Now that the eruption has occurred, I hope cooler heads can prevail on all sides.

On the one hand, you can’t pillage the public so blatantly and consistently for decades while telling them voting will change things and not expect violence once people realize it doesn’t. On the other hand, street violence plays perfectly into the hands of those who would take the current moment and use it to advocate for a further loss of civil liberties, more internal militarization, and the emergence of an overt domestic police state that’s been itching to fully manifest since 9/11.

It’s my view we need to take the current moment and admit the unrest is a symptom of a deeply entrenched and corrupt bipartisan imperial oligarchy that cares only about its own wealth and power. If people of goodwill across the ideological spectrum don’t take a step back and point out who the real looters are, nothing’s going to improve and we’ll put another bandaid on a systemic cancer as we continue our longstanding march toward less freedom and more authoritarianism.

Cops and protesters banging heads while bankers sit at home drinking wine with their newly printed Federal Reserve dollars. Same as it ever was.

You have to hand it to them, looting on a massive scale by laundering it through the stock market is an ongoing act of evil genius.

Everything we’re seeing tonight is as sad as it was predictable. If we want to turn this thing around we need to start addressing our severe systemic problems at the root level. If we fail to do so, you can expect more of the same and worse.

While we aren’t going to solve everything at once, something should be done as soon as possible to at least partially address current anger and frustration.

Clearly there’s a major problem when it comes to policing in America, particularly in poor inner-city communities. Let’s start by ending qualified immunity.

Qualified immunity, created by the Supreme Court in the 1970s, shields police and other government officials from liability in civil rights lawsuits when the illegality of their actions was not “clearly established” at the time of the offense.

While it may seem like George Floyd’s right to not be choked to death by a police officer would be rather obvious, the fuzzy phrase “clearly established” has evolved over time to become a pedantic and unforgiving standard. Plaintiffs are often required to go fishing for cases that match their exact circumstances, lest their lawsuit get tossed. Last year, a 9th Circuit Court of Appeals panel granted qualified immunity to an officer who, without warning, shot a 15-year-old holding an airsoft gun.

Ending qualified immunity may seem like a small thing, but it’s an important step toward adding some accountability to those in positions of power. As it stands, power at all levels in our society largely operates above the law. This applies to politicians, national security state operatives, CEOs, Wall Street, the police, and of course, Jeffrey Epstein. Those in positions to do the most damage to society are simultaneously most immune from the consequences of their actions. This is a core systemic problem in our country, so let’s take a small step and start with qualified immunity for police officers while the opportunity exists. From there we can turn our attention to the bigger fish.

Why didn’t the looters just buy stocks and bonds like normal criminals.

I understand my message will likely fall on deaf ears, and I’m used to things not going the way I want them to. I have no idea where society will go from here, but I know we’re at a key inflection point in our nation’s history. We can begin to turn this thing around, or we can go totally off the deep end. Try to be as creative, constructive and conscious as possible during these trying times.

See also Michael Snyder’s The Horrifying Civil Unrest We Have Been Warning You About Is Here, And America Is Literally Coming Apart At The Seams at TMIN.

For a very long time, many of us have been loudly warning the American people that this was coming.  The mainstream media and many of our national leaders have been fanning the flames of hatred, anger, frustration and division on a daily basis for many years, and it was just a matter of time before we witnessed an eruption of violence of this magnitude.  Over the last week, we have seen protests in at least 145 different U.S. cities, and reports of rioting, looting and violence are coming in so fast that it is literally impossible to keep up with them all.  So far, at least 40 U.S. cities have imposed curfews, the National Guard has been activated in at least 15 states, and at least 4,100 people have been arrested.  On Sunday night, the violence in Washington D.C. became so alarming that President Trump was actually rushed to a secret bunker under the White House…