Michael Krieger at Liberty Blitzkrieg writes about how elites try to divide the people in order to maintain power, and how you must keep your mind guarded to resist such efforts in Resist the Crazy.

As things felt like they were spiraling out of control last week, as Americans and people around the world were inundated with endless videos of street violence in addition to reactionary calls to deploy the U.S. military to cities across the country, the temptation to lose control of one’s mental faculties and basic humanity was heightened.

I saw evidence of this all around me. There was a dark and vicious energy in the air, and it felt contagious.

I’m sensing a very dark and vicious energy out there which seems to be affecting all sorts of people who normally wouldn’t be sucked into it.

I need to make a conscious effort to not have it influence me or my thoughts. If you’re feeling the same, try to retain sanity.

The responses to the tweet above were encouraging and demonstrated many others sensed the same thing and were likewise troubled by it. The overall madness of last week reminded me of the months following Donald Trump’s election. In both cases, the worldview of large numbers of people was shaken to its core. I think the root cause of the breakdown in both instances was that many people’s model of what is “normal” was suddenly shattered.

For example, the idea of Donald Trump being elected president was so incomprehensible and concerning to so many, they completely lost it when he won. Likewise, images of American cities burning amidst widespread looting caused another group to crack. Neither group had fully come to grips with how broken and corrupt the U.S. economy and society had become, and that these sorts of things happen when states begin to fail.

The reaction to Trump being elected from many of those traumatized by it was to try to remove him at all costs, even if this meant spreading an outlandish Russiagate theory for three years straight. Likewise, the knee-jerk reaction from many to the riots was to send in the military to crush them. In both cases, those who had their comfort zones shattered responded by trying to make the uncomfortable situation go away as soon as possible. Nobody wanted to ask why.

That being said, unless your life is in immediate danger, the best response to an event that shocks you to your core is to step back and take a deep breath.  You don’t have to like what’s happening, but you should consider what a productive or creative response to the situation might look like, as opposed to immediately resorting to an instant-gratification, emotionally charged, reptilian response. The response to a crisis is often worse than the crisis itself.

Someone mentioned to me that he tells all his friends: “you must stand guard at the door of your mind.” Great advice in general, but particularly necessary during times like these. This is also partly what it means to be more conscious, a topic I’ve written about extensively in recent years (see my series on Spiral Dynamics)

It’s never been more important for those who are somewhat conscious to remain that way, because just as consciousness can evolve, it can also devolve. Characteristic of an evolved consciousness is being able to acknowledge one’s own flaws and vulnerabilities. It means being aware of your more base instincts as a human, which means admitting that just as you have the capacity for love, compassion and generosity, you also have the capacity for hate, apathy and selfishness.

Being honest about this and attempting to confront it is key to evolving one’s consciousness, but ego tends to get in the way. The ego has an image it needs to maintain and protect, which ends up acting as a severe roadblock on the path to sustainable self-improvement. It affects and stifles everyone to varying degrees.

An old Cherokee is teaching his grandson about life. “A fight is going on inside me,” he said to the boy.

“It is a terrible fight and it is between two wolves. One is evil – he is anger, envy, sorrow, regret, greed, arrogance, self-pity, guilt, resentment, inferiority, lies, false pride, superiority, and ego.” He continued, “The other is good – he is joy, peace, love, hope, serenity, humility, kindness, benevolence, empathy, generosity, truth, compassion, and faith. The same fight is going on inside you – and inside every other person, too.”

The grandson thought about it for a minute and then asked his grandfather, “Which wolf will win?”

The old Cherokee simply replied, “The one you feed.”

It’s important to understand that virtually everyone considers themselves a good person. That person on the complete opposite side of the political spectrum whom you detest, thinks of themselves as a righteous warrior fighting for all that’s good and just. Everyone sees themselves in this sort of way to a greater or lesser degree, but not everyone can be right. So we divide ourselves into tribes that reinforce our views of how right and great we are, and how bad everyone else is. This prevents us from seeing where other people are coming from, and it prevents us from uniting on the really big issues that affect us all.

Moreover, there are people who understand this about human nature and intentionally use it against us. A perfect summary of how this plays out every day via social media can be found in the following excerpt from a post recently published at The Prepared.

You should also remember that the split-screen effect means media types can tell whatever story they want to tell. As in the Venezuela clip above, there are some outlets who focus on the peaceful and joyful parts of the present protests, and others who focus purely on the violence and chaos.

All of this stuff—the beautiful and the ugly—is really happening and really matters, but you have to be extremely careful in using news reports to develop a sense of how much of what is happening where. 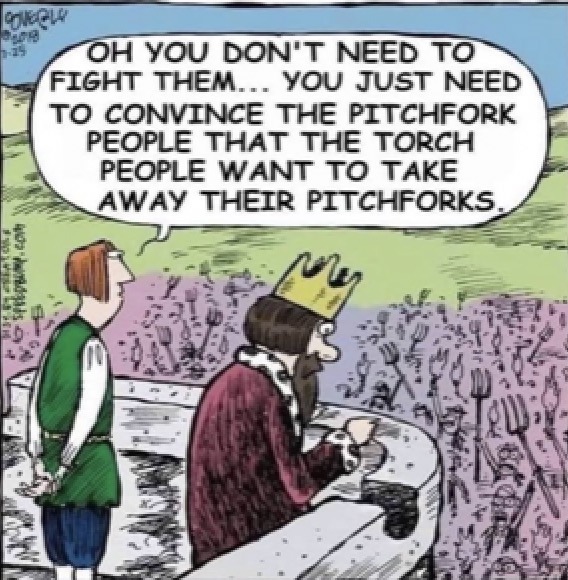 You need to be the guardian of your mind, and you need to recognize that people are constantly trying to push your consciousness into a fight or flight state where you’re malleable and easy to manipulate. There are times in life when fight or flight is appropriate to survive, but it’s not a healthy state of mind to resonate in over the course of an average day.

You can contribute to the crazy, or you can contribute in some other way.  A new world is on the horizon, but we need to be careful about how we go about building it. What the world desperately needs right now is more conscious people. From that well, a brighter future can be born.