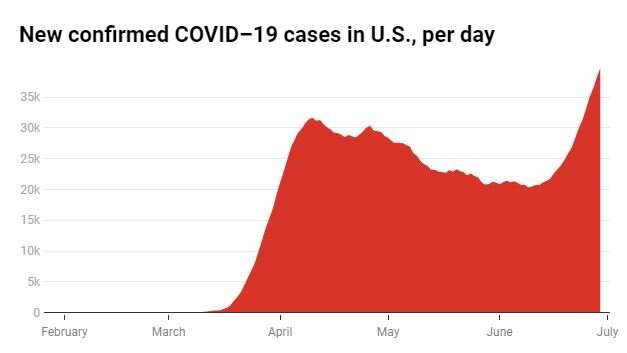 Toby Cowern at The Organic Prepper discusses the second pandemic wave and some things that you should be thinking of in order to be prepared in The Second Wave: Regardless of What You Think About the Virus, Things Are About to Change

…Regardless of your personal opinion about the virus, things will change for everyone with the second wave.

First, there’s GOING to be a second wave.

Firstly, we need to accept there is going to be a second viral wave. That is inevitable. That is absolutely inevitable. Now, regardless of your feelings on how bad the pandemic is, how lethal the virus is, what you think of the statistics, or the reporting, etc. I am not going to say that’s irrelevant, but I am going to say that it doesn’t undermine is the fact there’s going to be a second wave. Secondly, for any virus that spreads in the general population spread, there is always a risk of mutations, so just because we could say it hasn’t potentially been “that bad” until now, doesn’t mean that’s the status quo, and it’s going to stay the same.

Now, here’s what’s important about that. Looking at historical trend analysis, which is fairly substantive, the second wave is always going to be worse than the first, not only in infection and fatality numbers but also in overall impact. And why is that? The fact is, the number spike will largely be due to people’s actions as they come out of the lockdown of wave one.

That’s happening and it’s happening worldwide. It is not exclusive to any country. Many, many countries are suffering from this same problem. This isn’t speculative. You can all see this occurring with your own eyes. So these actions are going to be reflected in wave two infection numbers.

For those countries already into the second wave, you can see that wave one is being dwarfed. For those that are not into the wave two yet, don’t worry, unfortunately, you’ll catch up in time.

Now, the control measures that the government will try to utilize for wave two will initially be the same actions as wave one, but they just won’t be as readily accepted by the vast majority of the population that came through wave one. People are tired, they are frustrated and angry, and they are scared, largely due to exceptionally irresponsible media action.

That will vary from region to region and country to country as to how vehemently these measures will be pushed back against. The other thing to consider is that people have now had far longer and got far more information to make up their mind on how they feel about certain things. People went into wave one really in the dark. They were able to look at the historical pandemic examples, but not much more. Now, people have read up and formed their own opinion, and begun to crystallize their own thought processes AND will act (or refuse to act) accordingly.

All the problems that occurred in wave one will reoccur in wave two, possibly with more consequences and/or potentially with a deeper meaning. Let’s start with the supply line.

The weakening of the supply lines that has occurred, the lack of certain products, the panic buying, the herd mentality – that’s all still there, and large parts still ‘unsolved’ and it’s going to happen again, it’s inevitable. Things are not “going back to normal.”

I hate to say it, but people in packs, follow very set scripts. They are very predictable in their behavior. That is why we can make statements such as these with good authority. And as much as the suppliers are trying to assure us wave one was ‘well managed’ and ‘not that bad’, reports from various places are showing the contradiction that there was, is, and WILL BE impact on the supply line.

Now, there’s a twofold solution to these problems we are highlighting. One is just to keep preparing to always be prepared, keep chipping away, bit by bit, keep making your purchases, keep your stocks up.

But unfortunately, a lot of people got massive economic hits in wave one. So many are likely limited in their financial ability prepare via purchase. That we fully understand and sympathize with.

Things are going to be different for most of us.

That brings us to the next point, and I would apply this across the board, regardless of your current situation, is you need to start managing your own and your immediate family’s expectations. You need to start thinking in terms of this:

Now this is very challenging because you will still naturally want to push back to get that “normalcy.” You’ll think, “Why should I have to *insert selected discomfort here*?”

Unfortunately, far too many people in the preppersphere were preparing on the basis of:

“My lifestyle is never going to be interrupted no matter what.”

When we’re into a long-term scenario, such as this pandemic, there are going to be uncomfortable impacts for everybody.

There will be a point when you will start to feel the impact after you’ve gone as far as you can in your familiar lifestyle and kept to your original standards for as long as possible. If we are being honest, many of you are already at this point.

As much as you can adjust your mental attitude early and acknowledge and start to accept that the impact is happening, or coming, and will worsen, it positions you to be far more resilient further into this pandemic. Because that, folks, is where we are.

We are a LONG way from the end of this.

We can’t relax our preparations.

I’ve been having a number of very interesting online conversations lately, and the phrase that keeps re-occurring is that we’ve been given a “slow-burning virus.” In this modern, insanely paced world, it seems that everybody wanted to have a simple, quick ‘zombie apocalypse’, and in two weeks, it’s all over. Then we kind that we go from there, rebuild, and move on…(continues)