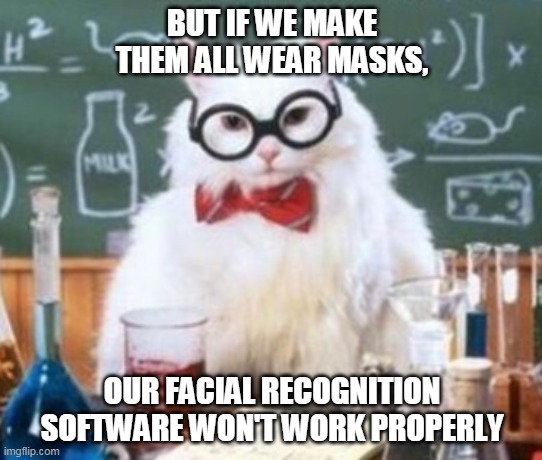 There has been a lot of controversy over masks, but no matter what you think about the efficacy of face coverings in preventing the spread of COVID-19, there is one advantage to masking up. The U.S. Department of Homeland Security (DHS) has expressed concern that widespread use of masks will thwart facial recognition.

A DHS “intelligence note” dated May 22 came to light in the BlueLeaks trove of law enforcement documents. The DHS Intelligence Enterprise Counterterrorism Mission Center in conjunction with a variety of other agencies, including Customs and Border Protection and Immigration and Customs Enforcement drafted the note. It “examines the potential impacts that widespread use of protective masks could have on security operations that incorporate face recognition systems — such as video cameras, image processing hardware and software, and image recognition algorithms — to monitor public spaces during the ongoing Covid-19 public health emergency and in the months after the pandemic subsides.”

According to The Intercept, the Minnesota Fusion Center distributed the notice on May 26, as protests over the killing of George Floyd were ramping up. “Email logs included in the BlueLeaks archive show that the note was also sent to city and state government officials and private security officers in Colorado and, inexplicably, to a hospital and a community college.”

The note warned, “We assess violent extremists and other criminals who have historically maintained an interest in avoiding face recognition are likely to opportunistically seize upon public safety measures recommending the wearing of face masks to hinder the effectiveness of face recognition systems in public spaces by security partners.”

“We assess face recognition systems used to support security operations in public spaces will be less effective while widespread public use of facemasks, including partial and full face covering, is practiced by the public to limit the spread of Covid-19.”

A recent report revealed that the federal government has turned state drivers’ license photos into a giant facial recognition database, putting virtually every driver in America in a perpetual electronic police lineup. The revelations generated widespread outrage, but this story isn’t new. The federal government has been developing a massive, nationwide facial recognition system for years.

The FBI rolled out a nationwide facial-recognition program in the fall of 2014, with the goal of building a giant biometric database with pictures provided by the states and corporate friends.

In 2016, the Center on Privacy and Technology at Georgetown Law released “The Perpetual Lineup,” a massive report on law enforcement use of facial recognition technology in the U.S. You can read the complete report at perpetuallineup.org. The organization conducted a year-long investigation and collected more than 15,000 pages of documents through more than 100 public records requests. The report paints a disturbing picture of intense cooperation between the federal government, and state and local law enforcement to develop a massive facial recognition database.

“Face recognition is a powerful technology that requires strict oversight. But those controls, by and large, don’t exist today,” report co-author Clare Garvie said. “With only a few exceptions, there are no laws governing police use of the technology, no standards ensuring its accuracy, and no systems checking for bias. It’s a wild west.”

There are many technical and legal problems with facial recognition, including significant concerns about the accuracy of the technology, particularly when reading the facial features of minority populations. During a test run by the ACLU of Northern California, facial recognition misidentified 26 members of the California legislature as people in a database of arrest photos.

With facial recognition technology, police and other government officials have the capability to track individuals in real-time. These systems allow law enforcement agents to use video cameras and continually scan everybody who walks by. According to the report, several major police departments have expressed an interest in this type of real-time tracking. Documents revealed agencies in at least five major cities, including Los Angeles, either claimed to run real-time face recognition off of street cameras, bought technology with the capability, or expressed written interest in buying it.

In all likelihood, the federal government heavily involves itself in helping state and local agencies obtain this technology. The feds provide grant money to local law enforcement agencies for a vast array of surveillance gear, including ALPRs, stingray devices and drones. The federal government essentially encourages and funds a giant nationwide surveillance net and then taps into the information via fusion centers and the Information Sharing Environment (ISE).

Fusion centers were sold as a tool to combat terrorism, but that is not how they are being used. The ACLU pointed to a bipartisan congressional report to demonstrate the true nature of government fusion centers: “They haven’t contributed anything meaningful to counterterrorism efforts. Instead, they have largely served as police surveillance and information sharing nodes for law enforcement efforts targeting the frequent subjects of police attention: Black and brown people, immigrants, dissidents, and the poor.”

Fusion centers operate within the broader ISE. According to its website, the ISE “provides analysts, operators, and investigators with information needed to enhance national security. These analysts, operators, and investigators…have mission needs to collaborate and share information with each other and with private sector partners and our foreign allies.” In other words, ISE serves as a conduit for the sharing of information gathered without a warrant. Known ISE partners include the Office of Director of National Intelligence which oversees 17 federal agencies and organizations, including the NSA. ISE utilizes these partnerships to collect and share data on the millions of unwitting people they track.

Reports that the Berkeley Police Department in cooperation with a federal fusion center deployed cameras equipped to surveil a “free speech” rally and Antifa counterprotests provided the first solid link between the federal government and local authorities in facial recognition surveillance.