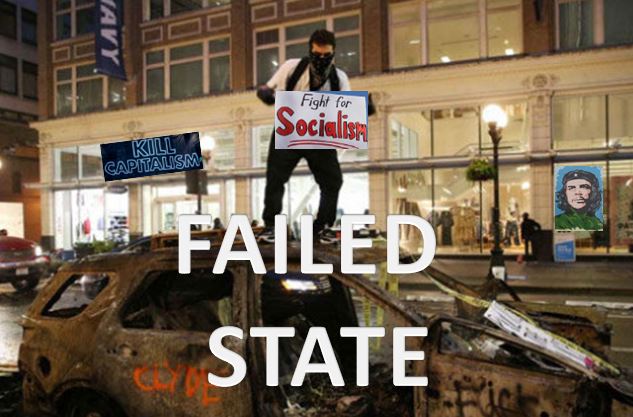 Even as I write the title for this article, I wonder: Is that in fact possible? Can we be prepared for a hostile takeover?

The other day I was speaking with a friend about the ongoing insanity in some of our greatest cities: Seattle, Boston, NYC. We bemoaned the reappearance of the “democratic socialist” in the United States. It seemed incomprehensible to us—and horrifying, like a slow-growing metastasis or an insidious dementia.  I wondered how we could prepare ourselves for the eventuality of a horde of lunatics reaching our otherwise peaceful community or worse—occupying the White House.

With years of experience as a doctor of pharmacy in critical incident work, including 9/11, she was the right person to ask. I also knew that her understanding of these things had been shaped by having had a father who risked his life in the Dutch Resistance, survived and escaped three concentration camps, and lived to be liberated from Nazi Europe. He was a complex man with a two-sided nature: aloof and critical but also a hero, having sacrificed a good part of his health and emotional well-being in order to save Jews and Christians he didn’t even know.

I asked her a simple question: if you had a time machine and wanted to warn your father, or the Jews or Ukrainians in the late ’20s and early ’30s, what would you tell them?

Her response surprised me: “Keep your eyes open, look for the truth, don’t be afraid to speak up, keep the faith and trust in God.”

While I wholeheartedly agreed with her reliance on the Lord, my heart co-opted my tongue with the words I had expected to hear from her:  “I would tell them to run as fast as they can, now, get out, drop everything and come here, to us.” The image of a hen gathering her chicks with the shadow of a hawk passing overhead came to mind.

And in 1932, that was a blessed and real option. Today, for us, however, there’s no “us” anywhere else. Where would we go? France? The United States, the last great hope of millions upon millions of refugees, is under siege from within. It appears that in this world, as Americans, we really are on our own.

Is there more than one way to be prepared? Is there any way to be truly prepared? The following are just some options.

Prepare by Arming Ourselves.

The first piece of legislation enacted after Hitler took power was the confiscation of weaponry in the civilian population.

He was a madman, but he was no fool. He knew that you couldn’t shove a well-armed populace into cattle cars or ghettos.  We know that the next step in Germany was to defund the police. The only weapons then were in the hands of goose-stepping soldiers.

In the Second Amendment of the Constitution our forefathers saw the danger of ever- consolidated power in an oligarchic government and they made the most important provision…resistance.

A well regulated Militia, being necessary to the security of a free State, the right of the people to keep and bear Arms, shall not be infringed.

This form of preparation is normally best left in the hands of younger people who have access to the wisdom of the experienced. Whether that’s possible given our current demographic status is the subject of another discussion.

Prepare by Building a Cache.

It is a common understanding that Mormons have a year’s supply of foodstuffs and other essentials in the basements of their homes. The toilet paper craze of 2020 has made the wisdom of their ways perfectly clear. Things we took for granted as ubiquitous can disappear overnight.

What to store? Tools, batteries, warm clothes, paper towels, candles, precious metals, freeze-dried foods, medicines, water, water and water. Have a list. Don’t forget a freshly-stocked backpack, cash or some other form of tender.  A subset: keep a percentage of your portfolio liquid and readily available.

Prepare to Take a Stand

At some point you will be called either to stand up for what you believe and what you know is right or to surrender. To take a stand, you may be required to lay down your life.

The stakes might just get that high. Take stock. Be honest. What do you stand for? What are you willing to die for? To live for? How important is liberty? How important is comfort? Consider an older call to stand in strength:

Who is going to harm you if you are eager to do good? But even if you should suffer for what is right, you are blessed. “Do not fear what they fear; do not be frightened.” 1 Peter 3:13-14

Prepare in the Spirit

This is, in my mind, the most important option. We are still one nation under God, whether or not it “trends.” It entails that we take the time now to cultivate relationships, spend time in prayer, and trust in the right things, which are overwhelmingly not in this world. On the geopolitical map in the natural world, we may be alone, but in truth we are not. We are held together and empowered by the Creator who really does know what He is doing. Even when we can’t see it…or understand it. And, when (or if) the time comes for us to show what we’re made of, we may be braver and stronger than we can imagine from our more comfy vantage points right now.

My friend’s father is a powerful example, even 70 years later. She shared a story she’d only recently learned from her elderly aunt.

Her father, who was about 18 years old at the time, had hidden the family car in a nearby woods, camouflaged by a thicket. He’d kept it so he could smuggle Jews out of Germany and into homes with hiding spaces. On one occasion, with lives literally and immediately in the balance, he arrived at the border between Holland and Germany only to be confronted by soldiers who demanded to inspect his papers. He told them in perfect German that the commander himself had given him his orders. The soldier said, “We need to see the orders. We’ll call the commander ourselves.”

Thinking on his adrenalized feet, he said, “You go right ahead. He’s in a foul mood. Better you than me.”

They let him through.

Can you ever be prepared for something like that? I don’t know.

My husband is sure that washing his car is a ritual that inevitably brings rain. Sometimes I have a similar idea about preparations…if you spend a lot of time preparing and have it all perfectly organized, nothing will happen.

I sure do hope I’m right about that.