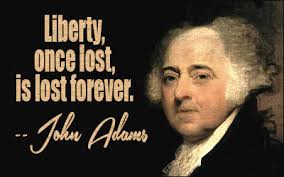 From the Tenth Amendment Center comes a short piece on the limited purpose of the US Constitition, The Constitution Wasn’t Written to Protect Your Liberty

One of the most biggest misconceptions I hear about the Constitution is that it was written to “protect our liberty.”

It wasn’t. At least not in a direct sense.

The confusion likely arises from the words of the Declaration of Independence.

“We hold these truths to be self-evident, that all men are created equal, that they are endowed by their Creator with certain unalienable Rights, that among these are Life, Liberty and the pursuit of Happiness.–That to secure these rights, Governments are instituted among Men, deriving their just powers from the consent of the governed.”

That’s all it does. Asking it to “protect your rights” is really asking too much. That wasn’t why it was written or ratified.

Now the Constitution does reflect the philosophy espoused in the Declaration in that it established a general government of limited, enumerated powers. The decentralized nature of the political system it created was intended to encourage liberty.

By strictly limiting the authority of the general government, the founding generation hoped it would never possess enough the power to intrude on our rights.

But there isn’t any provision in the Constitution that actually empowers the federal government to protect our liberty. In fact, the founding generation would have almost certainly considered that too much power for a general government to wield.

In practice, this means the federal government really doesn’t have any responsibility to “protect your rights” beyond staying within its constitutionally delegated powers. Its obligation isn’t to act in order to protect liberty, it is to not act outside of its legitimate authority.

In the same way, the Bill of Rights was never intended to empower the federal government to protect your rights. As the preamble to the Bill of Rights makes clear, it was intended to add “further declaratory and restrictive clauses” to the Constitution “in order to prevent misconstruction or abuse of its powers.” I have often said it would be better named “The Bill of Restrictions.”

But it’s ultimately up to us to hold it within its limits. Unfortunately, by insisting that the government “protect their rights” they are doing the exact opposite.