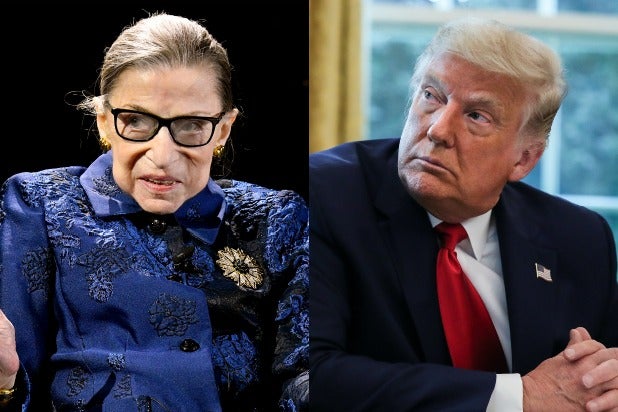 Yesterday evening Supreme Court Justice Ruth Bader Ginsburg passed away. This event will change the Presidential race and perhaps further fan the flames of division around the country. Expect to see and hear much commentary/propaganda in the months ahead. Here is a collection of commentary over at Zero Hedge – “This Resets The Race” – SCOTUS Opening Creates Opportunity For Trump To ‘Change The Subject’ Before Nov. 3

We’re still waiting for the ‘October Surprise’ that Democrats are hoping will derail Trump’s quest for a second term (although it didn’t exactly work out that way back in 2016), but the passing of Ruth Bader Ginsburg last night has certainly shaken things up, with only 45 days left until the election.

Biden, and his former boss, Barack Obama, have urged the GOP to wait until after the election to move ahead with the next SCOTUS nominee. As Biden said in the clip above: “There is no doubt – let me be clear – that the voters should pick the president and the president should pick the justice for the Senate to consider,” Biden told reporters late Friday. “This was the position that the Republican Senate took in 2016” and “that’s the position the United States Senate must take today and the election’s only 46 days off.”

According to Bloomberg, GOP strategists are already chattering about how the SCOTUS situation will give Trump the opportunity to change the subject away from the coronavirus outbreak that’s hobbled his economy, and toward what has been on of the GOP’s biggest accomplishments over the past 10 years: packing the federal courts with conservative justices.

It’s an area where Dems have ceded far too much ground, allowing the Federalist Society to work in concert with successive Republican administrations to ensure a steady supply of ideologically-tested conservative justices.

Ironically, Bloomberg quoted a top aide to former Democratic Senate leader Harry Reid saying that Dems need to “wake up” to the importance of the judicial branch. Of course, as we reported earlier, it was Reid who opened the door to the “nuclear option” by changing the Senate rules to allow President Obama to confirm cabinet appointments with a simple majority.

For Trump and his Republican allies in the Senate, the vacancy lets him change the subject away from the coronavirus pandemic that has imperiled his odds for winning a second term. Now, they can offer their base a chance to tighten the conservative majority on the high court for years to come.

Yet Biden and Democrats can seize on the moment, too, invoking Ginsburg’s legacy to spur turnout on Nov. 3 and give liberals a fresh reason to vote out Trump. Democrats had contributed more than $20 million to ActBlue in four hours after Ginsburg’s death was announced.

Jim Manley, a former top aide to ex-Senate Democratic leader Harry Reid, said he hopes Democrats “wake up” to the importance of the Supreme Court.

“The reality is that Republicans have always taken judicial nominations more seriously than Democrats,” he said. “My hope is that that actually changes with this shocking news. Whether it does or not remains to be seen.”

Mitch McConnell didn’t waste any time Friday night. Mere hours after RBG’s death, McConnell released a statement promising a vote on the Senate floor and calling on GOP Senators to back whoever is appointed by Trump to fill the vacancy. Right now, the smart money is on 7th Circuit judge Amy Coney Barrett, a conservative Catholic and a runner-up during Trump’s last two nominations.

GOP strategists are heralding this as an opportunity for Trump to flip the script, and put Democrats on the defensive.

“This resets the race,” said Republican donor Dan Eberhart. “We are not running solely on the Covid response and the economy anymore.”

Biden has rarely spoken about the Supreme Court except to commit to nominating a Black woman to the bench if he gets the opportunity.

Now he has to seize on the issue as well, and Democrats were already showing signs they were willing to join him.

Trump was widely expected to move ahead with a nomination, and Senate Majority Leader Mitch McConnell quickly vowed that the Senate would vote on it.

To be sure, there’s also a strong possibility that RBG’s death motivates more Democratic voters to turn out to the polls. Few things can cut through the noise like the creation of another ‘martyr’.

Early reports suggest RBG’s death triggered a flood of donations to Democratic groups like ActBlue and “Demand Justice”, with tens of millions of dollars flowing into their coffers overnight. GOP pollster and Trump critic Ed Rollins told Bloomberg that the gravity of the issue could drive voters to the polls in massive numbers. Typically, higher turnout is seen as a negative for Republicans.

It could also motivate more GOP voters to come vote in critical swing-state races down-ticket, including for the Senate.

“This will be the overarching issue in not just the 2020 presidential election, but also in several Senate races that may decide who controls the Senate in the future,” said Ed Rollins, a Republican strategist who heads the pro-Trump Great America PAC.

“This will drive voters to the polls in massive numbers on both sides,” Rollins said. “It will also dominate the airways and certainly will be a major factor for the rest of this campaign.”

Still, the vacancy may not necessarily be a boon for Trump because it is likely to galvanize voters on both sides of the aisle, said Brendan Buck, a Republican strategist.

“It will help shore up constituencies he needs. Battle lines are going to be drawn. But it will fire up folks on both sides, and my guess is it’s a wash at best for the president,” he said.

The Hill was slightly more pessimistic, pointing out that several influential Republican Senators were conspicuously silent last night, while others promised to back Trump’s nominee without delay.

McConnell can’t afford to lose three GOP votes in what could be remembered as one of the most important votes in that chamber in history. Two GOP senators – Alasaka’s Lisa Murkowski and Maine’s Susan Collins – released statements mourning Ginsburg…

My statement after hearing of the passing of Justice of United States Supreme Court Justice Ruth Bader Ginsburg: pic.twitter.com/1zhWSH5hhg

My statement on the passing of Supreme Court Justice Ruth Bader Ginsburg: pic.twitter.com/3Qy2aSCjw5

…but saying nothing about whether they intend to back McConnell and Trump. Both Collins and Murkowski were among a group of moderate senators who initially expressed doubts about Trump nominee Brett Kavanaugh, and later enabled Democrats to move ahead with a formal inquiry into allegations of sexually inappropriate behavior by Kavanaugh when he was in high school and an undergraduate student at Yale. Both have said previously that they wouldn’t support a SCOTUS vote so close to an election. Collins is facing tough reelection odds, as her vote in favor of Kavanaugh has been wielded effectively against her by her Democratic opponent, who is reportedly ahead in the polls. Maine House Speaker Sara Gideon currently holds 49% to the senator’s 44%, according to the Hill.

Murkowski has a long history of speaking out against a “double standard” of SCOTUS confirmation votes during an election year.

Murkowski told The Hill over the summer that attempting to fill a Supreme Court vacancy right before the November election or during a lame-duck session in December would create “a double standard” and she “would not support it.”

Murkowski pointed to Senate Republicans’ decision in 2016 to keep vacant the seat of late conservative Justice Antonin Scalia until a new president was elected in that year’s election. Then-President Obama nominated D.C. Circuit Court of Appeals Judge Merrick Garland to fill Scalia’s vacant seat in March of 2016 but he never received a Senate Judiciary Committee hearing or a vote.

“When Republicans held off Merrick Garland it was because nine months prior to the election was too close, we needed to let people decide. And I agreed to do that. If we now say that months prior to the election is OK when nine months was not, that is a double standard and I don’t believe we should do it,” Murkowski said. “So I would not support it.”

Another key vote is Sen. Mitt Romney (Utah), the only Senate Republican to vote to convict Trump on an article of impeachment.

Though he declined to speculate about what he might do if a vacancy emerged on the court in the months before the Nov. 3 vote, Sen. Mitt Romney could provide a third vote against Trump’s nominee (though a tie would of course be broken by VP Mike Pence).

A 4th GOP defection would sink the vote, assuming no swing-vote Dems step up and defect to the other side. However, that’s not exactly guaranteed. West Virginia Sen. Joe Manchin backed Kavanaugh, a vote that has proven tremendously popular in his home state of West Virginia.

Several reliably GOP senators will likely have their past statements used against them. Perhaps the most notable example of this is Lindsey Graham.

🔥“I want you to use my words against me. If there’s a @GOP president in 2016, and a vacancy occurs in the last year of the 1st term…let’s let the next president make that nomination.

However, Graham has said he’s open to backing Trump’s nominee after getting some input from his constituents, of course. Chuck Grassley, who led the Judiciary Committee when it sunk Garland’s nomination, said at the time that he would do the same thing if the shoe were on the other foot. However, he too is expected to back Trump’s nominee.

After all, Trump has a powerful argument for filling the seat. A deadlocked Supreme Court ahead of what could be a contested election could risk a constitutional crisis that could have ramifications for societal cohesion.

If SCOTUS is deadlocked 4-4 during post-election litigation, equal protection is a dead letter. Because ties affirm the appellate court’s decision, we will end up with split circuits and different rules and standards across the country. That is a recipe for chaos and division.

Time is also an issue: It has taken an average of 74 days to confirm the last 10 justices appointed to the Supreme Court, ranging from 99 days for Clarence Thomas in 1991 (a process that was elongated by the Anita Hill scandal) to 50 days for Ginsburg in 1993.

Election Day is 45 days away, and the next Congress isn’t scheduled to take its seats for another 106 days. And given the general state of things in America right now, a lot could change in that time.