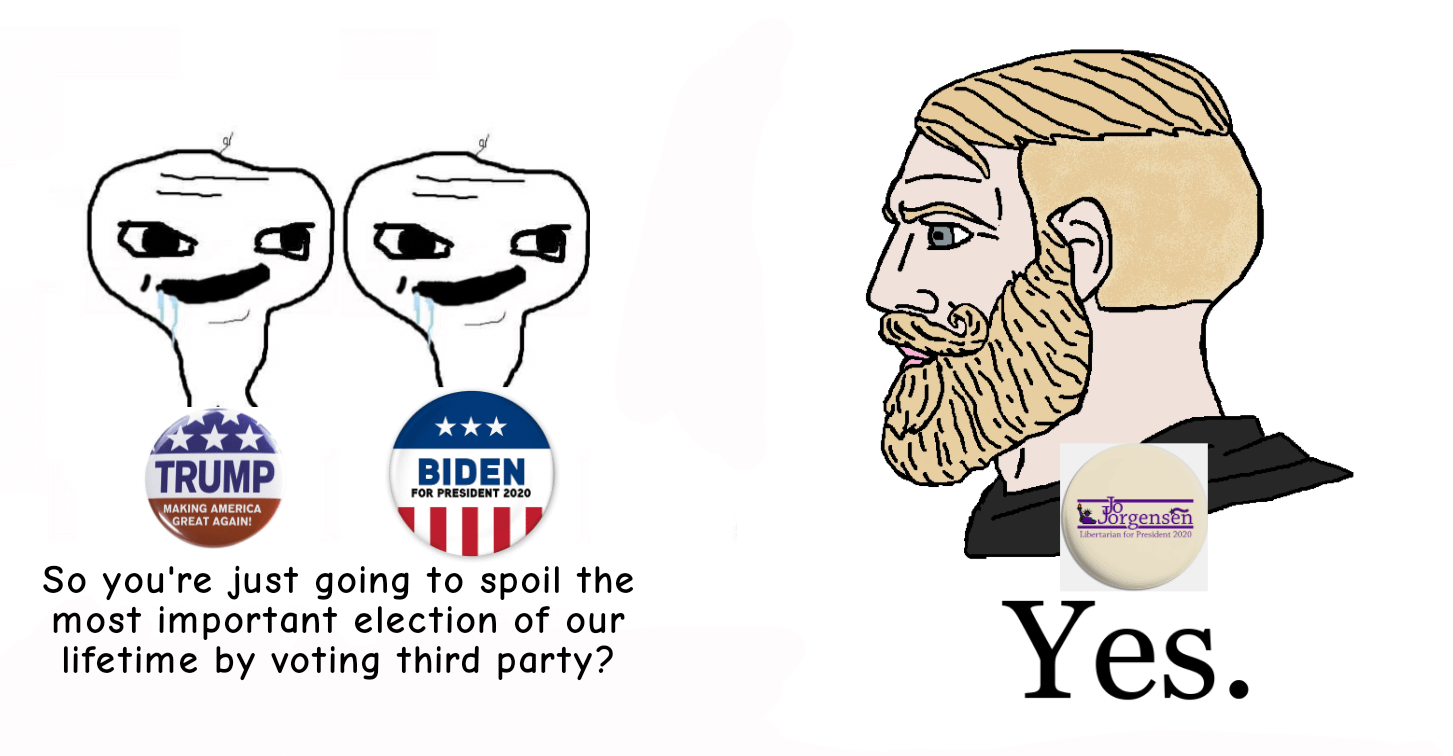 John Rubino at Dollar Collapse argues that the election this November is The LEAST Important Election Of Our Lifetimes because nothing important is going to change.

A consensus seems to have formed on both left and right that the upcoming presidential election involves some literally existential questions, making it THE MOST IMPORTANT ELECTION OF OUR LIFETIMES.

Let’s consider some of those supposedly existential threats:

A Politicized Supreme Court
As this is written, Senate hearings on the nomination of Trump’s third Supreme Court Justice are in progress. Democrat questioners seem to be mainly concerned that a conservative Court would eliminate Obamacare and Roe v Wade, consigning women and the poor to circa 1915 levels of degradation and neglect.

Leaving aside the question of whether Obamacare and Roe were Constitutional in the first place, let’s consider what would happen if they’re overturned.

Would the elimination of Roe v Wade mean that abortion becomes illegal from coast to coast? Not at all. States containing 70 or so percent of the US population would immediately legalize abortion within their borders while making provisions to ferry in pregnant women from neighboring non-choice states. The result: The issue moves back into the legislative realm where actual voters get to have a say and the procedure remains available for the vast majority of American women. Not ideal for folks on either side of the issue, but par for the course in a Democracy where citizens seldom get all that they want. And certainly not an existential threat.

With Obamacare, the issue is not the whole program, but just its “mandate” provision through which the government orders every American to buy health insurance and penalizes us if we don’t. Striking it down as beyond the scope of Federal power does not mean that Obamacare – or any other healthcare entitlement – goes away. It would continue as before but without the government ordering people to participate. A little bit harder to administer perhaps, but probably not the end of the program and, again, certainly not the end of the world.

In any event, 49% of Democrats want to replace Obamacare with a single-payer system like Medicare For All, and the demise of Obamacare might speed up that process, thus improving the world from a liberal perspective.

Meanwhile, conservatives fear that the Democrats, should they retake control of the White House and Senate, will “pack the Supreme Court” by decreeing that it should have, say, 15 judges instead of the current 9 and then adding 6 liberals, to turn the court into a permanently liberal branch of Congress.

So how big a threat is a politicized Supreme Court? Obviously not too big, since Justices have been “legislating from the bench” for decades (Roe dates from 1973) and activists on both right and left continue to complain that the other side is winning. Sounds like business as usual whoever is the next president.

World War III
This is just filler because the military/industrial complex is obviously in charge either way.  Under Trump, we’re liable to be fighting China or Iran by this time next year while under Biden, WWIII will probably feature Russia. The details differ but our kids are cannon fodder in both scenarios.

Rampant corruption
Let’s just agree that Trump, Biden, Harris, and Pence are each in their own way corrupt and/or unethical. But since two of them will end up running the country come November, from a corruption standpoint does it really matter which two?

The environment
This seems like a legitimate potential difference — until you notice a couple of things. First, Trump has talked about rolling back regulations to “save” coal and boost fracking, but he’s actually accomplished very little. Coal is still dead and fracking is moribund.

Second, solar power is eating the electricity business. Here’s a chart showing how solar installations are soaring even as Trump tries to save coal. As the cost of solar keeps falling, it will eventually dominate the energy economy, and there’s nothing Trump can do to stop it. And don’t forget cultured meat and vertical farms, which will, over the next couple of decades, do to factory agriculture what solar is doing to coal and natural gas.

Meanwhile, the Dems’ Green New Deal (which Biden in any event has disavowed) would, even in its most ambitious form, accomplish very little for the environment beyond what solar and other clean technologies will inevitably do via the free market.

The conclusion: Trump isn’t nearly the environmental threat he’s made out to be, and Biden isn’t that much of a savior. Technology and new business models are the big story here, and they don’t care who’s in charge.

Irresponsible borrowing
Each side accuses the other various kinds of financial impropriety. But the truth is that both are operating on an unspoken agreement to spend, borrow, and print whatever it takes to stave off a collapse brought about by past mismanagement.

The following chart shows the increase in US government debt over the past three administrations. Note that in the absence of labels you can’t tell by the amounts borrowed whether Democrats or Republicans were in charge in any given year.

The conclusion? If Trump wins he’ll continue to run trillion-dollar deficits. If Biden wins, he’ll borrow that much or more. Neither will scale back the military budget or soaring entitlements. And both will encourage, via zero and possibly negative interest rates, the private sector to continue its own borrowing binge. On fiscal policy, these guys are virtually indistinguishable.

Fascist dictator!
It’s amazing how many Democrats literally expect Trump to ignore the coming election and just declare himself dictator.

Please listen, liberals: Trump is trolling you. He’s a narcissistic stand-up comedian who finds himself with a vast audience of emotional children, and he’s doing what any self-respecting comic would do: He’s freaking you out. So pretend you’re at a stage-side Comedy Store table and just roll with it. When his set is over, he’ll drop his mike and amble off to his next gig.

Meanwhile, it’s equally amazing that conservatives look at Court stacking, the Green New Deal and other liberal power grabs as a prelude to an updated version of Orwell’s 1984. This is Joe Biden we’re talking about. He’s been a feckless political hack for longer than most voters have been alive and has never once displayed the ambition required to set up a dictatorship.

As President, he will take corporate donations and follow the orders implicit in those legal bribes. The result will be Clinton/Obama business as usual, not revolution.

Granted, Biden will likely die or lose what’s left of his mind before his first term ends. And yes, Kamala Harris is an instinctive authoritarian. But she has the same moral flexibility as the Bidens, Obamas and Clintons, which just implies a slightly nastier version of the status quo. Again, plenty of run-of-the-mill corruption and brutality, no coup in sight.

So the very real personality defects of this crop of candidates are an annoyance rather than a danger. And as such, they’re easily managed. Just don’t watch Fox or MSNBC and the coming political mess will wash over you like the smell from a passing garbage truck, unpleasant but ephemeral.

What DOES Matter?
The coming financial crisis of course. The pandemic turbocharged a process of hyper-financialization that was already underway, and now whoever is in charge next will have no choice but to keep bailing out everything in sight with tens of trillions of newly created dollars.

This will shift the pressure from bankrupt states and insolvent companies to the currency. Prices will start to rise as the dollar falls. And the fears of today’s voters will seem in retrospect like quaint fantasies from a simpler and embarrassingly naïve time.

And that’s when dictatorship becomes a real possibility. Not Because Trump or Biden are implementing long-held plans but because they are panicked by events spinning out of their control and have literally no idea what to do. This is a legitimately scary prospect. But the coming election will have nothing to do with it one way or the other. Buy gold now.