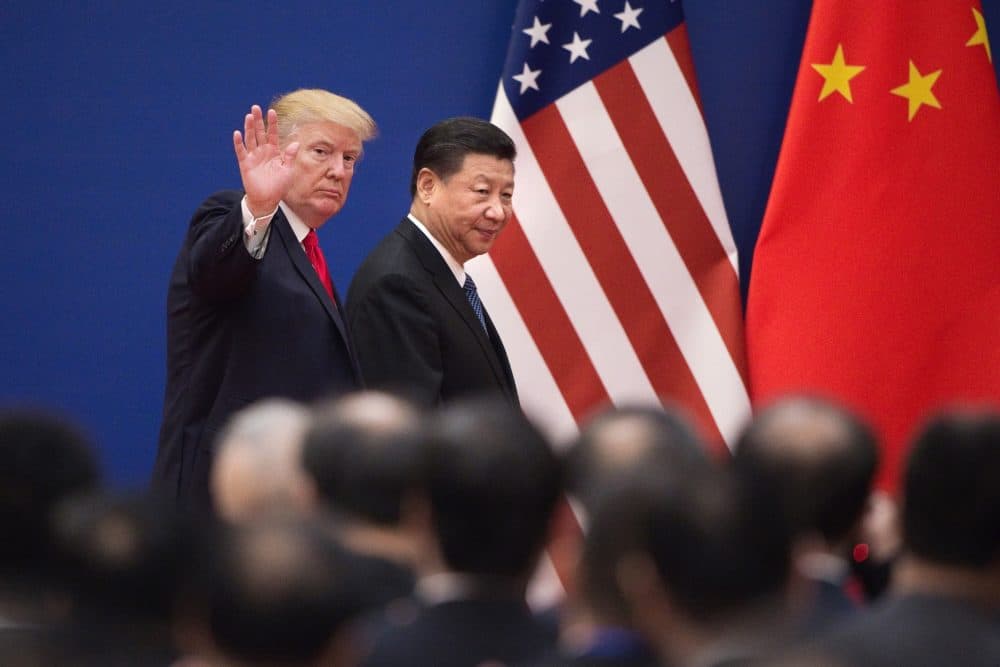 From the Mises Institute, On Foreign Policy, Trump Is Still the Lesser Evil

Covid-19 has occupied nearly all media attention, but foreign policy remains an important topic for many Americans who are exhausted by the prevailing order of never-ending wars. Lost in the usual cacophony of politics in the Trump era—which has been marked by outrage politics and a lack of introspection in discourse—are any in-depth discussions about making changes to America’s foreign policy quagmire. For some people who became disenchanted with the nation-building adventures of the Bush and Obama eras, the election of Donald Trump in 2016 presented a glint of hope.

Although he is no dyed-in-the-wool noninterventionist, Trump questioned a number of the shibboleths of the contemporary foreign world order that places America as the unquestioned savior of the world. Some members of the foreign policy blob (or the Blob) were so taken aback by Trump’s criticism of the North Atlantic Treaty Organization (NATO) during the campaign trail that some feared he would have the US completely leave the military alliance. If only!

History has repeatedly shown, however, that what is said on the campaign trail does not exactly translate into tangible results. Although Trump was able to get NATO member countries such as Germany to pull more of their weight by increasing military spending to comply with NATO standards, NATO remains intact and is still being used to counter the alleged Russian Bear. The fact remains that NATO is a dinosaur of the bygone Cold War era and serves no real national interests in the present.

Nonetheless, Trump’s conversation about having European countries spend more on defense is somewhat encouraging, inasmuch as it makes the idea of countries with an American military presence assuming their defense functions slightly more palpable. Ideally, this would occur outside the NATO framework, as countries start providing for their own defense while America scales back its military presence in said countries and focuses more on its domestic affairs. Alas, we don’t operate in such circumstances.

It is amusing how foreign policy elites’ feathers continue to be ruffled by an administration that hasn’t done much to scale back the military-industrial complex (despite a lot of negative talk directed toward it from the president himself) nor to reduce America’s global footprint abroad. Take, for example, former vice president Dick Cheney. The former member of the Bush brain trust expressed his dismay with President Donald Trump’s supposedly “transactional” foreign policy of weighing the costs and benefits of a number of alliances and partnerships the US has made with other countries over the years. Yes, a transactional foreign policy is not ideal, but it’s a marginal improvement over the missionary role America has taken during the last century. A transactional foreign policy actually takes into consideration that there are actual costs—human and financial—when projecting power abroad.

Many on the mainstream right correctly observe that there are no free lunches in matters of domestic economics. But when foreign policy comes up similar logic escapes them. With over eight hundred bases across the globe and a military budget larger than the next ten highest-spending militaries combined, the US is clearly putting too much of an emphasis on policing the world, when there are plenty of countries that are willing and capable of defending themselves if given the chance. Plus, the US has many domestic problems—from economic uncertainty to social tension—that it will need to sort out in the next few decades.

Most of the liberal and conservative establishment is trapped in outdated twentieth-century notions of foreign policy strategy and is not aware of notable geopolitical realignments taking place across the globe. US policymakers will have to live with the fact that the US cannot police every corner of the world. Additionally, should the US government get overzealous, there will be countries ready to resist American efforts to expand its influence and make potential interventions costly.

The talk about an “America First” foreign policy has been refreshing, but the U.S. has yet to commit to a coherent withdrawal policy. You either have the likes of Liz Cheney leading a bipartisan coalition in the US House to roadblock any withdrawal efforts, or even worse, when the administration announces some form of troop reduction, the generals remain quiet or say that the withdrawal must be “conditions based.” All these roadblocks make one wonder who really calls the shots on foreign policy. With how radically the US state has transformed over the last century, the straightforward policymaking guide that the Constitution originally laid out looks more and more like a dead letter. Unelected bureaucrats and foreign policy officials seem to be the ones actually running the show while presidents function as mere placeholders.

On a more positive note, the Trump administration has made some solid nominations for the positions of ambassador to Afghanistan and ambassador to Germany. William Ruger (the nominee for the Afghanistan ambassadorship) and Douglas Macgregor (the nominee for the German ambassadorship) are both critics of the US government’s perpetual war strategy and overreliance on a militarized foreign policy. As evidence of how dangerous their views are to the foreign policy establishment, both nominees have received stiff opposition from liberal interventionist to neoconservative circles—a solid sign that they’re good choices, but also an indicator that their nominations will likely be torpedoed.

If you think change will come about by getting rid of Trump, think again. Trump’s opposition is simply nothing to write home about. A Biden-Harris administration would do very little to the warfare state. We shouldn’t be fooled by any clever marketing that Trump’s rivals put forward. They’re not a saner, more level-headed alternative to the supposedly erratic Trump. As Ryan McMaken makes clear, the Democratic duo will continue operating within the same parameter of never-ending wars and not fundamentally reorient foreign policy toward restraint. Defense contractors can be confident that business will go on as usual. This is the tragedy of modern-day politics, which is dominated by a uniparty that broadly agrees on foreign policy questions.

Marginal changes in personnel and political leadership are always welcome, but they ignore a fundamental precondition for any meaningful change in policy—a shift in political ideas; namely, a rejection of the progressive liberal ethos of American foreign policy, which international relations scholar Kevin Doremus believes has the objective of “providing global security, global capitalism, democracy, and peace.”

The irony of this foreign policy outlook is that it ignores how liberalism came about in the first place. It was not brought about by putting GIs on the ground or through subversive forms of soft power, such as color revolutions, but rather emerged in the West through organic processes such as decentralization and jurisdictional competition. While certain countries can embrace Western institutions and reap great success, Doremus observed that the “combination of universal liberal values with the unmatched US military power leads to advocates ignoring the historical and cultural contexts of other countries” and make them believe that the US government can poke and prod countries into becoming facsimiles of America and other Western liberal democracies.

Like all forms of intervention, unintended consequences are bound to occur. They can come in the form of blowback or the development of balancing coalitions such as the emerging China-Iran-Russia axis, which has surfaced in response to perceived overreach by hegemonic states such as the US. The rise of illiberalism on the international stage is largely the product of a US government full of imperial hubris that doesn’t take into account cultural differences among polities and whose first instinct is to browbeat countries that don’t conform to its agenda.

The power of ideas cannot be overstated in the struggle to chart a new path for foreign policy. As Ludwig von Mises explained in Epistemological Problems of Economics, “No one can escape the influence of a prevailing ideology.” The same dynamic is in play with regard to foreign policy. Unless there’s a massive shift in consciousness in public opinion both domestically and abroad that recognizes how social engineering does not work, the ruling class will constantly be promoting regime change endeavors and other militaristic adventures with little to no pushback.