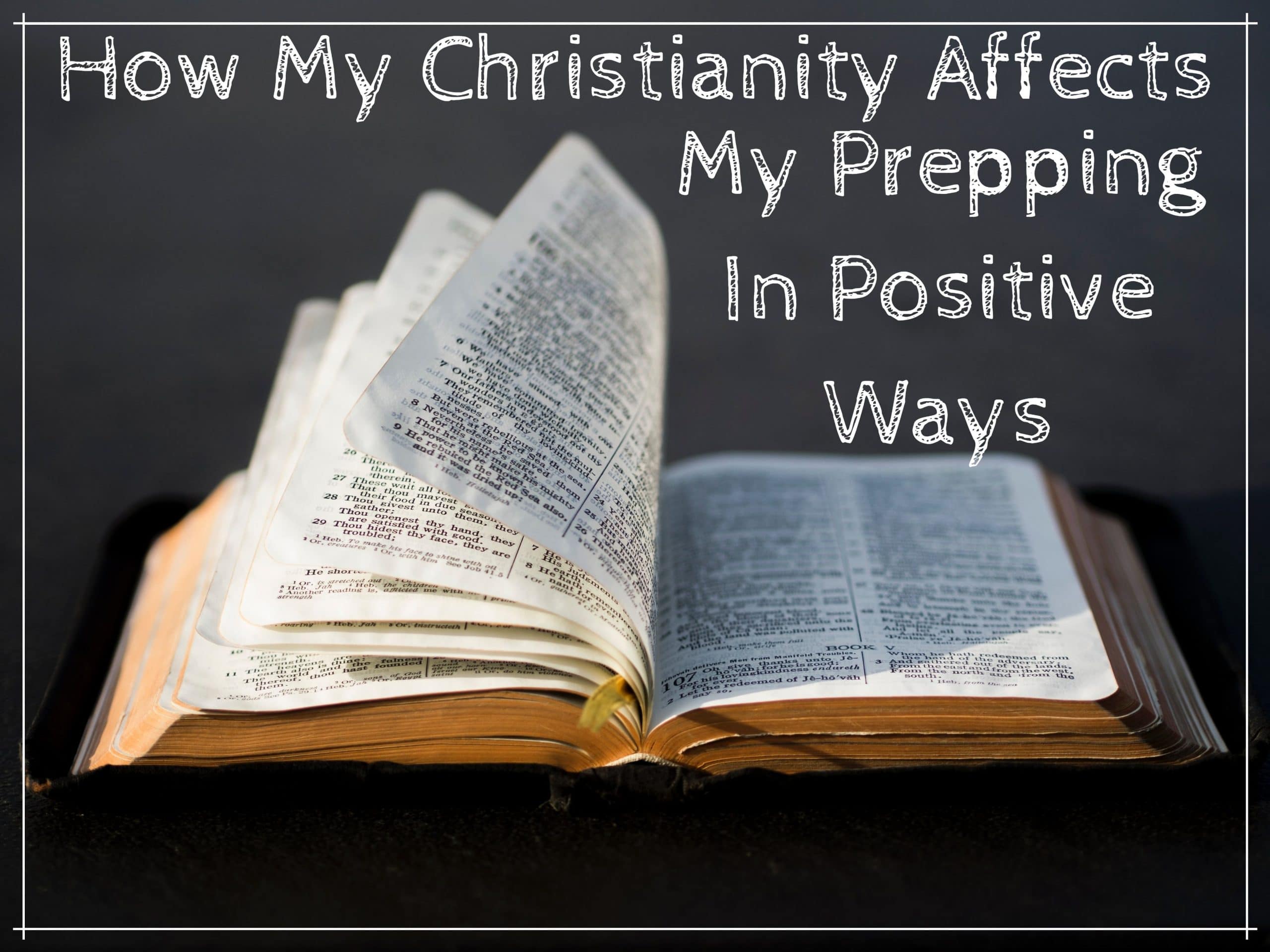 This morning’s article comes from A Year Without the Grocery Store – How My Christianity Affects My Prepping In Positive Ways.

I will be using Bible verses to prove my point.  If you will be offended, please just close this post now.  I really don’t want to offend anyone.

***There are links in this post.  Some of the links may be affiliate links. My promise to you is that I will only recommend the most economical version of the best quality of items to serve you. All of these are the items that I have bought for my own family.  If you click on a link, your price will remain the same.  If you make a purchase, we may make a small commission that aids in the cost of the running of this website.***

But first a funny.

Now, I am Presbyterian, and in general, we do have an optimistic view of future things sometimes known as Post-millennialism.

Do things look bleak here in America right now – Oh my goodness – YES!  However, did you know that there are almost 8 billion people on the planet?  Two billion of those claim the name of Christ.  And, did you realize that the Christian population in South America, Africa, and Asia rival that of North America and Europe?  And the number of Christians is growing in South America, Africa, and Asia, while the Christian population of North America and Europa is shrinking.  Just because when we look around and see what looks like everything around us crumbling down HERE, doesn’t mean that it is everywhere.

I believe that the Lord is still working and growing his kingdom.  Part of my preparedness should be to witness to those around me.  I want people to love God and worship Him out of a heart full of praise.  Why?  Because in doing so, their joy will be full.  And because their joy is full – mine will be more so.

How my Christianity affects my preparedness?

1.)  I believe that we’re given the example in scripture to be prepare

Where do I believe the Bible gives us the command to prepare? This example comes from Christ himself in Matthew 25:1-10.

Then the kingdom of heaven shall be likened to ten virgins who took their lamps and went out to meet the bridegroom.

Now five of them were wise, and five were foolish.

Those who were foolish took their lamps and took no oil with them,

but the wise took oil in their vessels with their lamps.

But while the bridegroom was delayed, they all slumbered and slept.

“And at midnight a cry was heard: ‘Behold, the bridegroom is coming; go out to meet him!’

Then all those virgins arose and trimmed their lamps.

And the foolish said to the wise, ‘Give us some of your oil, for our lamps are going out.’

But the wise answered, saying, ‘No, lest there should not be enough for us and you; but go rather to those who sell, and buy for yourselves.’

And while they went to buy, the bridegroom came, and those who were ready went in with him to the wedding; and the door was shut.

Five wise virgins prepared.  Five foolish ones didn’t.  The first five entered the kingdom.  The second five didn’t.  And, yes, I get that the picture of the kingdom really is discussing being ready for meeting our King.  But there’s also a secondary meaning.  Be prepared.

2.) Because of my Christianity, I believe that my preparedness will be effective.

Will it be perfect?  No, but I believe that it will be effective.  Like the oil for the widow of Zarephath in I Kings 17:7-15, I believe that my efforts will be multiplied.

But that doesn’t mean that I sit on my laurels.  I can go “A Year Without the Grocery Store.”  I also have worked on preparing our house.  Right now, we’re working on preparing our house for winter.  We’re stocked on wood and propane for the cold season as well. I’ve also worked on getting our vehicle in order to take care of us if something happens while we’re on the road or out and about.

So I haven’t been lax, but because I’ve worked at this, I do believe that that Lord will bless it.  Psalm 37:25 says, “I have been young, and now am old; Yet I have not seen the righteous forsaken, Nor his descendants begging bread.”

3.)  Because of my Christianity, I prepare because I have the responsibility of some taking care of others.

Acts 2:44-45 says, “ Now all who believed were together, and had all things in common, and sold their possessions and goods, and divided them among all, as anyone had need.”  This isn’t a verse that supports socialism.  These people sold what they had of their own accord and helped people of their own accord.

And if things go poorly, I had a responsibility to help take care of others.  I don’t just prepare for myself.  My husband and I are hoping to purchase acreage so that we can help others if things go poorly.   The hope is that we’ll have enough acreage to help people – starting with people in our family and then moving to people in our church.  Then we’ll see who else we would help.  I can’t speak to more than family and church yet.

4.)  Because of my Christianity, if things fall apart, I believe that if I survive, I have the responsibility to rebuild.

Those who survive should embrace the responsibility of rebuilding – even if it is incredibly hard.   And it’s something that we really need to start talking about now.  On what principles do we want to rebuild society?  What will be the basis for governmental structure and law?

There’s a lot to talk about and think about.  Do you have a preparedness group?  Discuss this with them.  Get their thoughts and input.

I would highly recommend this book – sometimes you’ll see it broken down into a three-book series.  It’s called God and Government by Gary Demar.  It’s a great read to understand how our government could be.  The American Vision website describes this book by saying, “Relying on clear historical and biblical research, author Gary DeMar demonstrated how America had been great and how she could be great again.”

So What About You?

Are you a Christian who is preparing?  What drives your preparedness efforts?  Where do you root them?  I’d love to hear. Share with us in the comments below so that we can all be better prepared.