NC Scout at Brushbeater spends some time talking about what is good in a boot that you can stalk well in versus a boot made for hiking/rucking with heavy gear in Stalking Boots.

Growing up, nearly everyone I knew hunted. Whether it was white tail, rabbits, dove, pheasant, and even hogs back when we had them in central NC. And in all those years, you had three general types of boots- Cowboy boots for dressing up, work boots in the field, and hunting boots in the Fall- and that was about it. It wasn’t until I went into the Army that I gave much thought at all to footwear or even knew the value of a good pair of boots, much less different boots for different tasks. Fort Benning fixed that.

Back when I was in High School I saw a movie called The Hunted with Tommy Lee Jones and Benicio Del Toro, about a ex-Special Forces or something-guy having some mental issues and looking for his old mentor from a SERE school, because…reasons. It hasn’t aged well, but, there was a few decent takeaways from it. Most notably was the fact that Jones’ character, LT, wore moccasins everywhere. It might have seemed like some hippy-back-to-the-land BS back then, but, its one of the few things about that movie actually rooted in reality. Light, soft soled shoes are critical for stalking in woodland environments. He used moccasins to effectively stalk, having little more than rawhide and a thin rubber bottom for basic tread.

Years later, when I was learning to do the same, one of the issues all of us ran into was using boots that either had too hard a sole or limited our ability to feel the terrain under our feet. Literally all of the qualities you don’t want when you’re carrying a heavy ruck on your back are the ones you do want when stalking. Thick soles designed for load bearing and stability also limit what you feel under your feet. This in turn leads to guys making errors in their stalking lanes- crunching deadfall sticks and limbs, rustling leaves and knowing what type of terrain you’re leaving too much spoor or trailsign in. Thin and light works well.

These days I’m doing a lot less heavy rucking and a lot more stalking work in the woods. The reality is that I’m likely not going to carry a 100lb ruck like I did back in Afghanistan for a lot of reasons, but it boils down to: a) my fighting kit selection is lighter now that what I had no option to use back then; b) a lot of my support gear, ie commo equipment, is far smaller & lighter now than before and c) I know a heck of a lot more now than I knew back then. Above all, my mission is entirely different today. A lot of what people are showing off as their “bugout bag” or third line patrolling kits is flat out unrealistic. But on the other hand, learning to effectively stalk in your operating environment will carry you a heck of a lot further down the tactical path then having a bag full of crap to leave for the guy who actually knew how to hide.

You’re a hunter of men, start thinking like one.

What makes an animal as larger as the Black Bear in eastern NC such an effective stalker? You’d think that due to its size it would make tons of noise, and yet it doesn’t. As any bear hunter familiar with eastern NC can tell you, its not just thick underbrush, but that a bear will be on top of you in no time if you’re not completely aware of your surroundings. Bear, like all effective predators, understand how to move in their terrain. They use their senses first before committing to make the movement, smelling and watching while moving slowly and deliberately. For a human, once we’re re-awakened our senses in the wild, the next step is to understand how to actually move.

Do not rush to be over-encumbered. If you’re carrying more gear than you can effectively remain quiet while moving with, then you’re carrying too much gear. This was the same philosophy of two of the best special reconnaissance units in modern history- the Selous Scouts and the South African Recces– with first hand accounts from both units frequently favoring blacked-out Converse Chuck Taylors in the field. While that made plenty of sense for the time, our options have gotten better today.

There’s a lot of good brands for lightweight boots out there- Solomon makes a good one, as does Rocky (what I wore in the winter months in Afghanistan) and even Nike with the SFB. A couple of solid options that have served me well in recent years have both come from Danner. I’ve become a big fan of their boots over the years because of their consistently high quality as well as their overall designs. One of the big selling points for me has been the lace-to-toe layout that allows me to control exactly how much tension the boot has on the sides of my feet; road marches, let them out because your feet are going to swell, for field work, tighten them up for greater dexterity in lateral movement. I’ve worn other brands over the years for field use that have been decent, but I keep coming back to Danner for a reason.

The first pair are a newer design they call the Reckoning- a lightweight boot that I’m assuming is their modern take on the jungle boot by its drain holes and breathable design. Its been a great boot so far in the two years I’ve worn them and is completely flexible from heel to toe. I’ve beat the living snot out of this pair and aside from a small tear in the outer nylon from getting hung up in some heavy briars, they’ve held up well. They’ve been on my feet for every Scout Course and most other classes I’ve run for the past couple of years and while they’re definitely military-looking boots, they’ve done everything I’ve asked them to do and more. 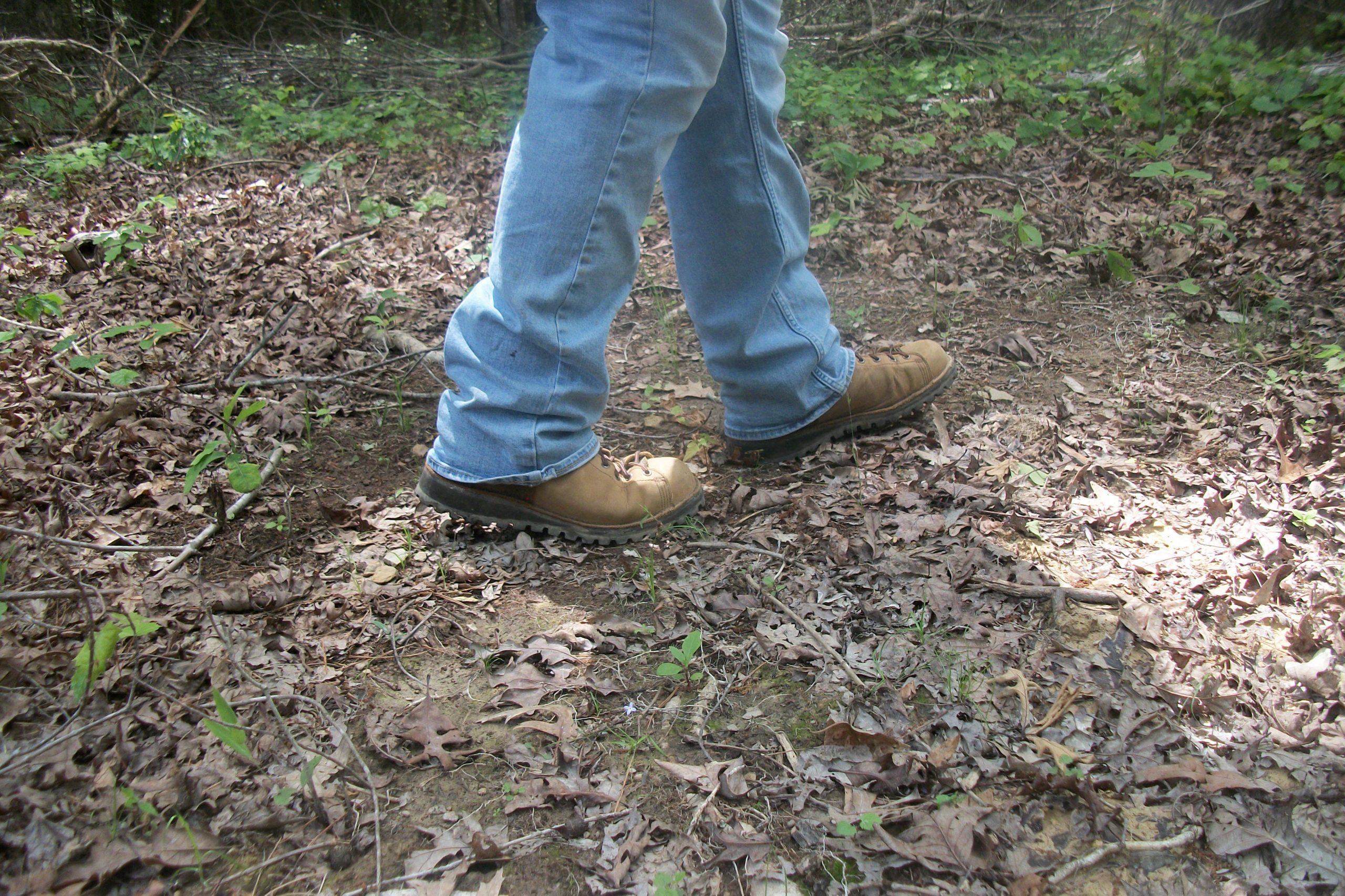 Stalking Footwork 101: Step with the outer edge of the foot, dropping the heel first then rolling the foot to the toe. As your first foot rises, do the same with the opposite foot. Get into a rhythm of walking like this in the woods- it’ll greatly mitigate your noise signature.

The second pair is in many ways a polar opposite- the traditional looking, excellent Elk Hunter. Mine are uninsulated and are definitely old school in appearance. But that said they work, and work well. The soft suede is very much like a moccasin and molded to my feet nearly immediately. The soles on the other hand took some time. While they were soft on the outsole like many hunting boots I’ve worn in the past to mitigate noise, they were definitely on the rigid side and took about 25-30 miles of walking before they had enough flex to effectively roll the feet while moving. Since then though, they’ve been great in the woods. These are some of the grippiest boots I’ve ever worn as well, which also takes some getting used to- wherever you place your foot, its staying there. But they’re quiet and feel a heck of a lot lighter on the feet than the listed 59oz in the specs. 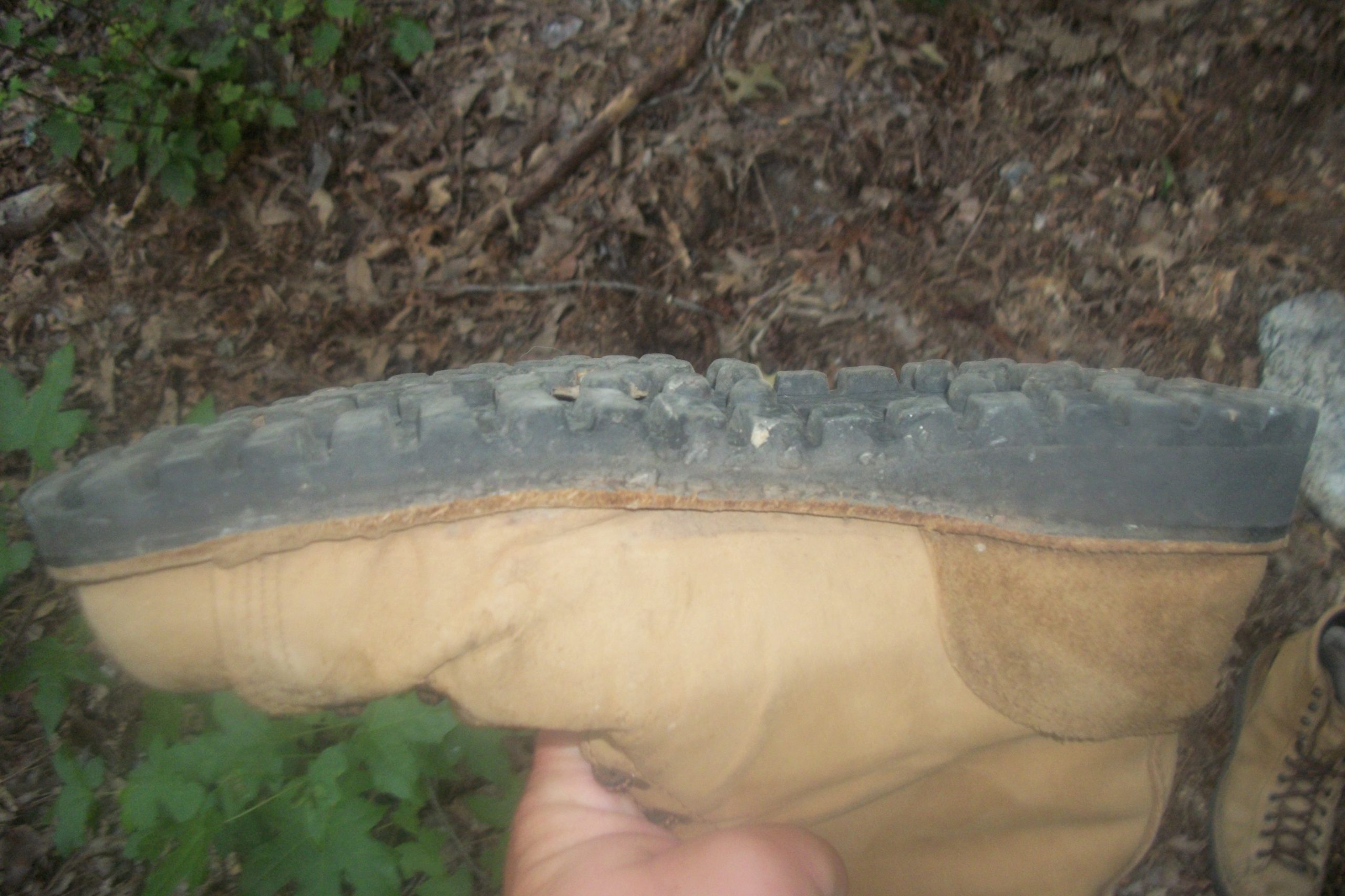 Both boots have two critical qualities in common- a lace-to-toe design and flexibility of the soles. The lace-down allows me to adjust the tension on different parts of my foot. Loosen them up for a longer movement (your feet will swell) or tighten them when you need more precision in stepping during a stalk. The second factor is the lack of a defined heel. No heel allows the foot to roll from your natural heel to the toe, greatly mitigating noise and making an overall better stalking technique.

They’re not quite as feral as wearing moccasins everywhere, but they’re comfortable, durable, and have served me well. As alumni from the Scout Course know, your proper selection of footwear are the tools that make or break your ability to successfully move undetected. Shooting is either a failure of bad tactics or the culmination of a really good one- remaining undetected and fighting on your terms will always win over an adversary dressed for door kicking in thick woodlands.