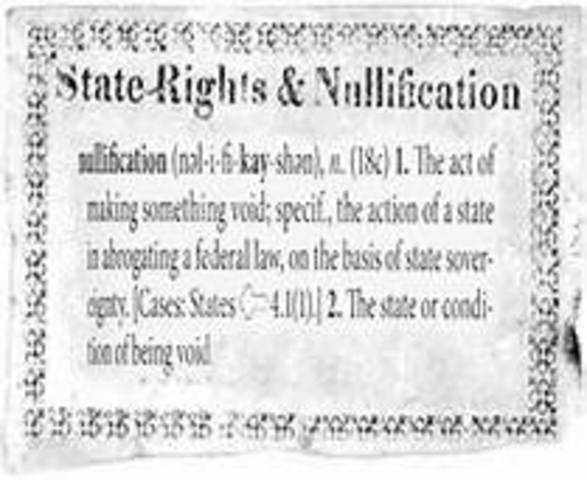 The Tenth Amendment Center’s practical nullification strategy relies on James Madison’s blueprint for taking on federal power. Madison advised that “a refusal to cooperate with officers of the union” would create impediments and obstructions to federal acts.

The Supreme Court’s long-standing anti-commandeering doctrine supports this nullification strategy. In a nutshell, this legal doctrine prohibits the federal government from “commandeering” state and local personnel or resources for federal purposes.

In effect, the federal government cannot force state or local governments to cooperate in the enforcement of federal laws or the implementation of federal programs. With the Supreme Court affirming this doctrine in five major cases dating back to 1842, the feds are legally powerless in the face of state noncooperation.

A lot of people want to apply this anti-commandeering strategy to state governments as well. The idea would be for a county or local government to simply refuse to enforce a state law. Activists have specifically pushed this strategy to block enforcement of state gun control laws. But local non-cooperation with state laws poses significant problems from a legal standpoint because the relationship between a city or county and a state is much different than the relationship between a state and the federal government.

“An entire consolidation of the States into one complete national sovereignty would imply an entire subordination of the parts; and whatever powers might remain in them, would be altogether dependent on the general will. But the plan of the convention aims only at a partial union or consolidation, the State governments would clearly retain all rights of sovereignty which they before had, and which were not, by that act, exclusively delegated to the United States.”

From a legal standpoint, no anti-commandeering doctrine exists for cities or counties. They cannot legally refuse to cooperate with state dictates. The state government can commandeer local personnel and resources for state purposes because cities and counties only exist as extensions of the state.

There are some exceptions to this rule. Some states, including Illinois, extend local governments “home rule” privileges, granting them some autonomy. But even in these states, the legislature can override home rule.

This makes local non-cooperation with a state government a very difficult strategy to carry out. It could prove successful if enough local entities ban together. But without the anti-commandeering legal doctrine to shield them, it’s much easier for a state to force local and county compliance. The states have legal cover when they refuse to cooperate with the federal government. Local governments enjoy no such legal shield against the state.

From a strategic standpoint, activists should be wary of trying to employ a strategy created for states to use against the feds as a tool for local governments to take on a state. It could be effective if enough local entities work together and create enough political pressure to dissuade the state from cracking down. But you need to be aware that local governments and their employees enjoy virtually no legal protection and the state has significant latitude in how it deals with an uncooperative local entity.