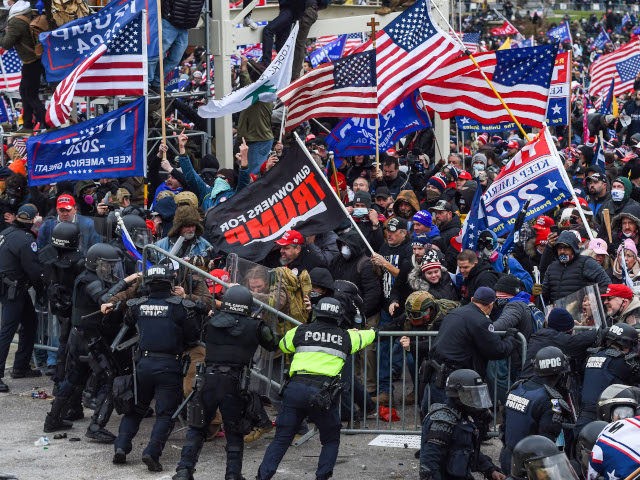 Breitbart provides live updates on the chaos in DC.

5:51 P.M. NBC reports that the woman shot earlier in the Capitol building has died.

BREAKING: Facebook has removed the president’s video from its platform, @jolingkent reports.

Pres. Trump began the video by reiterating the lie that the election “was stolen.” https://t.co/2Dq0RmNCff

5:43 P.M. CNN reports the Capitol building has been secured.

Sergeant at Arms has announced the U.S. Capitol building is now secure, according to press pool reporters
(via @kristin__wilson)

A flash lights up the front of the U.S. Capitol as a mob of Trump supporters control the steps of the building. pic.twitter.com/fulKu8FPzo

This is nuts. The Acting Secretary of Defense acknowledging that he and the Joint Chiefs Chairman did not discuss deploying the National Guard with President Trump – but rather with VP Pence and Congressional leaders. pic.twitter.com/b8gAT9bnSC