Aesop at Raconteur Report gives his opinion on DC shenanigans in Good Luck with that Plan.

Meme from Sal the Agorist 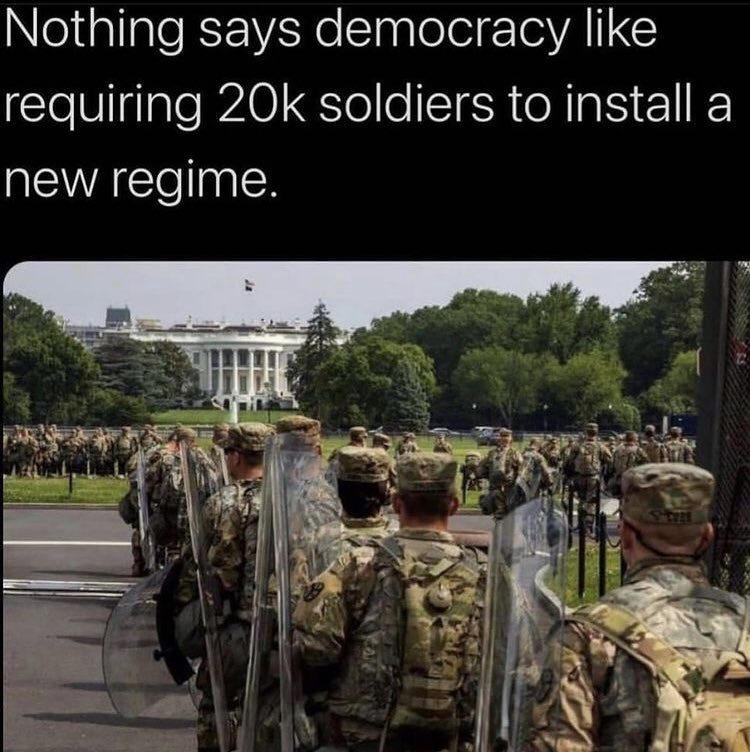 For reference, in Iraq and A-stan, Uncle’s guys only had a few tens of thousands of insurgents with which to contend. IIRC, the number that comes to recollection is around 50K or so. Britistan, from 1969-1999, was never confronted by more than a few thousand active Provos in the IRA, and it bled them and tied them up handily for three decades before everyone knocked off by mutual consent.

His Fraudulency is potentially facing millions.

Forget the happygas: I suspect the next few years are likely to be some of the worst times seen in these parts in 150 years and more.

BTW, proof that no insurrection was ever intended earlier this month: they have upwards of 30K troopies from the Notional Guard in DC, now.

We had 400,000 people on the National Mall on the 6th. That would have been 6 complete D-Day invasions-worth of American troops. Eisenhower didn’t have that many troops in France after the Normandy D-Day Invasion until July, a month later. If the MAGA crowd had actually wanted or intended to go all seize-the-government, (besides obviously not bringing a shit-ton more guns, nor any intent to hurt anyone) they could have conquered DC, Virginia, and Maryland, and held it indefinitely, with an army that size. (For reference, 400,000 people is approximately twice the size of the Marine Corps, anytime since the Vietnam War.) “Insurrection” my ass. That was a staged photo op co-opted by BLM/Antifa, for DNC propaganda gaslighting purposes, as we’ve seen non-stop every day since it happened. There aren’t enough cops east of the Appalachian Mountains to contend with a crowd that size were same intent on misbehaving, even if the po-po had been as inclined to murder as was one trigger-happy Barney Fife, determined to go all Tiananmanen Square on unarmed marchers, from safely behind a barricaded door.

If that crowd had been actually and truly hostile, those cops would have been found with their badges shoved up their asses, their severed jangly bits in their mouths, and their decapitated heads mounted as decorations on the spiked tips of the metal fence around the Capitol, and a few thousand marchers would have been wearing sweatshirts afterwards that said “Now I have a machinegun. Ho-Ho-Ho”

That crowd was no such vengeful mob, or the lists of dead PD the next day would have looked like the crawls on TVs after 9-11. These were clearly not the revolutionaries the gaslighting media and deranged Democommunist leadership keeps trying to invent.

“Revolt” my ass. That was a Sunday church picnic, kicking sand in the faces of a pack of shitweasels. No more, no less. To those thinking things will ever again be that peaceful this side of their appointments with a gibbet and noose, my only reply is

Meanwhile, the mainstream “conservative” broadcast punditry, and much of the online versions as well, seems content as a pig in sh*t to cuck-cuck-cluck about how they’re going to “Get ’em next time!” and “Vote Harder!” at them in 2022 and 2024, as if we didn’t just watch that ship sail right into an iceberg and kill everyone on board, twice, in the last two months. Everyone babbling bullshit about solving this at the ballot box is entirely delusional, and has suffered a psychotic break with reality. They should be locked up somewhere with soft food, soft music, and soft walls, until they die, or come to their senses, and I don’t particularly care which, at this point. They’re worse than worthless, and contribute nothing but active disinformation 24/7, which inarguable truths are the only reason why they’re still permitted to broadcast their tiddly twaddly codswallop on the public airwaves. That assessment is true for the entire goddamned LOT of them, BTW, lest there be any misunderstanding.

Yesterday, guy I was talking to about whether/when things go frisky noted “Nobody wants to be the one to go first.”

But the thing you need to remember, given the numbers of us versus the number of them, is that once it does kick off, no one will want to be left out before there’s no more minions and/or Democommunists to shoot.

Then remember that in any group, there’s an absolute minimum number of short bus window-lickers that can’t be controlled. Just like with Kung Flu, those Gilligans – from either side – are going to be what sparks the fuse on the powder keg on which we’re all sitting.

Okay. Tell me please, who fired that first shot on Lexington Common 245 years ago… I’ll wait over here while you’re working out that answer.

Oh, BTW, those 30K guys in D.C.? Mostly NG MP units (per Big Country Expat’s info). Who are, overwhelmingly, civilian LE types in their day jobs. So Team Fraudulent has essentially stripped the entire Eastern seaboard cities and counties near those units of a good number of their regular police officers.

That shouldn’t have any downside, should it…?

Me, I’m going shopping this weekend, at a couple of GI surplus haunts.

You never know what useful items you might find in nooks and crannies until you look.