Any preparedness-minded person who has spent time researching topics on the internet has most likely come across a bevy of people recommending various military manuals — from any one of several Survival manuals to medical handbooks and beyond. Here is Aesop from Raconteur Report with Milking Knowledge From the .Mil’s Cow 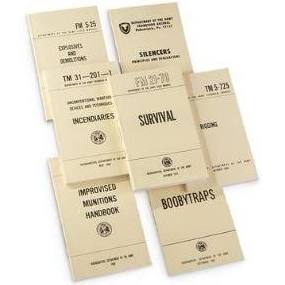 In response to “What? Which? Where? How” sorts of questions in response to Saturday’s post, a little guidance from the Information Desk is hereby dispensed.

Why Buy A Cow When Milk Is Free?

Other than the relatively few classified (which I can’t tell you about, unless I kill you afterwards…Oh yeah, right, smartypants. Like what? That’d be things like SERE/POW detailed training instructions on things like escape, resistance to interrogation, etc.; anything whatsoever to do with nuclear weapons and other WMDs, such as any specifications, types, deployment plans, allocation lists, compatible platforms/delivery systems, or even the list of units on the distribution list for same; cryptographic equipment, tank armor details, radar system specs, known weapon system weak points, and any number of other sensitive items and tidbits. Which, even if Ivan or Wang has a copy of already, is still not something we want falling into Pedro or Hadji’s grubby little fingers.) manuals, the vast majority are public information, and available from the US Government Printing Office (with a check and a request). However, their prices are rarely competitive, esp. when a plethora of sites distribute them as e-manuals for the unbeatable price of $0.

So, Rule 1: Get your field manuals for free. Period.

Anyone charging anything over bare materials cost and/or handling is ripping you off, and you’re the sucker. The exceptions are

a) anything you have found to be unobtanium (provided its classification status doesn’t make you a spy liable to prosecution for mere possession), or

b) anything you find that beats the cost of bandwidth plus printing yourself.

I.e., if someone’s selling a manual you want for $2, and printing it out yourself would cost you $5, plus the value of your monthly bandwidth prorated for how many megs/gigs you downloaded, then by all means, scoop it up.

I’ve been burned by reprints done in some Hong Kong whorehouse where all the meticulous 1960s-era line drawings were reproduced on a refurbed drug store copier with 20 years’ accumulation of puke and schmutz on the glass liner, and they look like blobs of indecipherable black ink. Those are fit only for fireplace kindling, or outhouse back-up reserve stock of paper products. Caveat emptor.

E.g.: I will bet you dollars to donuts that Ranger Training Manuals from before Big Green went all gender-diversity friendly asinine and stupid, and put booster steps in front of the log wall on the o-course, will be a bit more useful than will manuals produced more recently or in the near future, to be useable by all 57 genders in the upcoming Fabulous-Friendly Queer Eye For The Gender-Fluid Rainbow Rump Ranger: Pink Barbie Edition. Just saying.

For another example, I have multiple generations and iterations of FM 5-20, Field Fortifications. I can assure you that the post-nuclear-era Vietnam War version does not cover artillery-proof dugouts, trenches, and bunkers nearly as well as the pre-WWII version does, from before nukes, but after the experience of 4 years of trench warfare all across Europe. In VN, we did not dig shelters nearly as deep, nor bunkers as sturdy, as we had prior to 1945. Our enemy shelled the shit out our bases regularly, while employing tunnel systems to shelter, rest, hide, and regroup. So, how did those plans work out for the two sides, respectively?

This is why you might not want only the most recent edition(s) of any given manual, nor series of them.

Conversely, Rule 3: Latest and greatest can often be a great place to start.

How so? The copy of ST 31-91B Special Forces Medical Handbook most frequently found at gun shows, surplus shops, etc. is great – if you want a 60-year-old medically obsolete piece of shit that belongs in a museum. (At least, unless your only knowledge of wound care is rubbing dog poo on it and sacrificing a chicken.)  Or if you have a table with one leg an inch shorter than the others, and need to level the table. If you want to know the best way to render medical care now, the 2020-era Special Operations Forces Medical Handbook is what you want.

Sure, get both, but only if you download the dinosaur version for free, and only keep it as reference, in case you wonder about how they used to do something when JFK was the president, and neither Motrin nor CT scans had been invented yet.

If you like it, you should have put 3 rings on it, after you printed it out. If you haven’t printed it out, you don’t own it. You’re just holding a digital copy until you smash/erase/lose that copy.

You want to become an information warlord, for yourself, your tribe, or The Future?

1) Get either unlimited, or A Metric F**kton, of bandwidth.

3) Figure out how much space it takes, and then duplicate 10, 20, 50, 100, eleventy gajillion library copies on some thumb drives or DVDs, to give away to like-minded folks.

4) Print hard copies on archival paper, for your own library usage.

5) Get Adobe Acrobat, so you can create pdfs yourself.

6) Get a scanner, so that if you find an unobtanium manual that’s not a violation of national security to possess, you can scan it in its entirety, and pass it along for free to everyone else.

As big and dumb as the giant Green/Blue Weenie of Militardation is, there is a method to their madness, and you can learn it. You don’t know what you want, or should get, or should look for next? No problem.

Say you get a copy of Survival (anyone’s edition, any service, and numbering system – hint: there are now multiple numbering systems for military manuals. Because Pentagon.) Every military manual contains a listing of References. I.e., other manuals with more to say on the topic in general, or some specific aspect. Telling you that a compass is a great thing is a good point in Survival. But way better when you find out there’s a whole other manual on just Map Reading and Land Navigation. And another one on Desert Operations. And another on Cold Weather Operations. And another one on Jungle Operations. Each of which refer to Road Marches. And Field Hygiene And Sanitation. And to the M-16AWhateverversion rifle. Individual Tactics and Patrolling will point you to Fire Team and Squad Tactics, The Rifle Platoon, the Rifle Company, and Battalion Operations. Now you’ve gone from running one person (you) to running 500 people.

Like a YouTube or other internet wormhole, you can follow an idea or topic to the farthest related reaches of the known universe, through any manual’s References.

Where do I find all this stuff?

About 100 places on the internet, with a couple of mouseclicks.

Like going to a great old used book store, where the price on everything in the store is $0.

The little communist Anti-American bastards put the manuals online, to embarrass the military.

There are dozens more, but those will keep you busy for quite a good while.

Nota bene for these and any other sites: scan your downloads, beware of malware, and if anything trips your virus scanner, blow it up without opening, just like EOD does.

I’m not responsible if you bring Trojan horse VD into your hard drive, so apply due diligence.

But with a modicum of cyber-savvy and caution, you can amass a library of invaluable information on an enormous range of topics, for nothing, or close to it.

I’ve just given you the keys to the nuclear plant.

Make good use of what you find, and loot until you can’t do it anymore, or you’ve got it all.

Then, be a dandelion: reproduce what you’ve got, and scatter it in all directions.