In this post at Off Grid Ham, Chris Warren talks about some power failures in Texas related to wind power. Whatever your power source, it’s good to have backups. As we’ve posted recently, the WA state legislature is entertaining the notion to ban fossil fuel heating, water heating, and possibly other appliances in all new home construction. But once you’ve put all your heating into the electricity basket, what happens when you have power outages like the ones going on in Texas currently, or California’s rolling blackouts, or any other extended winter blackout? You get cold, really cold, perhaps dangerously cold, maybe dead cold. Where I live currently, our heat is primarily electric. That said, we can also heat with a propane fireplace insert. We can cook on our propane stove. Both of those can be and have been used when there is no power.

When our family lived in Seattle, we once endured eleven days without power during a severe ice storm. Because our apartment building was on a relatively isolated spur of the electric system, we were low on the priority list for power restoration. We had a regular/wood fireplace, though, and a propane grill on the balcony, so we were able to keep warm and eat hot food. The balcony also served as refrigerator/freezer. So, having backups is not just for apocalypse preppers. Think about what you would do in an extended, wide-area power outage, in the worst conditions, and make some preparations ahead of time, so you’re not thinking “I wish I had just…” as you freeze to death or suffer heat stroke, depending on your environment.

Now, Texas has failures on multiple levels. Many homes aren’t insulated for the type of cold they are getting. Some natural gas pipelines broke, and the homes were only setup for heating with gas. Some have generators, but can’t get gas to refuel their generators. But that’s all the more reason to think about what you have and how you can supplement it.

It’s not a comedy if you’re living through it.

Bad news out of Texas gives us an opportunity  to look at what can happen when energy policy and weather conspire to pull the grid down. If you live in the upper Midwest USA like me, or New England, or for that matter anywhere north of St. Louis, you might think the winter weather hitting the Southern USA, particularly Texas, is somewhat amusing. Look at them losing their minds over three inches of snow! Where I’m from, we barely notice anything less than five inches. 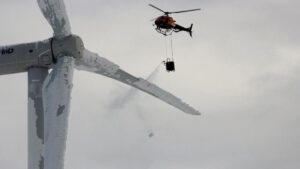 But there’s nothing amusing about millions of people being left with no power, no heat, no water, business closings, accidents, property damage, injuries and lost lives due to unusual weather (for them) that the region is not prepared to deal with. Yes, I’ve seen the internet jokes and memes, including the one with the helicopter de-icing a wind turbine (which, by the way, is confirmed fake news). Beyond the shallow humor, there is real damage being done.

The stage was set for a mess.

The disaster started when the the weather in Texas turned uncharacteristically cold and snowy. The increased demand for electrical power and stress on the grid from the storm created perfect conditions for grid failure. This failure cascaded to water and gas infrastructure when those facilities lost power. Some politically-biased news sources and personalities are laying the blame on frozen wind turbines, but it’s not that straightforward.

Wind turbines account for 25 million megawatts of power output in Texas. About 12 million megawatts went dark. Everything considered, wind turbine failure accounted for 13% of the lost energy. This is not insignificant, but by itself should not have caused millions of people to lose their juice. The other 87% of the outage was from conventionally-powered plants, mostly gas, going offline. It does not take an energy expert to figure this out. When a large part of the traditional grid is disabled, and then roughly half the wind capacity goes too, there is a huge problem.

The self appointed “experts” are squawking about the failure of wind turbines as if they were the only reason the Texas grid went down. It’s not even a half truth; more like a 13% truth. That’s why I have a problem with their hypothesis. The Electric Reliability Council of Texas (ERCOT), the state agency responsible for making sure this kind of stuff does not happen, has a lot of explaining to do. Right now Texas has only about half of the power capacity it usually needs, and it can’t all be blamed on the wind.

You are the star. And the supporting role.

What happened in Texas is a cautionary tale for every reader of this blog. The best and most expensive systems can fail. If you use solar, the same concept applies. After all, the sun is not reliable all the time. In my locale, we’ve had maybe three or four days of full sun in the last month and I’ve had to plan accordingly.

What are you doing to prevent your own personal version of Texas from happening? Don’t feel embarrassed if you’re not comfortable with the answer to this question. Many if not most off grid amateurs have enough alternative power to run their radio gear and not much else. No one can realistically prepare for every foreseeable disaster, but we can probably do better than we’re doing now. Off grid ham radio is just a small part of being ready. The good news is that you’re probably more prepared, and certainly more aware, than the average person.

If you’re warm and comfortable and the lights are on, take some time to evaluate your situation and identify areas to improve. Off grid radio for survival/preparedness reasons cannot be done in a vacuum. After all, what good is it to have the most awesome & capable off grid radio station ever when the pantry is bare and the house is cold? There is a tendency for people to go all in on one aspect of preparedness, be it radio, guns, stockpiling food, etc., and blow off all the other things one must do to be truly ready. If this sounds like you, break the curse of tunnel vision.

You cannot stop a Texas-style SHTF situation from happening to you. And you cannot change bad energy policy or poor infrastructure. So focus on what you can control and write your own ending, to the extent that you can. Those who are apathetic are auditioning to play the tragic character in a very non-fictional drama.