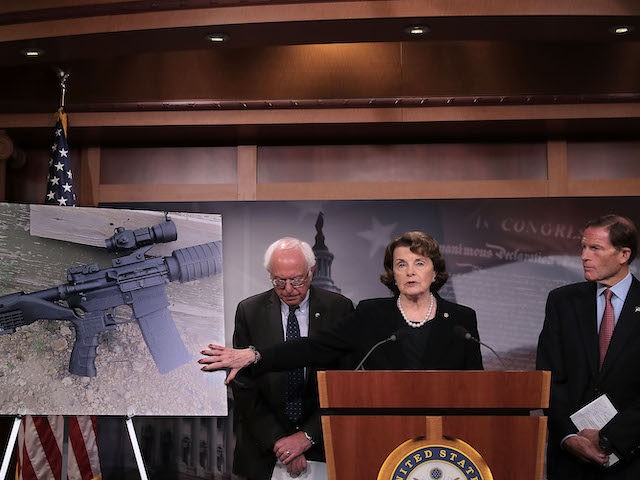 From Breitbart, Dianne Feinstein Introduces Ban on 205 Different ‘Assault Weapons’. It doesn’t look like a bill number has been assigned, yet.

The legislation, called the “Assault Weapons Ban of 2021,” is co-sponsored by 34 Senate Democrats. It would also ban ammunition magazines holding more than ten rounds.

Feinstein’s ban would allow current owners of “assault weapons” to retain possession of them, but if the gun is transferred, a person must undergo an FBI background check before receiving the firearm.

Her “Assault Weapons Ban” also bans bump stocks, which have been illegal since March 26, 2019.

It’s been 17 years since the original Assault Weapons Ban expired, and the plague of gun violence continues to grow in this country. To be clear, this bill saves lives. When it was in place from 1994-2004, gun massacres declined by 37 percent compared with the decade before. After the ban expired, the number of massacres rose by 183 percent.

In contrast, the Department of Justice’s National Institute of Justice (NIJ) issued a report indicating the 1994 “assault weapons” ban did not reduce crime.

The Washington Times quoted University of Pennsylvania professor Christopher Koper, author of the NIJ report, saying, “We cannot clearly credit the ban with any of the nation’s recent drop in gun violence. And, indeed, there has been no discernible reduction in the lethality and injuriousness of gun violence.”

The NIJ report continued, “The ban’s effects on gun violence are likely to be small at best and perhaps too small for reliable measurement.”

One thought on “Breitbart: Feinstein Introduces Assault Weapons Ban of 2021”