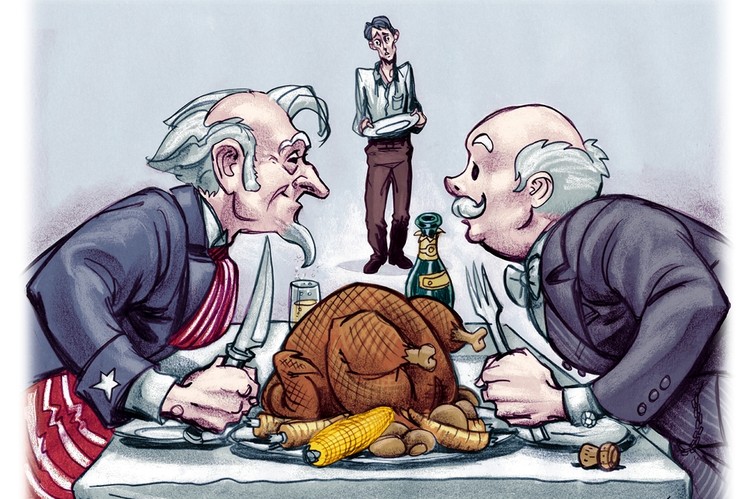 In this article from Mises Wire, Murray Rothbard discusses the Meat Inspection Act of 1906, heralded at the time as a successful regulation of the large meat packets for the health of the people. In fact, Rothbard argues, the regulation was at the behest of those large meat packers to stifle competition. This behavior by wealthy corporations to use regulations to kill off competitors continues to this day and is the main source of both conservatives’ dissatisfaction with Congressional corruption and progressives’ anger over corporations running the government.

In fact, both conservatives and progressives are correct. The US Congress operates on corruption largely funded by wealthy corporations influencing laws to their own benefit. Conservatives get angry that their representatives aren’t doing what is right. Progressives get upset that the corporations are not more heavily regulated. Members of Congress are not motivated by finding solutions to problems. Finding solutions is not lucrative. Continued battle over emotional issues and doing favors for wealthy corporate donors on the other hand makes millions.

Gun control does not solve violence problems. Fighting over it makes millions. Neither Democrats nor Republics have passed much legislation in the past two decades in regards to firearms, but they’ve talked about it, threatened it, introduced some token legislation and made millions as citizens fought over it.

Fighting over issues like the national debt and healthcare are not meant to solve problems, but to provoke donations and monetary influence.

Most of the anger on “both” sides (as if there were only two) of the political aisle finds it root in out of control government though often the sides don’t realize it.  The BLM movement. Bundy ranch and Malheur standoffs. Occupy Wall Street. The Tea Party. And so on, are all at base problems that come from unaccountable, out of control government.

Excerpt from The Meat-Packing Myth

…This rigid inspection law satisfied European medicine, and European countries swiftly removed their prohibition on American pork. But the European meat packers were upset in proportion as their physicians were satisfied. Quickly, the European packers began discovering ever higher “standards” of health — at least as applied to imported meat — and European governments responded by reimposing import restrictions. The American meat industry felt it had no other choice but escalating its own compulsory inspection — as the minuet of ever higher and hypocritical standards continued. The Department of Agriculture inspected more and more meat and maintained dozens of inspection stations. In 1895, the department was able to get Congress to strengthen meat inspection enforcement. By 1904, the Bureau of Animal Industry was inspecting 73% of the entire U.S. beef kill.3

The big problem for the large packers was their smaller competitors, who were able to avoid government inspection. This meant that their smaller rivals were outside the attempted cartelization and benefited by the advantage of being able to ship uninspected meat. To succeed, the cartel had to be extended to, and imposed upon, the small packers.

…The large meat packers were enthusiastically in favor of the bill, designed as it was to bring the small packers under federal inspection. The American Meat Producers’ Association endorsed the bill. At the hearings of the House Committee of Agriculture on the Beveridge bill, Thomas E. Wilson, representing the large Chicago packers, put their support succinctly:

We are now and have always been in favor of the extension of the inspection, also to the adoption of the sanitary regulations that will insure the very best possible conditions. … We have always felt that Government inspection, under proper regulations, was an advantage to the live stock and agricultural interests and to the consumer …5

One advantage to imposing uniform sanitary conditions on all meatpackers is that the burden of the increased costs would fall more heavily on the smaller than on the bigger plants, thereby crippling the smaller competitors even further.

One thought on “Mises Wire: The Meat-Packing Myth”