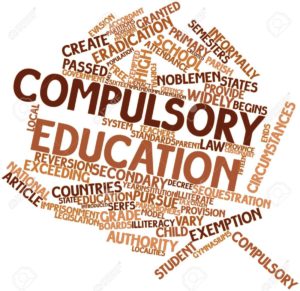 An educated citizenry is required for the preservation of our liberty and our republic. This has been well known since the founding of our nation. But is compulsory education the answer? This article at the Future of Freedom Foundation says no. Compulsory Education – The Bane of Learning and Freedom

Approximately 50-million students, bound by state compulsory attendance laws, are trapped in what is essentially a prison of their bodies and minds.

Most Americans never question school compulsory attendance laws itself but instead focus on what occurs inside the classroom. Public schools, which can also be called government schools, are notorious for a wide array of problems. From class size to the controversy over testing to disruptive student behavior, the demand that more taxpayer money be used to correct the poor performance is touted as the answer. This completely disregards two points: 1. The benefit-cost ratio of government education of children is often a losing deal. (Private schools are frequently smaller, religious affiliated, and in many cases cost less to educate each student than the public counterparts.) 2. More important, compulsory education violates the liberty of all citizens – taxpayers and students alike, not only by forcing parents to subject their children to a state education but also with the coercive funding (i.e., taxation) used to force children’s attendance.

From its earliest days, our nation functioned well without compulsory education laws, and the minimal involvement of government enabled youth to choose trade/vocational training, religious study, or higher education relevant to the individual’s personal choice. As the idea of compulsory attendance began to develop in society, it became increasingly repressive, decade by decade. Parochial schools and family home-schooling were replaced by laws forcing attendance for most students at government schools.

Government-run schools and compulsory attendance to any school are the antitheses of freedom, liberty, and learning. Forced to attend a school, most will go to government schools. Students are treated as prisoners sentenced to serve 12 years (or less in some states). Years of children’s precious lives and vulnerable minds are spent in forced confinement, often subjected to aimless busywork to meet the demands of teachers. The individual is not valued in many government schools, as all focus is on becoming an upstanding member of the collective. Leftist indoctrination has become ubiquitous. Independent thinking is discouraged while group-think pervades nearly every aspect of the politicized curriculum. All of this in the name of bettering children’s lives.

The oppression is accepted by the majority who learn quickly how to gain approval from their masters, with students who rebel sadly turning to personally and socially destructive behaviors. While many passively accept this oppression, the individuals who would be better suited to pursue unique aptitudes suffer.

With rare religious exceptions recognized, the vast majority of American youth must obey by attending such schools or face various penalties and punishments, as well as sometimes the possibility of fines and jail time for parents. Gone are the days where educational choices were up to the young person and his family.

The result of youth being exposed to years of socialist ideas explains the rampant decline of basic knowledge and generation upon generation of graduating seniors with minimal ability to do much of anything aside from obeying orders. All too many high-school graduates display poor writing skills and an inadequate ability to engage in critical thinking on simple matters.

The collective is placed above the individual. From rewards for just showing up to ribbons for all, disallowing students to give one another a card or a simple gift unless all are given one, to situational ethics role-playing scenarios, students are continuously subjected to an agenda that discourages independent thought. High achievement is discouraged as competition is rejected while poor performers are made to feel equal to all. Critical thinking and actual substantive course work are replaced by leftist revisionism of history, identity politics, and advocacy of politically correct perceptions of life.

Free speech, a fundamental of our nation, is not only not valued, but it is also suppressed. Subtle and patent discrimination of those not conforming to the frequently liberal agenda pervades government education. After years of this beginning when very young, the mental and emotional development is stunted, and the socialist mindset is placed — exactly what an all-powerful government wants — an easily controlled and manipulated unquestioning populous.

Click here to read the entire article at FFF.org