Michael Krieger of Liberty Blitzkrieg has posted an article government not letting a good crisis go to waste, the failure of mass movements to take hold for change, and asking What Are You Gonna Do About It?

Tucked into the recent recovery bill was a provision granting the Federal Reserve the right to set up a $450 billion bailout plan without following key provisions of the federal open meetings law, including announcing its meetings or keeping most records about them, according to a POLITICO review of the legislation.

The provision further calls into question the transparency and oversight for the biggest bailout law ever passed by Congress. President Donald Trump has indicated he does not plan to comply with another part of the new law intended to boost Congress’ oversight powers of the bailout funds. And earlier this week, Trump dismissed the government official chosen as the chief watchdog for the stimulus package.

The changes at the central bank – which appear to have been inserted into the 880-page bill by sympathetic senators during the scramble to get it approved — would address a complaint that the Fed faced during the 2008 financial crisis, when board members couldn’t easily hold group conversations to address the fast-moving economic turmoil.

The provision dispenses with a longstanding accountability rule that the board has to give at least one day’s notice before holding a meeting. Experts say the change could lead to key information about the $450 billion bailout fund, such as which firms might benefit from the program, remaining inaccessible long after the bailout is over.

The new law would absolve the board of the requirement to keep minutes to closed-door meetings as it deliberates on how to set up the $450 billion loan program. That would severely limit the amount of information potentially available to the public on what influenced the board’s decision-making. The board would only have to keep a record of its votes, though they wouldn’t have to be made public during the coronavirus crisis.

A Fed spokesperson did not comment on the changes in the law or whether the Fed would continue keeping records of its meetings.

– Politico: Recovery Law Allows Fed to Rope off Public as It Spends Billions

An era can be said to end when its basic illusions are exhausted.

Before going any further, I want to share a graphic that accurately summarizes my position on the current pandemic affecting the world. 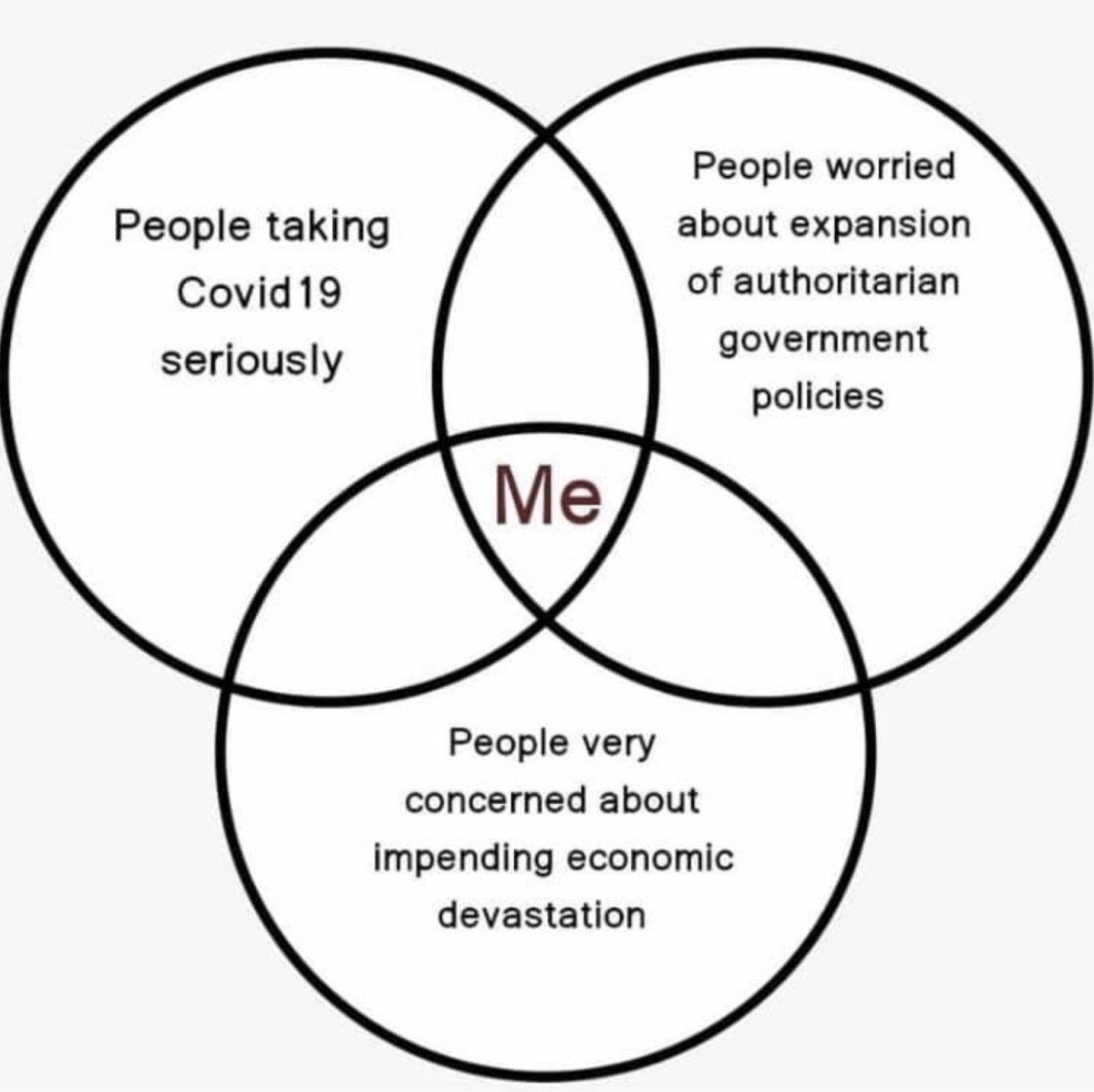 Unfortunately, it’s quite common for many to latch on to one of these conclusions and singularly obsess about it to the detriment of the others, when we need to be thinking about all three simultaneously.

It’s absolutely critical we understand governments throughout the world are rapidly mobilizing to use the crisis as an excuse to extract more wealth from society and condition the public to relinquish more precious civil liberties. The response in my own imperial oligarchy masquerading as a country has been particularly grotesque. A government that told us masks don’t work and couldn’t roll out testing for weeks, is now responding with the worst of both post-9/11 and post-financial crisis responses. The idea of representative government or democracy in America is a complete myth. The interests and desires of the people are irrelevant, and our economic system can be best described as financial feudalism.

We’ve seen this movie before. The U.S. government and Federal Reserve used major crises to consolidate wealth and power twice before this century, and it’s happening again. They got away with it before — and they’re getting away with it now — because the public accepts it. I hate to write that, but it’s true. People will tell me the public has no way to fight back, but that’s not accurate. The public hasn’t even tried historical methods like mass strikes and boycotts, instead they’ve been successfully neutered by phony red/blue team mainstream politics, through bickering about marginal issues like pronouns and bathrooms, and by endless entertainment and debt-based consumption. This is why the oligarchy keeps winning. Americans aren’t a serious people yet.

Witnessing the massive theft and power consolidation during the financial crisis a decade ago shook me to my core. I learned so much about how the world really works I simply couldn’t go on in the same way, so I quit my finance job and moved out of NYC. I was convinced such in your face theft would lead to effective popular movements and that the people would discover their power and take direct action, but I was wrong. Rather than economic populism transcending other differences to become ascendant and potent, most Americans were successfully shoved back into convenient political boxes easily managed by oligarchy. The rest is history…(continues)