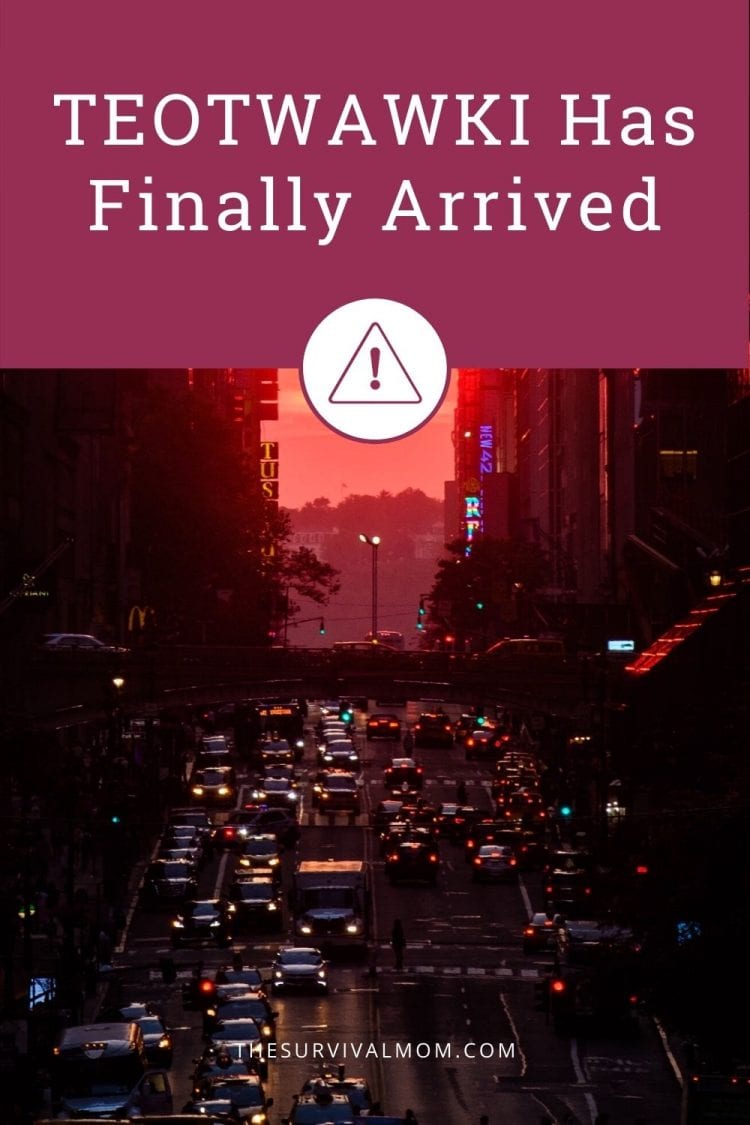 The Survival Mom talks about some societal and cultural changes resulting from the pandemic in TEOTWAWKI has finally arrived.

This past spring while America was busy shopping for toilet paper and hand sanitizer, and panicking at their shortages, TEOTWAWKI happened.

The End Of The World As We Know It arrived. It slipped right past us while we were all distracted, but make no mistake. We are unlikely as a country and a world to ever go back to “normal”. We aren’t going to turn a corner at some point and magically, it will be as though the pandemic never happened.

Who knew, back in January and February of 2020, that the coronavirus pandemic would be the TEOTWAWKI event that changed our world?

There has been an upheaval in virtually every aspect of our lives. New divisions now exist between people that didn’t exist in the “before time”. Authorities, both elected and unelected, have expanded their powers. Data has been skewed, misrepresented, and at times, falsified in order to maintain an official narrative, and in the meantime, a near-panic-level fear has drilled its way deep into the hearts and minds of millions.

We went from “slow the spread,” “wash your hands for at least 20 seconds,” to now, altering everything about our lifestyles as we wait for a vaccine, which may or may not ever come.

However, it turns out that this TEOTWAWKI event isn’t wholly negative and full of doom as many of us once believed.

Some commentators, James Altucher for one, have called the virus, “The great reset”, meaning that society has a chance to re-imagine and re-create something better than what existed before. Mike Cernovich described it as an “accelerator” – The pandemic has accelerated events that would have eventually happened but are now occurring within weeks rather than months or years.

Our public school system, medical treatment and consultation, family relationships, and businesses are just a few things that are being reset and accelerated.

Public education will never be the same. As we speak, thousands, maybe millions of parents across the country are taking control of their children’s education and are seeking to hire teachers and tutors directly.

Nebraska’s homeschool filings are up 21% from the same time last year, and in social media, parents are clamoring to find other like-minded families to create “homeschooling pods”. Here’s a quote from a now-viral Facebook post:

“If you are not a parent/in a mom’s group, you may not be aware that a kind of historic thing is going on right now.

She adds, “This is maybe the fastest and most intense PURELY GRASSROOTS economic hard pivot I’ve seen.”

Parents are learning about micro-schools and diving into homeschooling, even as teacher unions are making demands that might have made sense back in January but are now completely untethered to this new reality. A reality where millions of students and parents discovered the variety of options available and are continuing down that alternative path.

TEOTWAWKI and the family — surprising results

Another positive result has been during the quarantine weeks, families discovered they quite like being at home together. A friend of mine living in Brooklyn was astonished by how well his family, including two teenagers, are getting along in their apartment, with only a nearby park available for outings and fresh air.

I read this quote from a mom who said, “It’s going to be very difficult to get back to normal because for the last eight weeks we’ve been having dinner together as a family, every single night. And for the previous 10 years, we never did that.”

Many families are facing dramatic financial hardships. I don’t want to minimize that, but at the same time, spending more time together and not less has resulted in, for many, strengthened family ties…(continues)

Click here to read the entire article at The Survival Mom.