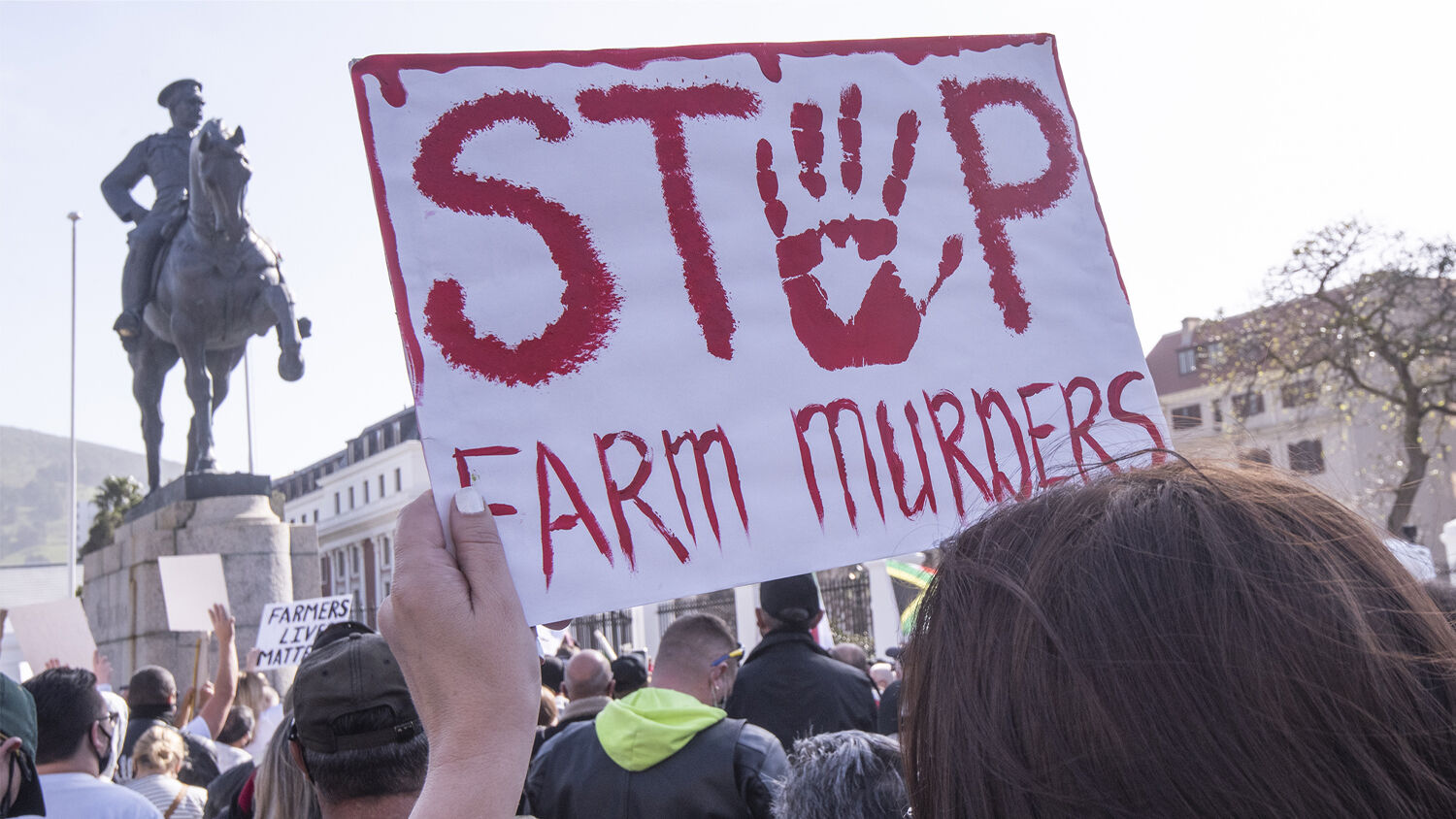 From The Trumpet, Farm Attacks Surge in South Africa:

The bodies of Daniel and Hybrecht Brant were found six miles away from the body of their murdered daughter, Elizabeth. All three were kidnapped and murdered on July 26, when a gang broke into their farmstead in the Northern Cape Province of South Africa. The family was terrorized in their home before being driven off to an open field to be killed.

Five suspects are under investigation for the murder of this family. They will be held until their trial on August 13. The suspects have been charged with murder, robbery and kidnapping. But the primary motive does not appear to be theft.

“This doesn’t seem to be a random farm attack,” one police officer told the Sunday Times. “Why kidnap the couple but not withdraw money from their bank accounts? Why bury them where they were found when they could have been left dead at home?”

The brutal nature of the attack indicates terrorism was the real motive. The Brant home was smeared with blood, indicating the family was tortured before being killed.

Farm attacks are becoming increasingly common in South Africa. A July 2020 AfriForum report shows that farm attacks have increased almost fivefold over the past decade, from 115 attacks in 2011 to 552 attacks in 2019. In attacks where a specific crime was reported, the attackers attempted to murder someone 61 percent of the time and tortured someone 9 percent of the time. Common tortures include pouring boiling water down ears, using power tools to bore holes in the victim, burning with hot irons, and slitting throats.

The Transvaal Agricultural Union estimates that though 14 percent of farm murder victims are black, almost every farm torture victim is white. “It is important to note that not all who are murdered on farms are white people,” the Deputy ceo of AfriForum wrote in a 2017 report. “On the other hand, it is equally important to note that black farmers are not subjected to the same levels of torture as their white counterparts.”

A direct correlation has been established between anti-white hate speech from South African politicians and farm attacks. A March 2017 AfriForum study noted that the number of farm attacks spikes when a politician delivers a speech vilifying white farmers. When President Jacob Zuma took to the stage in June 2012 to sing about massacring white farmers with machine guns, farm murders spiked 36 percent over the previous month.

Farm murders jumped another 92 percent over the previous month in November 2016, when Marxist politician Julius Malema encouraged blacks to occupy white-owned land. “When we leave here, you see any beautiful piece of land, you like it, occupy it!” he told his supporters. “It belongs to you! It is your land! It is the land of your forefathers. It was the land taken from us by white people, by force, through genocide!”

This correlation is a strong indication that torturing white farmers is part of a terror campaign to drive them off their land. The Brant family is among the most recent victims of a violent movement that has been developing for decades. It began in earnest in 1990, when the South African government lifted the ban on the African National Congress (anc), the Communist Party of South Africa, and other Marxist organizations.

The Philadelphia Trumpet has been following this trend for decades.

While many hailed Nelson Mandela’s victory in the 1994 election as the beginning of a new golden age for South Africa, Trumpet editor in chief Gerald Flurry warned, “South Africa is the first of the Anglo-Saxon nations to give away its God-given birthright.”

Late Trumpet columnist Ron Fraser wrote, “Disaster looms huge on the horizon of South Africa, as godless communism has its day bringing an anc-dominated government to power with the apparent full endorsement of Western society.” This analysis was based on Bible prophecy, and much of it is recorded in our free e-book South Africa in Prophecy.

The British, Dutch and Huguenot settlers of colonial South Africa largely descended from the lost tribes of Israel. (For proof of these identities, request a free copy of The United States and Britain in Prophecy, by Herbert W. Armstrong.) The Prophet Ezekiel foretold of a time of violence that would plague end-time Israel if its people turned away from God’s law.

“Make a chain: for the land is full of bloody crimes, and the city is full of violence. Wherefore I will bring the worst of the heathen, and they shall possess their houses …” (Ezekiel 7:23-24).

The Bible prophesies that so many bloody crimes will occur that they will be like links in a chain—one following right after another. South Africa’s overall homicide rate is 36.4 per 100,000—higher than any country outside of the worst drug-producing regions of Latin America. This nation is a preview of the type of violence coming to the U.S. and Britain if people continue to reject biblical truth in favor of godless communism and false religion.

To understand why America is hurtling toward the same type of anarchy and violence that plagues South Africa, please read “America Has Been ‘Fundamentally Transformed,’” by Gerald Flurry. Like South Africa, the U.S. is in the process of giving away its God-given birthright.