Disclaimer: No company sponsored this video. In fact, we have no sponsors. We are funded 100% by you, the viewer. All of the equipment and materials used in this video were purchased by us with our own personal funds. As such, we have no financial incentive to recommend certain brands or products, and none of the companies mentioned in this video were given prior notice that we would be featuring their products. We are happy to help companies develop better products, but we must maintain neutrality in order to ensure the longevity of this content. Specific gear comes and goes, but doctrine lasts a lifetime.

We take this unique approach to encourage a more educational perspective, rather than getting caught up in the tiny details of gear that sometimes overwhelms the tactical community and warfare doctrine in general.

This content is purely educational and does not advocate for violating any laws. Do not violate any laws or regulations. This is not legal advice. Consult with your attorney.

And if you don’t like Patreon, we’re also on Utreon! https://utreon.com/c/S2Underground/ 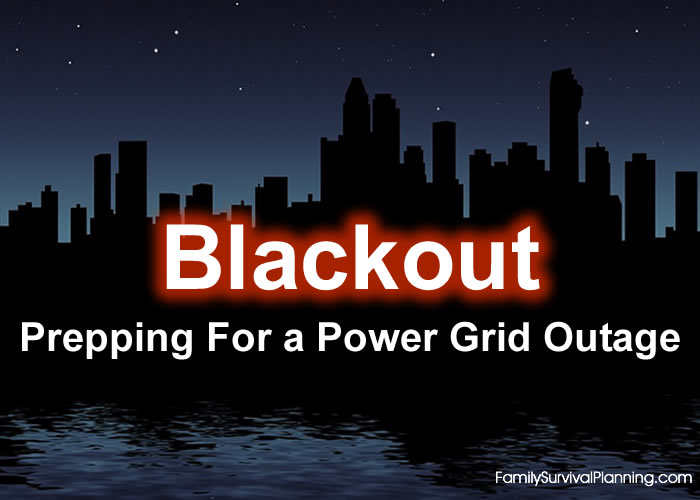 In a new report that warns that the electric grid is the “prime target” of terrorists, Americans are being urged prepare for the up to six months without electricity, transportation, fuel, money, and healthcare.

“People no longer keep enough essentials within their homes, reducing their ability to sustain themselves during an extended, prolonged outage. We need to improve individual preparedness,” said a just-published report to President Trump.

“There needs to be more individual accountability for preparedness,” adds the report, “Surviving a Catastrophic Power Outage,” from the President’s National Infrastructure Advisory Council and published by the Department of Homeland Security.

It looked at the potential of a power outage of up to six months and recommended Americans have enough supplies on hand for a minimum 14 days, a standard for some prepper organizations.

“Build a Culture of Preparedness includes objectives to incentivize investments that reduce risk, including pre-disaster mitigation; closing the insurance gap; helping people prepare for disasters; and better learn from past disasters, improve continuously, and innovate,” said a key recommendation… A prior governmental report also called for presidential action to protect the grid. That report warned of a threat to world order in an attack…

Some of those warnings from the report are below:

From Chris at Off Grid Ham, An Introduction to AC Inverters. Even if you’re already happily running all of your ham radio equipment off grid, at some point you might wish you could run something that wants 120V AC. If you’re not a ham radio operator, and you’re looking into running some household stuff from a battery/solar system, then you also are probably interested in learning something about AC inverters.

AC inverters are like other technology in that during the early  years they were very expensive and didn’t work particularly well. Over time they were tweaked and improved and today inverters are better and less expensive than their ancestors. I suggest including an inverter in your off grid plans even if you don’t think you need one because the day may come when it will be an essential asset. Furthermore, if you have any intentions of owning a larger solar energy system to power common household devices, then a familiarity with AC inverters is a must…There are three basic types of AC inverters on the market: Square wave, modified sine wave, and pure sine wave. Which one will work for you depends on what you plan on powering and of course your budget…

Costco in Kennewick is currently having a sale on the Champion Dual Fuel 7000 watt generator. This generator sold for $799 a couple of years ago, and currently sells for $699 on Costco’s website.  In store, it is on sale now for less than $550.

Nov. 2019 Edit: I notice that a lot of people are still hitting this post from the summer of 2018. I haven’t seen this model at Costco for several months, now. It seems to have been replaced by the Firman dual-fuel generator (10k/8k gas, 9k/7.25k LPG) which is a higher priced generator.

Easily monitor power output and track maintenance intervals with Intelligauge, which allows you to keep track of voltage, hertz and run-time hours. Designed with a low oil shut-off sensor, this unit includes 1.2-quarts of 10W-30 oil.

Operate your Dual-Fuel generator right out of the box on gasoline or propane, and easily switch fuels with our patented fuel selector switch that allows for safe switching between fuel sources.

With a noise level of 74 dBA from 23 feet, which is a bit louder than a vacuum, this machine can provide home backup in an outage, plus the Volt Guard™ built-in surge protector prevents overloads and keeps your equipment safe.

Champion’s thoughtful packaging and clear directions make setup hassle free, plus the foldaway U-shaped handle makes it easy to store, while the never-flat tires in the included wheel kit make transport a cinch.

Buy this EPA certified and CARB compliant generator with confidence – Champion Support and our nationwide network of service centers will back up your purchase with a 3-year limited warranty and FREE lifetime technical support.