This article is from American Founding Principles.

Once again we are faced with another tragic school shooting and once again many people beat their drums for gun control. Yet, is gun control the solution to our nation’s recent epidemic of mass shootings? Asked in this way, the answer is obviously yes, because other than firearms, there is nearly no other object that people use to lethally “shoot” another person. But such a question is equivalent to, “Have you stopped beating your spouse?”

The first step in finding a solution to any problem is defining the problem one is trying to solve. Putting a definition, to the issue at hand, in the form of a question, the actual question should be, “How can we, as a society, curtail mass murder in America, no matter the method used?”

It would be very short sighted to assume that firearms are the cause of this epidemic and ignore all other possible reasons for what is happening. Imagine if we were able to magically stop killers from using guns and they instead turned to some other form of murder that is more lethal. Our efforts would have been futile indeed. Besides, firearms have been a prevalent part our society since its inception, and until relatively recently people did not use them to indiscriminately kill others, even when fully automatic weapons, like the Thompson submachine gun, were commercially available without restriction.

The second step in finding a solution to any problem is collecting information on all the possible causes that may contribute to the problem at hand, and then researching them down to their root cause. Root cause analysis is critical to problem solving, because only removing a surface cause will superficially affect the outcome, but the problem will still persist.

Some possible causes, which have been proposed by pundits, for this shift in the willingness of a few people to indiscriminately kill their fellow Americans, is prescription psychotropic drugs, single parent homes, and a culture that glorifies killing via many forms of social media, such as movies and video games. Without further research into all the non-jihadist mass murders in America, it is impossible to speculate how much these potential causes influenced the killers in each of the numerous incidents since 1966, when Charles Whitman shot people from the University of Texas clock tower, and especially those that have occurred since Columbine.

A root cause behind each of these potential causes is the belief that it is acceptable, or at least not prohibited, to murder another person…

…First, this is a republic, not a democracy. The majority has absolutely no say in what rights the individual has. Those rights, though often treated as privileges in many states and cities, remain rights, the security of which may have to be defended the old-fashioned way, through force. Chief among them is the right to self-defense using whatever tools one is most comfortable with, including and especially guns. This is not up for debate, it is not even up for discussion. Hold all of the meetings and all of the discussions that one chooses to have, but it still comes down to having to enforce whatever law is agreed upon by people who were not elected to arbiter our rights away, but to defend them with the full force of law. Granted, they may take the coward’s way out, they are good at that, but then it falls to us to enforce our own rights. One only possesses the rights they are willing to defend with their lives.

Second, their conclusion that some sort of gun restrictions will end school shootings is absolutely false. There are only two solutions to school shootings: 1) end public schools and the congregation of hundreds of children in the same place at the same time; 2) harden those schools with armed guards, administrators and/or teachers. Simply putting the weapons in their hands will stop mass killings at schools. It has worked at every venue it has been tried, schools are no different.

If those solutions are not part of the discussion, then there can be no solution at all and only a gigantic social upheaval that will make the occasional school shooting pale in comparison to the carnage served up by one section of the nation deciding to debilitate, unarm and make victims of the other half. Everywhere there is strict gun control there is rampant crime, a concentration of gang violence and murder rates that are unacceptable to those of us who understand what a republic is and how it works…

Brandon Smith of Alt-Market weighs in “The solution is simple — abolish all gun free zones…” in Mass Shootings Will Never Negate The Need For Gun Rights.

And for those who think “these things only happen in America,” we present the following statistics from crimeresearch.org. 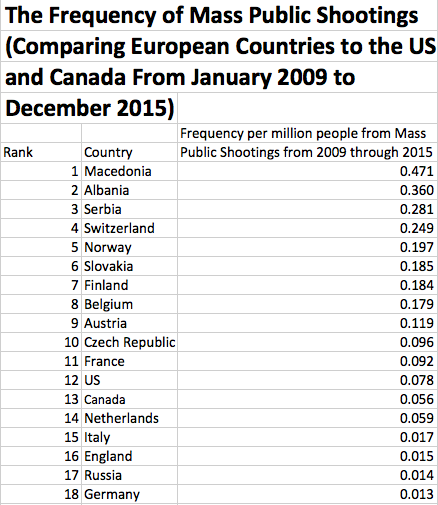 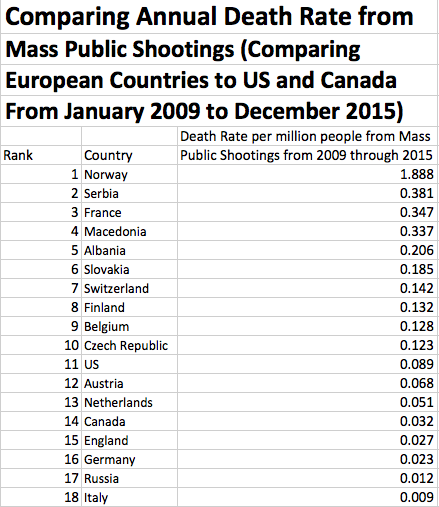