…last weekend, came Dorian, which Nova Scotia Power described to me as “the most destructive storm we’ve yet seen.”

…After a couple of hours, the lights flickered and went out. Come evening, as was happening across the province (and does in any disaster-struck Canadian community, I’m sure), several of us checked in on other households, those of seniors especially. We were lucky, the only tree we lost was a lilac. In the Annapolis Valley, the farmers were not – a good part of their apple and corn crops were destroyed – and neither were our immediate neighbours, two enormous maples falling down upon their house. Against what would have been official advice – had we been in a position to receive it – we used a ladder to check the integrity of the roof, walls and windows. In the drenching rain, a neighbour helped me get my generator started before we tried, unsuccessfully, to do the same for a friend down the road and gave him warmth through company instead.

Ours was one of Nova Scotia’s 400,000 households without power (the number of people obviously much greater) – this, a staggering 80 per cent of the population. At dawn the next morning, wondering what else was in store, I lay in my cold bed listening to the CBC, national and local, on our battery-powered radio – a part of the kit advised by government emergency-management co-ordinators – waiting for information about what I should or was able to do in the aftermath.

…Astonishingly, or perhaps not, the CBC was of no practical use. You’d think a public broadcaster would be communicating vital information after an occurrence such as Dorian and quite reasonably expect, by district, information in the event of a medical emergency (Nova Scotia is already disastrously short of services on sunny days); a list of roads safe to travel; of gas stations that are up and running; news about the airport and flights; and regular updates on the restoration of services – for it to be making public service announcements, in other words, and for these to be broadcast on the hour. Instead, the CBC was reporting the hurricane as entertainment… I was told…that if I wanted Hurricane Dorian updates, to go to the network’s Storm Centre online … where the CBC had also posted pictures!

Except that most of us could not. The CBC evidently had no idea that what “no power” means for Nova Scotians is no light, no water, no heat, no landline for those without analog sets – and no internet.

Which is when the community kicks in…

What we have learned from Hurricane Dorian, but also the countless other “natural” disasters that have struck Canada in recent years – the Fort McMurray fires and the flooding of Canmore, Gatineau and High River come to mind – is that when, as will happen more and more, infrastructure fails, communities’ self-reliance is key…

And so, ironically, we have reached a point where the environmentalists of the left and, on the right, libertarians and survivalists, are thinking along the same lines: The state, when it is interested, cannot be depended upon, so get off the grid, create your own…

We’re alone out here, and it’s hard not to see the failings that natural events such as Dorian put on show, as harbingers of worse to come. No, it’s not an entertainment. There’s serious work to be done.

Click here to read the entire piece at The Globe and Mail.

Hurricane Watch Net is now active (Update: no longer active) on 14.325 MHz and 7.268 MHz as tropical storm Dorian, expected to reach hurricane strength before landfall, passes to the north of Puerto Rico, US Virgin Islands, and Dominican Republic before heading for the Florida and/or Georgia coast. (Update 8/29/19: Tropical Storm Dorian was upgraded to Category 1 Hurricane around 2pm Eastern time today. It is expected to make landfall in the US as a Category 4. Update 9/3/19: Hurricane Dorian has been downgraded from a category 5 to a category 2 hurricane. Update 9/4/19: Hurricane Dorian has re-intensified to a category 3 hurricane. Update 9/6/19: Dorian is now a category 1 hurricane.)

he Hurricane Watch Net has been in continuous operation since 5:00 PM EDT – 2100 UTC Saturday afternoon and will remain in operation until further notice.

Hurricane Dorian made landfall around 11:00 PM (0300 UTC) Sunday evening along the east end of Grand Bahama Island as a strong Cat 5 Hurricane with maximum sustained winds of 180 mph. After landfall, the storm all but stalled. 12 hours later with little to no movement, the storm still had Cat 5 winds of 155 mph.

After being over Grand Bahama Island as a stalled Hurricane, after 36-hours of barely drifting across the island, Dorian finally began to move away with maximum sustained winds of 110 mph.

Member of the Hurricane Watch Net have been reading the latest bulletins and updates as well as making calls to the islands for any reports…checking on their well-being, any weather data, damage reports, etc. However, when a storm is stalled over an area beginning with sustained winds of 180 mph and slowly dropping to 110 mph, that amount of high wind and continuous storm surge, major catastrophic damage is to be expected.

Video recorded by recon helicopters over Abacos Island on Tuesday began to reveal the extent of damage caused by Dorian. What we saw is just absolutely heartbreaking. Overnight, Dorian pulled away from Grand Bahama Island. I’m sure we will get an idea to the extent of damage to the island by way of recon aircraft today as well as feet on the ground with help.

From Florida Division of Emergency Management:

Residents should have 7 days of supplies in preparation of hurricane #Dorian. A stocked supply kit has water, nonperishable food, prescription medications, flashlights and extra batteries…

Over the weekend, on Saturday, Puerto Rico Emergency Management Agency (PREMA) Commissioner Carlos Acevedo urged the island’s resident to put into effect the Family Plan the agency has suggested for emergencies. This includes ensuring a first line of defense in terms of water, canned goods, medicines, batteries, and fuel for power generators. Residents heeded the advice, heading out to markets around the island to purchase water and supplies, and later that day, hundreds of people went to supermarkets to buy water and other supplies in larger-than-usual quantities. By Sunday, vendors were limiting bottled water to between two and five packages, depending on locale.

The government of Puerto Rico is assuring the public that it’s better prepared than it was for Hurricanes Irma and Maria 2 years ago. New Commonwealth Governor Wanda Vázquez has been meeting with agency heads to make sure storm preparation plans are in place.

“About 30,000 people still have blue roofs installed in the wake of Irma and Maria,” Puerto Rico PIO Angel Santana, WP3GW, told ARRL. He said this situation presents a primary safety concern for those affected residents.

8/29/19 Update: Parts of Florida are already experiencing bottled water and fuel shortages as people prepare for the coming storm.

Speaking to the Orlando Sentinel, Orlando resident Nicholas Boyd said during the last storm, the art teacher had put off stocking up on supplies a little too long,

“Last time, I put it off a little too long, and there was none left,” the 35-year-old Boyd said, adding that he wanted to be “a little more proactive” this time around. And he isn’t alone: Home Depot said it had already sent some 160 truckloads of various products to stores in Florida so far. 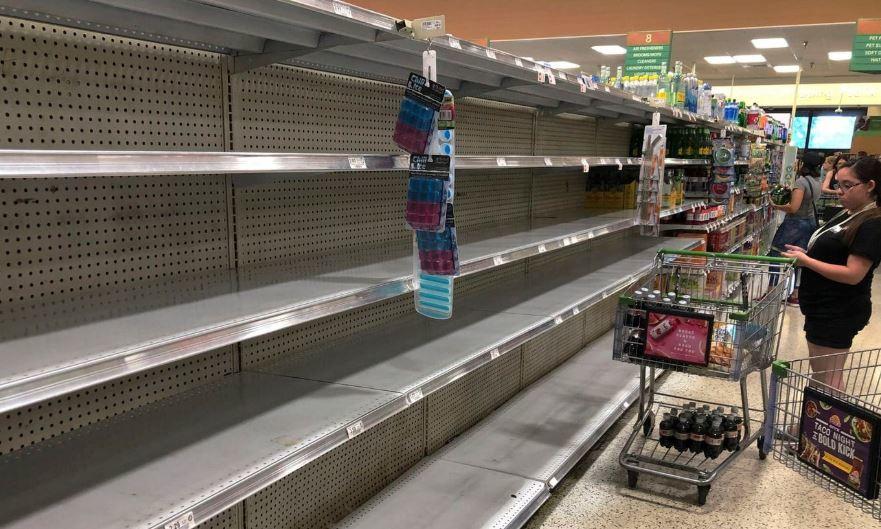 “We have five distribution centers in the Southeast working to get more materials to stores as quickly as they can,” a spokesperson said, adding that the chain is “prioritizing those in-demand items like generators, batteries, water and plywood.”

Reporting from a Publix in Baldwin Park, the Orlando Sentinel noted that shelves of water were left largely empty, and employee were offering customers bottles of Fiji water instead of the large multi-gallon jugs they were looking for.

“We like to get the 5-gallon jugs because we have a dispenser at home, but they’re out of those,” said 37-year-old Orlando resident Shannon Taylor, a professor at the University of Central Florida’s college of business. “So instead I went into the aisle with the bottled water, and they didn’t have any, but right when I was walking out of there, one of the Publix employees came with a cart of a few extra boxes of Fiji.”

From the Amateur Radio Relay League:

Hurricane Watch Net (HWN) Manager Bobby Graves, KB5HAV, said the net is “keeping a very close eye” on Tropical Storm Barry, which could develop into a Category 1 hurricane. The HWN has announced no plans to activate, however, and remains at Alert Level 2 — monitoring mode.

At 2100 UTC, the storm’s center was 90 miles south of the mouth of the Mississippi and some 175 miles southeast of Morgan City, Louisiana. The storm is generating maximum sustained winds of 40 MPH with higher gusts and is moving to the west at 5 MPH.

“Although hurricane watches and warnings are now in effect, the National Hurricane Center states that Barry could become a hurricane prior to landfall,” Graves noted. “Even if Barry does not reach Category 1 hurricane status, wind gusts to hurricane force are possible in the warning area. Regardless, if Barry becomes a hurricane or not, this system is looking to be a major rainmaker.”

Forecasters concur that the storm will continue to intensify until making landfall. A danger exists of life-threatening storm surge along the coast of southern and southeastern Louisiana. The storm’s slow movement will result in an extended period of heavy rainfall and the threat of flooding along the central Gulf Coast and inland through the lower Mississippi Valley through the weekend into early next week, forecasters said.

When activated, you will find us on 14.325 MHz (USB) by day and 7.268 MHz (LSB) by night. If propagation dictates, daytime operations will be conducted on both frequencies simultaneously. Why do we state these frequencies without a plus or minus amount? Because those who are operating using marine radios have to program in the frequencies – marine radios do not have a VFO or RIT. Furthermore, these two frequencies come preprogrammed into many marine radios. Many non-hams listen in via shortwave radio and know this is where to find us when we are activated…

NOTE: During any Net activation, operations on 7.268.00 MHz will suspend @ 7:30 AM ET to allow the “Waterway Radio and Cruising Club Net – WRCC” (aka, the Waterway Net) to conduct their daily morning Net. If required, due to poor daytime propagation on 14.325.00 MHz, operations on 7.268.00 MHz may be required at the conclusion of the Water Way Net, generally around 8:30 AM ET.

Whenever the Hurricane Watch Net is not active, you can hear the latest information on 14.300.00 MHz.

As a special note to those who monitor when the net is active, we ask that you please honor our request for you remain quiet unless specifically called upon for assistance.