From the Yakima Herald, Yakima County has highest rate of COVID-19 cases in Washington, double the state rate: 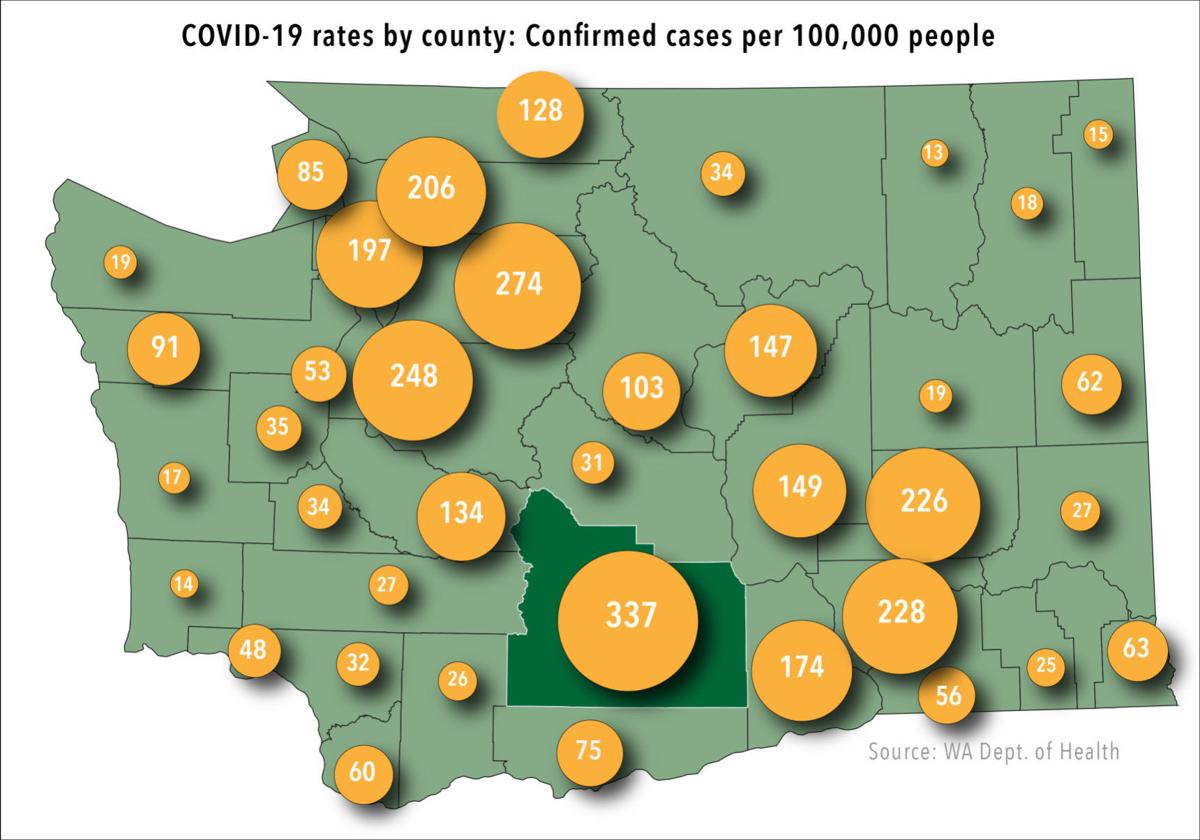 Yakima County has the highest rate of COVID-19 infections in the state by a significant amount, and is double the state average, according to state Department of Health data.

The county had a rate of 337 cases per 100,000 people, according to the latest state data, accounting for the 840 Yakima County cases recorded by the state as of midnight on Monday.

Yakima County also has the second-highest rate of testing for COVID-19 in the state after Snohomish County, according to Yakima Health District spokeswoman Lilian Bravo.

As of Tuesday evening, Yakima County had 886 confirmed cases of COVID-19, including 38 deaths, according to the Yakima Health District. Twenty-five people were hospitalized with the respiratory virus. The health district did not provide updated numbers Wednesday due to technical difficulties.

On Tuesday, the health district released a map showing the breakdown of confirmed COVID-19 cases among residents in each city and town in Yakima County.

The health district map shows where community members infected with the virus live, not where they contracted the virus, said Bravo. Community members can contract the virus from anywhere in the community, she said — not just areas with higher rates of residents with confirmed cases.

The health district mapping is based on COVID-19 cases per 100,000 population, not actual case numbers in each town or city. Cases in long-term care facilities, which account for about a third of cases in the county, were not included in the map to prevent the data from being skewed. P.O. Box addresses were also excluded.

High densities of cases can be seen in parts of Yakima, Sunnyside, Toppenish, Wapato and Tieton, among others.

The high case rate in the county compared to elsewhere in the state can be attributed to outbreaks in long-term care facilities, as well as the high proportion of essential workers in Yakima County, Bravo said.

About 72,700 of 115,000 Yakima County jobs, or 63%, are in essential industries like agriculture, health care and wholesale trade, according to job figures from the first quarter of 2018 provided by the Yakima County Development Association.

This compares to 54% statewide.

“Context is that over 60% of jobs are still considered essential in Yakima, so we’re not as shut down as some areas in the state,” Bravo said. “Having more individuals still working, not necessarily always being able to work from home, having to show up to work — that’s going to put them at a higher risk of infection.”

Gov. Jay Inslee signed the measure Tuesday implementing the new rules, which rank among the strongest statewide mandates in the nation. California and Oregon have similar laws.

The move comes as President Donald Trump’s administration has cracked down on immigration by increasing migrant detentions and attempting to cancel the Deferred Action for Childhood Arrivals program.

Under the new Washington state law, local law enforcement agencies are broadly prohibited from asking about immigration status or place of birth unless directly connected to a criminal investigation, and both local jails and state prisons are prohibited from complying with voluntary “immigration holds” requested by federal authorities, or from notifying federal authorities when an immigrant is about to be released from their custody.

“Our state agencies are not immigration enforcement agencies,” said Inslee, a Democrat who is also running for president. “We will not be complicit in the Trump administration’s depraved efforts to break up hard-working immigrant and refugee families.”

Critics say sanctuary laws hamper the ability of police to do their job.

Republican state Sen. Phil Fortunato, who voted against the Washington law when it was before the Legislature, said he thought it would hamper the ability of police to take action against subjects they suspect to be illegal immigrants.

“This not only puts law enforcement at risk, it puts private citizens at risk,” Fortunato said…