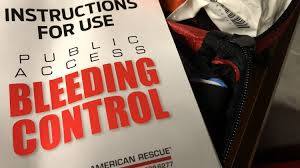 Chuck at The Medic Shack talks about amputating injuries, first aid for them, and post aid while using photos from his son’s recent injury. So be warned of finger amputation photos through the link.

NOTE: Some of the images at the end of this are graphic. They are of my son’s finger and the wound.

This site contains affiliate links to products. We may receive a commission for purchases made through these links. This does NOT increase the price of the product you may purchase.

Normally when I write a blog post its from current events, past experiences both civilian and or military. This time I am using my youngest son as our topic. This past week (Tuesday the 4th of August) he had a pretty normal day at work. He works at a motorcycle accessory shop. Sells gear and he is about the most requested tire man in the city.

People bring him tires to mount that they bought from all over. From the store he works at to mail order The reason he is so requested is he cares for the customer and the motorcycle. Never scratches or damages a rim. He recently did a set of tires that the rims cost 2 grand each. Personally requested by the bike owner. Not bad for a 19 year old young man. Today’s post ties in to one from may on one we did years ago on Emergencies

Where did my finger go?

He and his manager were moving out the old tire machine for the brand new one the store bough. As they were lifting it on the pallet the old one came on, the bead breaker slipped out of position, dropped down and amputated his lift index finger between the 3rd knuckle and the nail bed. (Knuckles are counted from nearest to the hand to the finger tip. Think of drawing and angle from the cuticle backwards from that point at a 45 degree angle to the 1st knuckle. If folks have taken my classes or shooting classes from some of my friends, you have heard me say that a traumatic injury is not a painful as it looks. For a while at least.

According to Ryan it felt like he pinched his finger. Not to bad. He went to keep lifting and he looked down and saw the blood covering the floor and tire machine. His mechanic glove was torn and the end of it was missing. The body has amazing self preservation tools. I’ve know gunshot victims who were shot, walked down a flight of stairs with a suspect in custody, put them in the patrol car and then died.

STOP THE BLEEDING! This cannot be stressed enough STOP THE BLEEDING. Even an injury like my son Ryan has can be dangerous if the bleeding is not stopped. When blood is spilled on the floor it looks 5 times as much as it is.

The blood loss Ryan had was about ¼ a cup 60 cc more or less. It looked like more. MUCH more. 2 fluid ounces is not much in the grand scale of the body. An adult will have approximately 1.2-1.5 gallons (or 10 units) of blood in their body. The average us 1.2 gallons or 5 liters

Now the scary part. The ½ cup of blood he lost was in the first minute! And it was not pure arterial flow. It was a mixed flow. The finger tips do not have large arteries in them The vessels are about 1/32nd of an inch in diameter (.79 mm). DIRECT PRESSURE.

Ryan has been trained extensively in first aid. Well he HIS my and his mom’s son. Growing up in a medical family has advantages. He squeezed below the wound and yelled he needed something to help hold it. His manager and the vendor grabbed shop towels and put pressure on it. Sat him down with his hand higher than his heart and called 911.

If at all possible retrieve the amputated part, wrap in clean cloth or sterile bandage material, place in a baggie, and place that baggie into one containing ice. This gives the surgeons the best chance of re-attachment.

There is a sorted history on the tourniquet. Lets go back to the 1980’s As an old medic, when we had a wound that needed a tourniquet, we put it on, marked a “T” on the patients forehead with date and time of application. If your patient was going to be with you for a few hours, every hour or so we would loosen the tourniquet for a short time to allow blood to the part below the tourniquet. The reapply it.

This did not work as well as expected. For a tourniquet to work it has to be tight. TIGHT. When it is applied correctly. Tissues will be damaged. When tissue is damaged there is swelling. We call it edema. So when we let off the tourniquet, let some blood down, then re applied it, the bleeding would stop and all was good in the world. Until the patient bled out. What happened was when the tourniquet was re-applied, it compressed the edema, and stopped the flow. But once the edema had been moved, the tourniquet was now loose…(continues)

Click here to read the entire article at The Medic Shack.