Here’s an article from Chris Warren of Off Grid Ham, writing about options for DIY antennas – Discussing Vertical And Wire Antennas

A topic so deep and wide.

I messing around with you. There is no such thing as an antenna specifically for off grid radio. But since off grid amateurs tend to be practical, do-it-yourself types, some vertical and wire antennas are more more appealing than others. What are the options, and how well do they work? We can’t possibly cover everything in one article, but we’ll go over the most popular types of antennas for off grid hams and talk about the function of each of them. vertical and wire antennas

There are two basic types of antennas for off grid radio: Vertical and wire. Yes, I am aware that there are many others: Beams, loops, etc. But remember we’re trying to keep it simple, practical, and relevant. A vast majority of hams end up using either a vertical or a wire antenna.

The reasons why are clear. These antennas are easy and inexpensive to build, and (for the most part) really do work. Think about all the advancements in technology. Radios have gone from massive tube farms to computerized communications centers with color displays and features that would have been Star Trek-ish just ten or twelve years ago! But at the other end of the coax, antennas have not fundamentally changed over the entire history of radio. You can compare a 50 year old ARRL Antenna Book to a 2020 edition and find nearly the same content in each of them. vertical and wire antennas

About the ARRL Antenna Book. vertical and wire antennas

It would be worth your while to own a print copy of the ARRL Antenna Book. It can be very technical and deep, maybe more than what the average ham is willing to digest, but wow, what a wealth of information. When you need to answer an obscure antenna question or look up a way-out-there math equation, the Antenna Book will come through. New copies can be quite expensive. I suggest buying an older used edition for a fraction of the cost. It doesn’t really matter because the information essentially never changes. My personal Antenna Book is nine years old and I have no plans to update it.

I don’t have a real high opinion of ARRL books in general, but the Antenna Book is an exception. It’s stellar. Every ham should own one.

My very first antenna was a vertical, a Hy-Gain 14AVQ to be exact. I bought it used because, well, when you’re fourteen years old cobbling birthday & odd job money together for radio gear, that’s how you roll. The 14AVQ has been in production since at least the 1970s and is still available on the market today. I had a blast with that antenna and made many solid contacts on it. vertical and wire antennas

Vertical antennas offer an omnidirectional signal pattern, take up very little space, and are easy to install. They do not necessarily require support structures such as trees and buildings (I mounted my 14AVQ to a pipe pounded into the ground). Functionally they have a low angle of radiation, which is favorable to DX. There is also some evidence that vertically polarized antennas are better for short range (ground wave) communications.

On the negative side, vertical antennas are harder to home-build and tune compared to wire antennas. Complicating that, commercially made verticals can be expensive. The Hy-Gain 14AVQ of my youth sells new for about $230.00. That’s a lot of money for what is essentially just an aluminum pole with some coils in it. The research & development costs, which I acknowledge can be very high, were amortized off the books decades ago. With that debt long paid off, the 14AVQ represents huge profit center for the manufacturer. This pattern can be repeated for almost any commercially made vertical antenna. Once the R&D costs are recovered, these antennas are basically money presses for the manufacturers.

Lastly, vertical antennas usually require ground radials. Where will you put them? If your antenna is mounted at ground level, you can just bury them in the dirt. Roof mounted verticals may be more tricky. There is no absolute rule for how many ground radials are needed, but more is better. 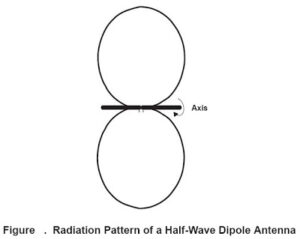 There is little to dislike about wire antennas. They can be easily made from materials most hams already have around the shop. Wire antennas done right really do work! The dipole is the “Mother antenna,” the antenna all others are based on. Wire antennas can be bent and shaped to fit your space. If you have to bend or droop a wire, it’s generally not a problem. Horizontal wire antennas also have a low angle of radiation, but it is dependent on elevation from the ground. This is why amateurs interested primarily in NVIS communications should not mount their wire antennas more than 30-50 feet up. There is such a thing as “too high”.

Wire antennas have two main disadvantages. First, they usually require two or more support structures. For a fixed station, this means having buildings or trees in the right places to hold your antennas up. For portable use, it means picking a site with trees or other tie points, or bringing a support system with you. By the way, many public parks prohibit affixing anything to natural features, even temporarily. Be respectful and verify what you’re allowed to do before you start tossing wire up in the trees.

Although wire antennas can sometimes be bent and shaped to fit a defined space, doing so may affect performance. Antennas are designed to be a certain shape for a reason. Anything that messes with the physics of an antenna is going to change the way it works. Changing the original shape of a wire antenna does not necessarily degrade performance, but it may result in a situation not favorable to your operating needs, such as when the radiation pattern is altered. Many hams have no choice and must do some antenna gymnastics to make their stations work. Although imperfect, these alterations are usually tolerable.

What about store-bought wire antennas?

I generally advise against buying commercially-made wire antennas. They do work well, but with a few exceptions they are not a good value for the money. One well known company is offering a portable “tactical dipole” for $400.00. Granted, it’s very well planned with a slick carry case and other handy features, but in the end it’s still just a dipole. A four-hundred dollar dipole! This illustrates a trend in the prepper/survivalist community where including the word “tactical” in a product name makes that product cost 3-5 times as much as it should.

Wire antennas have one more big plus. A “Hail Mary” antenna can be any available length of wire. In more formal language, they’re called random wire antennas and they are exactly what the name implies. In an emergency, you can literally toss a random length of wire out the window, correct it to 50 ohms as best you can with an antenna tuner, and go. It won’t be very efficient, but you will get a signal out.

I have a random wire antenna as part of my go-kit. It works surprisingly well with my 5 watt FT-817. It would never be my first choice, but I’d be very happy to have it as a last choice.

QSL.net has this amazing wire antenna reference that lists nearly 400 different wire antennas and diagrams on how to make them. Some of the designs are kind of way out there and I’m not sure they would work, but experimenting is part of the fun. The website cuts out complicated math and lengthy explanations; it just gives short & simple recipes on how to make some great antennas.

WA2OOO has a very cool calculator to determine the size of several popular wire antennas.