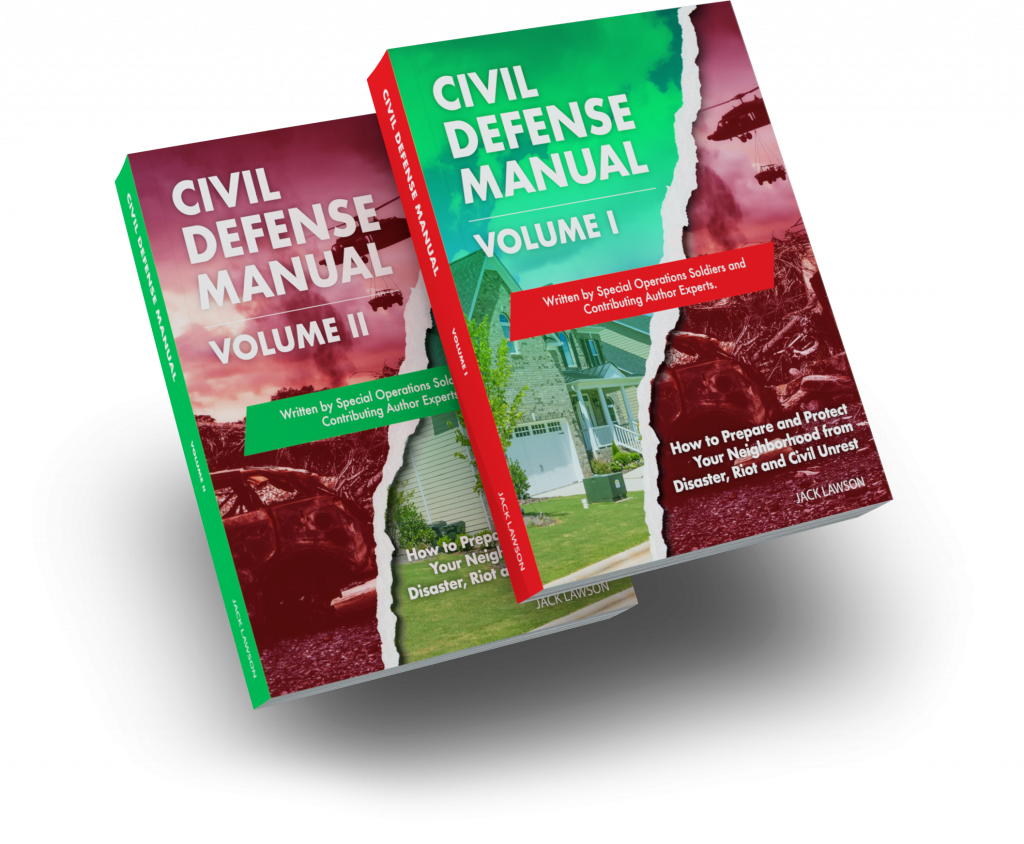 Jack Lawson is one of the co-authors of the now out-of-print but still much sought after book A Failure of Civility. He has now published Civil Defense Manual, Vol. I & II: How to Prepare and Protect Your Neighborhood from Disaster, Riot and Civil Unrest.

An overview of some subjects…

Update: Having received a copy of Civil Defense Manual, I can now see that contributing authors include Sam Culper of Forward Observer, NC Scout from Brushbeater blog, former Navy SEAL Matt Bracken, Concerned American from Western Rifle Shooters Assoc., and SELCO among others. All of those names should be familiar to readers of this website, as I’ve posted or linked to all of them previously. Their contributions are mostly in the form of chapters dealing with their specialties, like communications for NC Scout and intelligence by Sam Culper. At least some of those sections may have been previously published by those contributors. The two volumes are letter-sized paper, perfect bound, for a total of 950 pages.

No folks… not that kind of weapon. Food… or the lack thereof. Food is a weapon that can destroy people, movements, groups, nations… and those with enough power to control food and use it as a weapon… don’t have to lift a finger, fire one bullet or even engage their enemy.

All they have to do is sit back and wait for your emaciated and starved carcass to start rotting. Then what will come true is what Charles Heston said at an NRA Convention… “You can have my rifle… but you’ll have to pry it from my cold, dead hands!” That’s what those who use food as a weapon will do… wait until you’re dead and cold. And as an added bonus… they have that fine firearm you were going to defend your lifestyle with…

Update (2022): You can also read a review of the Civil Defense Manual by Joe Dolio, author of the Tactical Wisdom book series.

It’s been said that the measure of a man’s intelligence is often how much he agrees with you. I felt that way as I read Volume 1 of Jack Lawson’s Civil Defense Manual. I’ll put link down below. Since he agrees almost completely with me, the man is clearly a GENIUS.

You’d think as an author writing books about preparedness and community defense, I’d be some sort of all-knowing expert, but the truth is, I realize that I’m not. I frequently seek other sources like Clay Martin’s outstanding books, Max Velocity’s material, and even some fiction with great tips in them, like Mark Sibley’s Mongol Moon (links to all these on the Recommendations page). The reason I do this comes from the Ultimate Tactical Handbook:

Where there is no guidance the people fall,
But in abundance of counselors there is victory.

The Civil Defense Manual is a hefty 2-volume set, and while it’s written by Jack Lawson, several experts contributed to the work, including some of my friends and advisors. People like Matt Bracken (EnemiesForeignAndDomestic.com), Mike Shelby of ForwardObserver.com, and NC Scout for radio…

Noell Bishop of Bishop 30 Solutions has written a brief introduction at American Partisan on A Practical Approach to a Neighborhood Defense Plan.  If you find that you are interested in more detail on this topic, you can try to get your hands on a copy of A Failure of Civility  by Mike Garand and Jack Lawson which goes into detail on organizing neighborhood protection teams. It is hard to find these days, but AMP-3 still had some copies last I checked. (Update 12/2020: Jack Lawson has published a new book set Civil Defense Manual which you can from his site.)

Before we dive into the subject of Neighborhood Defense, I thought I would share with you some of my experiences that lend to my thoughts on the matter. Although I have actually studied the subject I have had some events that have been very beneficial to me on the subject.

In 2005, I was a DEA agent assigned to the Houston Field Division in Houston, Texas. Hurricane Katrina hit New Orleans that year. Myself and two other agents along with members of our air wing based out of Houston responded just after the hurricane had passed. What I saw and what I was told to do was somewhat over whelming to say the least. As a reservist, I had already participated in the 2003 invasion of Iraq and, to be honest, what I saw in New Orleans was worse because it was in the United States. Growing up, I had always heard it said that “no matter what, we Americans will stick together.” Well, I’m here to tell you that could not be farthest from the truth there in New Orleans. I’m not going to tell a bunch of war stories but let’s just say I used more of my Army Special Forces training than law enforcement training. When developing a Neighborhood Defense plan, I kind of equate it to a guerrilla base when things get really bad out there. So for that, I draw from my days in training at the JFK Special Warfare Center and School attending the Special Forces Officer Qualification Course and the Unconditional Warfare phase, Guerrilla Base Operations, and my time at Robin Sage and other sources.

In regards to Bishop’s statements above about the conditions in New Orleans post-Katrina, I recently heard another speaker, also former military with several years of duty under fire and also deployed to New Orleans/Katrina, make very similar comments about the horrible conditions there.