Author, economist and political scientist Ryan McMaken has an article at Mises on the Second Amendment and the militia clause. The analysis is, for the most part, good, but not new to those who spent time studying the history of the Second Amendment and the militia. I disagree where he says that “privately-armed citizens can only offer relatively token resistance” to today’s standing armies, and I suspect a lot of enemy fighters would disagree as well, unless we can call eighteen years of war against lightly armed Afghani resistance fighters “token.” 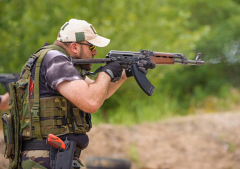 While many defenders of private gun ownership recognize that the Second Amendment was written to provide some sort of counterbalance against the coercive power of the state, this argument is often left far too vague to reflect an accurate view of this historical context surrounding the Amendment.

After all, it is frequently pointed out that private ownership of shotguns and semi-automatic rifles could offer only very limited resistance to the extremely well-equipped and well-armed United States military.

It is often, therefore, just assumed that the writers of the Second Amendment were naïve and incapable of seeing the vast asymmetries that would develop between military weaponry and the sort of weaponry the average person was likely to use.

Was the plan really to just have unorganized amateurs grab their rifles and repel the invasion of a well-trained military force?1

The answer is no, and we know this by looking at the wording and reasoning behind the Second Amendment. The text, of course, reads “A well regulated militia, being necessary to the security of a free state, the right of the people to keep and bear arms shall not be infringed.”

Gun-rights advocates often fixate on the second half of the amendment, claiming that the phrase about a militia is just something that provides a reasoning for the second phrase. Many opponents of gun control even suggest that the only phrase here of key importance is “shall not be infringed.”

The Second Amendment as a Guard Against a Standing Army

Fearful that a large federal military could be used to destroy the freedoms of the states themselves, Anti-Federalists and other Americans fearful of centralized power in the US government designed the Second Amendment accordingly. It was designed to guarantee that the states would be free to raise and train their own militias as a defense against federal power, and as a means of keeping a defensive military force available to Americans while remaining outside the direct control of the federal government.

This grew out of what was a well-established opposition to standing armies among Americans in the late eighteenth century. In his book Eagle and Sword: The Federalists and the Creation of the Military Establishment in America, 1783–1802, Richard Kohn writes:

No principle of government was more widely understood or more completely accepted by the generation of Americans that established the United States than the danger of a standing army in peacetime. Because a standing army represented the ultimate in uncontrolled and controllable power, any nation that maintained permanent forces surely risked the overthrow of legitimate government and the introduction of tyranny and despotism.

We can see this plainly in the speeches and writings of the Anti-Federalists like Patrick Henry, but we also see it in the more moderate attendees of the constitutional convention as well, such as George Mason, who “When once a standing army is established in any country, the people lose their liberty.”

Sentiments like Mason’s did not represent the views of oddball outliers. Rather, Kohn notes, these were mainstream views of the danger of an unimpeded federal military establishment.

But how to combat the power of a federal standing army?

On this, the Americans did not need to re-invent the wheel. After all, the idea of locally-controlled military forces answerable to civil officials was put into place in seventeenth-century England. The English militias had been created out of fear of a large standing army directly answerable to the king.

These ideas were further developed at the Virginia ratifying convention where Patrick Henry mocked the idea that liberties could be preserved by simply “assembling the people.” Without locally controlled, military might, Henry noted, federal force could destroy the independence of the state governments. Similarly, George Mason concluded that the “militia … is our ultimate safety. We can have no security without it.”

As historian Leon Friedman concludes, “the people organized in the state militias were regarded as a counterforce against the threat that the regular army could be used as an instrument of oppression and service in the militia was a right of the citizen that could not be transgressed by the federal government.”2

In light of this, it’s easier to see the key element offered by the “militia” phrase of the Second Amendment.

Even after the adoption of the new constitution, opposition to a powerful federal military continued. Congress opposed not only attempts to increase the size of the professional US army much beyond 1,000 men, but also opposed attempts to mandate any specific training in a “federally organized militia system.” In the end, opposition to federal control of military affairs meant training of militias was “left entirely to the states.”3

As Brion McClanahan has shown, the Second Amendment — like the First Amendment — was never written to apply to the states themselves, but to Congress. The states were still free to regulate the ownership of weaponry in their own constitutions and by their own legislatures. Most state governments, however, elected to include provisions in their own constitutions protecting private gun ownership as an element of the state’s overall militia strategy…

Most are familiar with the right to be armed, while wholly unfamiliar with the duty assigned to that right. The preservation of such right is predicated upon first being armed then proficiency at arms, followed by the assurance of violence should any other right be taken. Your duties accompanying the right of being armed is the capacity for all three of those qualifiers. And that violence must be both quick and decisive; violence has no other legitimate purpose aside from the preservation of one’s liberty.