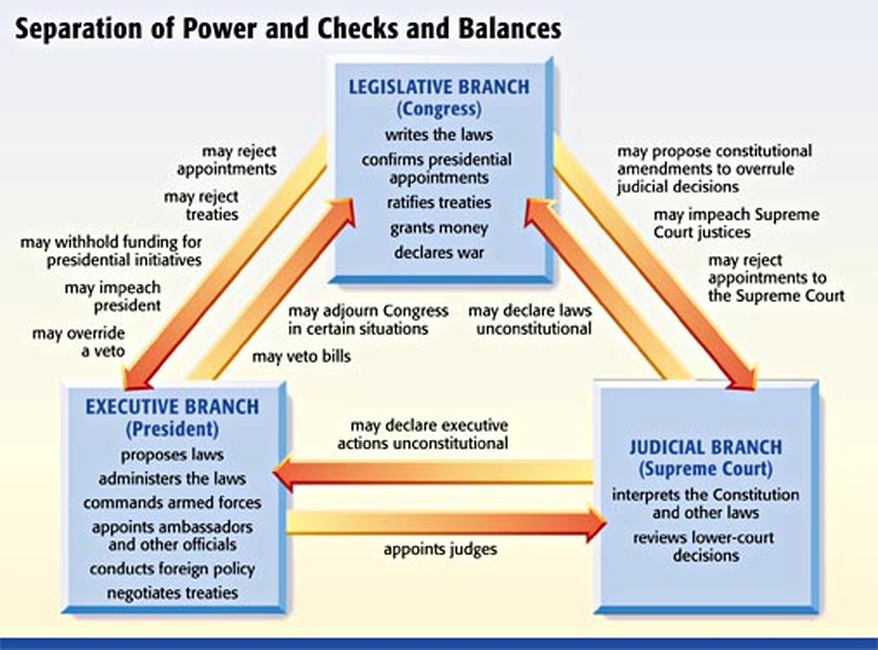 The following is an excerpt from a speech given by Attorney General Barr earlier this month to the Federalist Society’s National Lawyers Convention. In the speech, Barr expands on imbalances which have developed over time which he claims have weakened the office of the President so that it cannot properly balance against the Legislative and Judicial branches. He has some insightful things to say, so stick with it. I’m not sure buy the entire argument, but there is a lot of truth in here.

The consensus for a strong, independent Executive arose from the Framers’ experience in the Revolution and under the Articles of Confederation.  They had seen that the War had almost been lost and was a bumbling enterprise because of the lack of strong Executive leadership.  Under the Articles of Confederation, they had been mortified at the inability of the United States to protect itself against foreign impositions or to be taken seriously on the international stage.  They had also seen that, after the Revolution, too many States had adopted constitutions with weak Executives overly subordinate to the Legislatures.  Where this had been the case, state governments had proven incompetent and indeed tyrannical.

From these practical experiences, the Framers had come to appreciate that, to be successful, Republican government required the capacity to act with energy, consistency and decisiveness.  They had come to agree that those attributes could best be provided by making the Executive power independent of the divided counsels of the Legislative branch and vesting the Executive power in the hands of a solitary individual, regularly elected for a limited term by the Nation as a whole. As Jefferson put it, ‘[F]or the prompt, clear, and consistent action so necessary in an Executive, unity of person is necessary….”

It also entailed the power to handle essential sovereign functions – such as the conduct of foreign relations and the prosecution of war – which by their very nature cannot be directed by a pre-existing legal regime but rather demand speed, secrecy, unity of purpose, and prudent judgment to meet contingent circumstances.  They agreed that – due to the very nature of the activities involved, and the kind of decision-making they require – the Constitution generally vested authority over these spheres in the Executive.  For example, Jefferson, our first Secretary of State, described the conduct of foreign relations as “Executive altogether,” subject only to the explicit exceptions defined in the Constitution, such as the Senate’s power to ratify Treaties.

A related, and third aspect of Executive power is the power to address exigent circumstances that demand quick action to protect the well-being of the Nation but on which the law is either silent or inadequate – such as dealing with a plague or natural disaster.  This residual power to meet contingency is essentially the federative power discussed by Locke in his Second Treatise.

One of the more amusing aspects of modern progressive polemic is their breathless attacks on the “unitary executive theory.”  They portray this as some new-fangled “theory” to justify Executive power of sweeping scope. In reality, the idea of the unitary executive does not go so much to the breadth of Presidential power.  Rather, the idea is that, whatever the Executive powers may be, they must be exercised under the President’s supervision.  This is not “new,” and it is not a “theory.”  It is a description of what the Framers unquestionably did in Article II of the Constitution.

After you decide to establish an Executive function independent of the Legislature, naturally the next question is, who will perform that function?  The Framers had two potential models. They could insinuate “checks and balances” into the Executive branch itself by conferring Executive power on multiple individuals (a council) thus dividing the power.  Alternatively, they could vest Executive power in a solitary individual.  The Framers quite explicitly chose the latter model because they believed that vesting Executive authority in one person would imbue the Presidency with precisely the attributes necessary for energetic government.  Even Jefferson – usually seen as less of a hawk than Hamilton on Executive power – was insistent that Executive power be placed in “single hands,” and he cited the America’s unitary Executive as a signal feature that distinguished America’s success from France’s failed republican experiment…

I am concerned that the deck has become stacked against the Executive.  Since the mid-60s, there has been a steady grinding down of the Executive branch’s authority, that accelerated after Watergate.  More and more, the President’s ability to act in areas in which he has discretion has become smothered by the encroachments of the other branches.

When these disputes arise, I think there are two aspects of contemporary thought that tend to operate to the disadvantage of the Executive.

The first is the notion that politics in a free republic is all about the Legislative and Judicial branches protecting liberty by imposing restrictions on the Executive.  The premise is that the greatest danger of government becoming oppressive arises from the prospect of Executive excess.  So, there is a knee-jerk tendency to see the Legislative and Judicial branches as the good guys protecting society from a rapacious would-be autocrat.

This prejudice is wrong-headed and atavistic.  It comes out of the early English Whig view of politics and English constitutional experience, where political evolution was precisely that.  You started out with a King who holds all the cards; he holds all the power, including Legislative and Judicial.  Political evolution involved a process by which the Legislative power gradually, over hundreds of years, reigned in the King, and extracted and established its own powers, as well as those of the Judiciary.  A watershed in this evolution was, of course, the Glorious Revolution in 1689…

The second contemporary way of thinking that operates against the Executive is a notion that the Constitution does not sharply allocate powers among the three branches, but rather that the branches, especially the political branches, “share” powers.  The idea at work here is that, because two branches both have a role to play in a particular area, we should see them as sharing power in that area and, it is not such a big deal if one branch expands its role within that sphere at the expense of the other.

In recent years, both the Legislative and Judicial branches have been responsible for encroaching on the Presidency’s constitutional authority.  Let me first say something about the Legislature…

A prime example of this is the Senate’s unprecedented abuse of the advice-and-consent process.  The Senate is free to exercise that power to reject unqualified nominees, but that power was never intended to allow the Senate to systematically oppose and draw out the approval process for every appointee so as to prevent the President from building a functional government.

Yet that is precisely what the Senate minority has done from his very first days in office.  As of September of this year, the Senate had been forced to invoke cloture on 236 Trump nominees — each of those representing its own massive consumption of legislative time meant only to delay an inevitable confirmation.   How many times was cloture invoked on nominees during President Obama’s first term?  17 times.  The Second President Bush’s first term?  Four times.  It is reasonable to wonder whether a future President will actually be able to form a functioning administration if his or her party does not hold the Senate.

Congress has in recent years also largely abdicated its core function of legislating on the most pressing issues facing the national government.  They either decline to legislate on major questions or, if they do, punt the most difficult and critical issues by making broad delegations to a modern administrative state that they increasingly seek to insulate from Presidential control.  This phenomenon first arose in the wake of the Great Depression, as Congress created a number of so-called “independent agencies” and housed them, at least nominally, in the Executive Branch.  More recently, the Dodd-Frank Act’s creation of the Consumer Financial Protection Branch, a single-headed independent agency that functions like a junior varsity President for economic regulation, is just one of many examples.

Of course, Congress’s effective withdrawal from the business of legislating leaves it with a lot of time for other pursuits.  And the pursuit of choice, particularly for the opposition party, has been to drown the Executive Branch with “oversight” demands for testimony and documents.  I do not deny that Congress has some implied authority to conduct oversight as an incident to its Legislative Power.  But the sheer volume of what we see today – the pursuit of scores of parallel “investigations” through an avalanche of subpoenas – is plainly designed to incapacitate the Executive Branch, and indeed is touted as such. ..

First, I talked with the district court clerk today. She is very nice, cordial, cooperative and is working to help this be a fair, open hearing. I detect no bias or consternation at all. Very professional. She’s helping to make sure we have a projector and screen to put up exhibits.

Second, we have a cause number that this action is filed under in the clerk’s office. It is: “Citizen 01”. We are the first. If you wish to submit an Affidavit, you may… do so. You can file the completed affidavit at the Yakima County District Court Clerk’s office this week. After that, I would recommend that you bring the affidavit to the court with you.

Third, we have a judge assigned from Benton County. His name is Judge Terry Tanner. He did his undergrad study at the University of Washington and law school at Pepperdine University. He is a prior city attorney for Richland, Pasco, West Richland and Connell. He appears to have a good background to hear this matter. I have no concerns at this point.

Fourth, the hearing is TENTATIVELY set for Friday, March 15, at 11:00 a.m. at the Yakima County District Court in Grandview, WA The district court clerk is still finalizing this. It may change, but I doubt it. I will post any update about that if it occurs.

Again, citizen attendance is welcome. Those who filled out Affidavits for Yakima are encouraged to attend. I hope that we all conduct ourselves accordingly. It is important for the judge to see concerned, responsible citizens standing up for their rights.

Below are videos of a seminar that he gave last month.

In the video below, Scott Brumback speaks at a Liberty State rally in Olympia.

In the video below, Yakima County Sheriff Bob Udell discusses I-1639 at the same meeting as the seminar above.

MAKE a stand and hear how you can make a difference.

LEARN how you can stand with our constitutions.