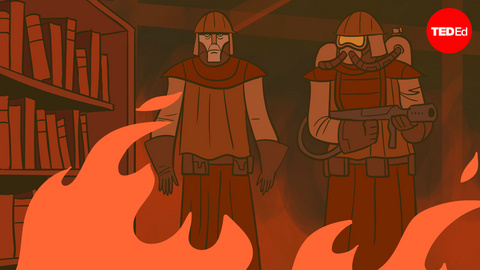 A couple of months ago we remarked on how big tech internet censorship of conservative voices was the liberal equivalent of book burning. Now mobs in Portland have taken a big step closer to actual book burning, demanding that Portland’s premier bookstore – Powells – stop selling a book critical of leftist hate/terrorist group Antifa. Read about it in the Foundation for Economic Education’s article The Mobbing of a Portland Bookstore Reminds Us Why Fahrenheit 451 Was Written.

or three days and counting, protesters in Portland, Oregon have gathered at a local bookstore to demand that it stop selling a new book critical of Antifa.

There are few acts of censorship as overt as a mob deciding which books people should be allowed to read. Ladies and gentlemen, antifa. https://t.co/pNdQKIw7SY

Ngo, the editor-at-large of The Post Millennial, a Canadian conservative news site, has documented the activities of Antifa, a leftist group that advocates violence in the name of fighting fascism. The journalist was beaten by Antifa activists at a rally in 2019, leaving him with a serious brain injury.

Left-wing activists say that because Ngo documents and criticizes the activities of Antifa, which claims to simply be “anti-fascist,” he is therefore a fascist. Saying his work is too dangerous to be allowed to be aired, Antifa members have called for Ngo to be banned from social media. Now they are trying to get his book banned from bookstores.

“We have to show up every day until they stop selling that f—king book,” one activist said. She claimed it was like “stopping the historical publication of Hitler’s ‘Mein Kampf.'”

A crowd of #antifa have gathered outside @Powells bookstore in downtown Portland to demand they pull my book from their website. The store has already announced it won’t stock the book on shelves. pic.twitter.com/bsX5HMGDSW

An #antifa protester outside @Powells Books explains that stopping the release of my upcoming book would be like stopping the historical publication of Hitler’s “Mein Kampf.” pic.twitter.com/8NVTtQwYNz

“Andy Ngo, this is my personal mission to f—king destroy your career.”

Portland antifa militant, Dustin Ferreira (@2lesslegs), has released a series of videos laying out threats to get my book on #antifa banned. He’s been angry I publicized his riot arrest info last year. pic.twitter.com/A6AQBAprRH

So far, the bookstore has not fully submitted to the protesters’ demands.

“This book will not be on our store shelves, and we will not promote it,” the store announced. “That said, it will remain in our online catalogue. We carry books that we find anywhere from simply distasteful or badly written, to execrable, as well as those that we treasure. We believe it is the work of bookselling to do so.”

“There are books in our stores and online inventory that contain ideas that run counter to our company’s and our employees’ values of safety, equality, and justice,” the explanation continued. “While we understand that our decision to carry such books upsets some customers and staff members, we do not want to create an echo chamber of preapproved voices and ideas. It is not our mission or inclination to decide to whom our customers should listen.”

The protests against the book have only generated more media buzz and attention to it, inadvertently—and rather ironically—helping it sell more copies.

Of course, the impulse to censor is understandable. We all think we know what is truly right, and we all believe that we’re the good guys. But the mob’s decision to engage in the modern-day equivalent of book-burning is nonetheless worth questioning.

In the novel Fahrenheit 451, author Ray Bradbury depicted a world in which firemen do not put out fires; they ignite them. In Bradury’s dystopian world, books have been outlawed, and it is the fire department’s job to go around burning them, with the eventual goal of eliminating books entirely from society. That way, the authorities reason, they can control peoples’ access to information. And by controlling what information people may access, they can control public opinion.

“You can’t build a house without nails and wood,” one character explains. “If you don’t want a house built, hide the nails and wood.”

“If you don’t want a man unhappy politically, don’t give him two sides to a question to worry him; give him one,” the same character later says in defense of the society’s book-burning efforts. “Better yet, give him none. Let him forget there is such a thing as war. If the government is inefficient, top-heavy, and tax-mad, better it be all those than that people worry over it.”

“Now do you see why books are hated and feared?” another one of Bradbury’s characters asks. “They show the pores in the face of life. The comfortable people want only wax moon faces, poreless, hairless, expressionless.”

How does Bradbury’s message relate to Antifa’s book-banning campaign? Members of Antifa don’t generally come across as particularly “comfortable.” Yet tyrannical impulses can be found in insurgencies as well as in “the establishment.”

Like Bradbury’s “firemen,” Antifa is trying to limit the sharing of ideas in order to avoid criticism and prevent social outcomes they dislike. Rather than grapple with the criticisms Ngo makes of Antifa on their merits, they resort to deplatforming. They don’t seek to engage but to erase.

Of course, maybe critics are right that Ngo’s arguments about Antifa are weak or his facts are wrong. I don’t have any reason to believe so, but then again, I have yet to read the book.

However, we won’t ever get to the bottom of this debate by silencing one side of it. Indeed, the very fact that one side seeks to ban its opponents’ arguments suggests that, like the oppressors in Bradbury’s fictional society, they fear that their stance wouldn’t hold up to full public scrutiny.

Of course, history’s most infamous book burners were the Nazis, who also sought to “win the debate” through censorship. Antifa’s “anti-fascist” credentials are not helped by adopting typically fascist tactics.

Silencing speech cripples the contest of ideas that leads a free society toward truth over time. So censorship is worth fighting against, no matter how large the mob outside the bookstore grows.

In Mainstream Media Thinks Parler Is a “Threat to Democracy” Because Libertarians and Conservatives Get to Post, Daisy Luther of The Organic Prepper talks about liberal outrage over social media alternative Parler – the free speech social network. Mainstream social media tech giants have been removing conservative and libertarian voices from places like Facebook, Twitter, Youtube, and many others in order to stifle dissenting voices in the name of false truth. These liberals want to remove alternative ideas from circulation. This is no different than burning books – books being the way most ideas circulated before the advent of internet technology. Liberals cried out, rightly, against book burning for many decades, and now liberals the book burners. As Time magazine once said, “if you are on the side of book-burners, you’ve already lost the argument.”

After years of being censored on Facebook and Twitter, conservatives, libertarians, and other fans of free speech are making a mass exodus to new platforms. One that has really taken off since the election is Parler, which has been the most downloaded app in the country over the past two weeks.

Unsurprisingly, the mainstream media and left-wing extremists are outraged. How dare the people who have been censored, deplatformed, and shut down on their social media sites move to a site that promises not to treat them like pariahs? (By the way, you can find me on Parler here: @daisyluther ) They go as far as to say it’s a “threat to democracy” because libertarians and conservatives get to post.

I mean, seriously, we can’t be letting conservatives and libertarians post their opinions all willy-nilly, right? What will happen without the “fact-checkers?”

Why on earth WOULDN’T people go to a different network?

Personally, I haven’t had access to my own Facebook pages for more than a year and won’t unless I send them photos of my passport, a utility bill, and other identifying information – because they didn’t think my driver’s license was sufficient. As well, I voluntarily archived my thriving preparedness groups because of the threat of losing both my groups, my own personal account, and the accounts of all my moderators if we let through a post of which Facebook disapproved. I wrote more about it here.

And remember when Twitter shut down Zero Hedge’s account for posting something about the coronavirus they deemed as misinformation that was later proven to be true? And how they put warnings on nearly anything the President posts? And how conservative and libertarian websites are being demonetized?

I invite you to try posting anything on standard social media that questions vaccines, the outcome of the election, the COVID lockdowns, or is pro-gun. I’ll see you in Facebook jail.

Everyone who is leaving is a crazy racist.

To hear the MSM talk about it, everyone over there has a “bunker mentality”, they’re joyously engaging in racism and hate speech, and they just want an echo chamber. It’s “not good for the country,” according to commentators on CNN.

“There’s this new social media app called Parler getting a lot of attention, because conservatives are leaving, saying they’re leaving Twitter and Facebook, going of to Parler, because they believe Parler is a safer space for them. What we’re seeing is even more of a bunker mentality in right-wing media. And ultimately that’s not good for the country.”

“No it’s not good, it’s a threat to democracy,” Pamela Brown replied, “that these people are in echo chambers and they’re getting fed a diet of lies essentially.” (source)

Incidentally, sweeping generalizations aside, there are a lot of folks over there (like me) who are not politically conservative.

CNN is not alone in their hysteria about the social media outlet. Here’s what the mainstream media is saying about Parler and the folks using it. Yes, the irony over their outrage is palpable. And yes, it does seem like they’re trying to further divide the country. Be sure to like the video and subscribe to the channel – it’s a great show with timely subject matter. (Warning: Some harsh language)

For those of you new to Parler:

If you ask questions on those videos, I’m sure you’ll get an answer.

Things to remember about social media

For those who want free speech that is not left-leaning, Parler definitely seems like a better option than the Big Tech monoliths. However, there are a few things to remember.

With these caveats in mind, I’ll see you over there if you are a social media person. Find me @daisyluther on Parler and please consider checking out our forum, here, for more in-depth preparedness discussions.

Do you think a more conservative social media outlet is a bad thing?

Are you bothered by a social media platform that doesn’t conservatives and libertarians? Or do you think it’s fair and reasonable to be able to share your opinions equally?