As long as we’re talking about gardening, let’s talk about composting. Composting is a good way to turn your yard waste, kitchen waste, and even paper waste into delicious, delicious garden food. Here is Preparedness Mama talking DIY Composting at Home

One of the easiest projects that you can do when it comes to gardening is to build a compost pile. It is also one of the most important parts of your garden. A compost pile offers some great benefits for both the soil and your fall cleanup efforts. In today’s article, we are going to go over the ins and outs of how to make a compost pile at home. But first, we will highlight some of the neat benefits of having your own compost pile. 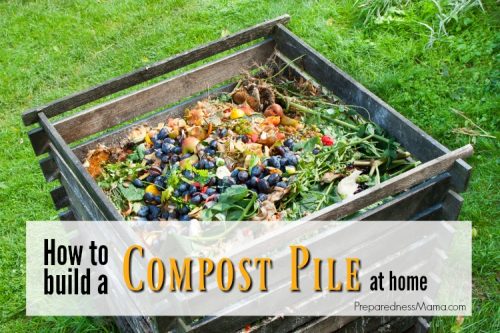 What Is a Compost Pile?

For individuals who don’t know, a compost pile is simply a pile of leftover organic scraps. These scraps can come from the outdoors, your kitchen, and even leftover animal waste. You might be wondering why anyone would ever want to collect compost, well, compost can provide the nutrients that your soil and plants need. A compost pile also feeds microbes that are beneficial and ensures that it will keep all the resources that are valuable out of the landfills.

As the organic material begins to breaks down, the nutrients and minerals feed the soil and give an overall boost of health to your garden. For gardeners who are looking to add that additional boost in a timely manner, composting is the solution that they seek.

Why You Should Build a Compost Pile

From financial reasons to environmental ones, there are so many reasons why you should learn how to make a compost pile. Let’s take a look at some of the top ones.

One of the best benefits of a compost pile is the significant reduction of waste it provides. When you are cooking or cleaning around the house, you will find that a lot of the items you come across can be composted. By composting, you get the benefit of being environmentally conscious all while putting resources back into the Earth. It is almost like having a mini recycling plant in your own backyard.

You Can Create a Rich Fertilizer

If you are a natural gardener, then you will love the fact that composting can provide you with having a nutritionally rich fertilizer. Having a fertilizer that is rich in minerals and nutrients can help you in having a successful harvest. Whether it be vegetables or flowers, a rich fertilizer can be the difference between a dull garden and a bountiful one.

Composting Can Help You Save Money

Once you learn how to make a compost pile, you will soon feel the financial benefit of it. For starters, if you pay per bag for garbage collection, you will notice that you will be throwing out less. This means more money in your pocket. Not only that but when it comes time to garden, a compost pile can be super helpful in saving you money. You no longer have to spend piles of money on buying fertilizer..

Composting is Good for the Environment

From reducing toxins to helping keep organic matter out of landfills, composting is proven to helping keep the environment clean. When you compost, you help return soil that has been infused with pesticides and other toxins back to a healthy state. Not only that, but composting helps to keep such toxins out of essential resources such as water supplies and other plants too.

Now that you have a general sense of how beneficial composting can be to a community. Let’s dive into the specifics of how to make a compost pile right at home… (continues)

Click here to read the entire article at Preparedness Mama.

John Mosby of the Mountain Guerrilla blog has some thoughts up on getting your garden started – Guerrilla Gardener: Some Thoughts and Observations on Vegetable Food Production (Or, Gardening for Knuckle-Draggers).

One of the truisms of gardening is that “Your first year of gardening will result in abject failure.” There’s so much to learn, about the plants, about starting seeds, about your local soil conditions and what amendments are needed, about weather and climactic conditions, etc.

We had gardens when I was a kid. We successfully raised rocks, tomatoes, rocks, okra, rocks, and peas, as I recall. Of course, as any gardener will tell you, those are some of the simplest crops to raise in a kitchen garden. In fact, they’re so easy to grow, you could almost grow them without even planting them (especially the case with rocks…).

My wife had never, as far as I know, had a garden in her life.

So, when we decided to start raising most of our own food, to increase our sustainability, my first instinct was to raise small livestock: chickens, rabbits, etc. Of course, I’m a meat-eater, both literally and figuratively, so that makes sense. My wife on the other hand, likes her veggies, and we want the kids to eat well-balanced meals, so a garden, it was decided, was a necessity (And, to be clear, by “it was decided,” I mean, HH6 said, “We’re going to plant a garden this year!” and I responded with, “Roger that, boss!”)

So, as is my norm, when confronted with a new, unfamiliar—foreign—mission, I started doing my “Area Study” research. I dug out a couple dozen books on subsistence gardening, organic gardening, no-till gardening, and etc.

Let me set your mind at ease: there’s a metric …ton of material available out there on gardening, and it’s fair to say that any given reference book on the subject will contradict what every other available reference book will say.

In the end, between our research, and my wife and I bickering about differing visions for the farm’s production, here’s what we ended up trying…

Click here to read the entire article at the Mountain Guerrilla blog.