You are invited to join me and a panel of experts in Yakima at the 2020 Senior Symposium on Thursday, February 20th!

There are many resources available for seniors, but navigating the systems can be difficult. I welcome you to attend the 2020 Senior Symposium if you or a loved one have questions about health and retirement benefits, identity theft and tax filing, or veterans issues. This event is free and open to all seniors and their families in the 4th Congressional District.

Staff and volunteers will also be on-site to interview for the Library of Congress’ Veterans History Project. If you are a veteran interested in archiving your stories of military service for future generations, please contact my Yakima office at (509) 452-3243 to arrange an interview at the Senior Symposium.

I hope you will join our panelists and me on February 20th for this fun and informational event! Constituents are encouraged to pre-register for the event here. Pre-registration is not required for attendance, but it will speed up the check-in process on the morning of the event.

The Yakima Herald published an article yesterday, Some say attorney general broke law in endorsing I-1639. The Yakima Herald and others get it wrong in saying that the criminal complaints against Attorney General Ferguson are attempts to fight against the unconstitutional I-1639 measure. (They also severely understate the limitations and deprivations of your rights resulting from I-1639.) The article implies that the complaints are over the constitutionality of I-1639, and they quote Attorney General Ferguson saying that he is confident of the constitutionality of I-1639 and thus is not concerned about these criminal complaints.

While most all of the complainants are certainly against the rights-stripping and limiting provisions of I-1639, these lawsuits are about a public servant in the executive branch of Washington state’s government, abusing his office to push legislation. That activity is not permissible under Washington state law. AG Ferguson improperly campaigned for and used government resources to push I-1639 and he continues to push more legislation, further abusing his power of office. If the attorney general is not stopped from these illegal activities, he will continue violating law. Now he declares the constitutionality of I-1639, appropriating the role of the judicial branch. AG Ferguson is subsuming the powers of all three branches of the government.

Bob Ferguson said in an interview, “The law is a powerful thing, everyone is accountable to it. It’s the great equalizer.” Ferguson claims that the attorney general’s office has a “culture of independence” from politics, but he does not practice what he preaches. Bob Ferguson must be held accountable. It doesn’t matter that he is the attorney general; it just makes his crimes worse.

In Yakima County, there is a hearing at the Yakima County District Court at 11:00 am on Friday, March 15th, 2019 for an initial hearing on the complaints that have been filed in Yakima County.

Washington Strikes Back is a grassroots effort to hold the attorney general accountable for his crimes against the people of the state. You can find more information about it through the link.

The Yakima Herald had an article on CERT volunteers and training last year – In an emergency, trained volunteers may be the first to reach victims. Yakima County has an active CERT program. Benton County does not. If you live in Yakima County, you can take advantage of the training from CERT. They do a “CERT Basic Course” for volunteers which includes:

Disaster Preparedness: Addresses hazards specific to the community. Materials cover actions that participants and their families take before, during and after a disaster as well as an overview of CERT and local laws governing volunteers.

Fire Suppression: Covers fire chemistry, hazardous materials, fire hazards and fire suppression strategies. However, the thrust of this session is the safe use of fire extinguishers, controlling utilities and extinguishing a small fire.

Psychology and Team Organization: Covers signs and symptoms that might be experienced by the disaster victim and workers, and addresses CERT organization and management.

Course Review and Disaster Simulation: Participants review and practice the skills that they have learned during the previous six sessions in a disaster activity.

Excerpt from the Yakima Herald article: 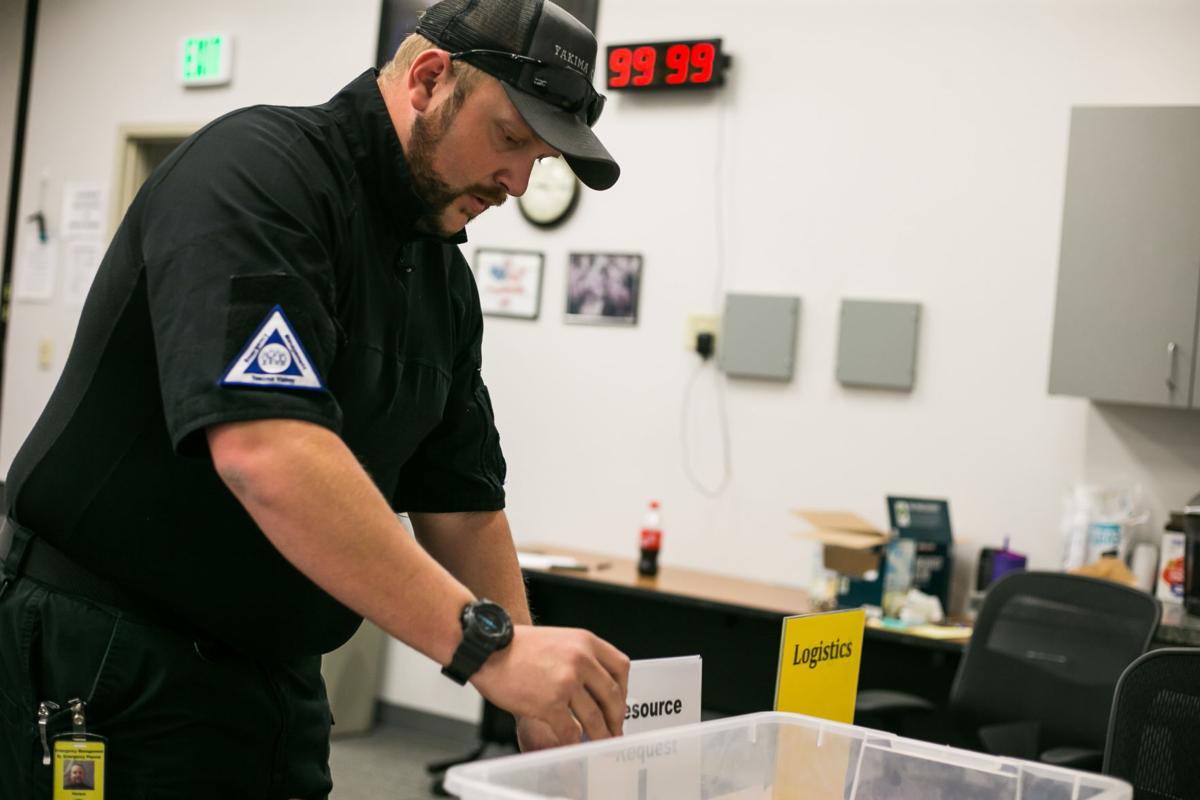 If an earthquake, volcanic eruption, wildfire or flood hits the Yakima Valley, you might not see firefighters or paramedics in your neighborhood for a while.

The experience in other disasters has shown that professional first responders can be overwhelmed as they deal with urgent needs, or they might not be able to get to where people need help because roads and bridges are out.

Instead, help for your neighborhood may come from people in green vests and hard hats like Paul Jenkins, a volunteer coordinator with the county’s Community Emergency Response Team…

The team has quarterly training exercises and participates in events such as a recent drill at the Yakima Air Terminal, as well as activations of the county’s emergency operations center in Union Gap.

While some people may think that firefighters, police and paramedics will be on the scene right away when a disaster strikes, Jenkins said they could easily be swamped with calls for help in an emergency, or the nature of the disaster might cut off access for a time.

Jenkins has been called out for flooding in West Valley, wildfire near Moxee and the Miriam Fire, where he helped distribute literature and provide security at the site. He was also sent to Outlook to help get information and bottled water to residents after an overflowing manure pond contaminated local wells.

While there are 60 people currently trained, Ward and Jenkins would like to see more people get involved, as it will give them skills to cope in a disaster…

At the current, unofficial count, Rep. David Taylor appears to have lost in the August 2018 primary. According to an article at We the Governed, Republicans showed poorly statewide, and many traditionally strong Republican districts had weak results.

The initial results in a variety of districts around the state – largely considered Republican leaning, but showing Republican weakness last night should be motivating some serious soul searching and galvanizing Republican efforts around the state.  Here is a review of a few of these races (please note direct links to election results will change as more late mail-in votes are counted):

In the 15th Legislative District (Yakima County), this district will remain in Republican control, but an intramural fight within the Republican Party has resulted in poor results for the Republican caucus and for everyone who values freedom. In a five way primary runoff for the house seat, longtime Republican incumbent David Taylor appears to have missed surviving the primary results with a disappointing election night return of 20.42%.  This result is partly due to a longtime well-known grudge against Representative Taylor by nearby Republican Senator Curtis King (LD-14) who has repeatedly recruited candidates to

run against Taylor.  Baring an unusual shift in ballot returns over the next few days, it looks like King succeeded with former Democrat and recently converted Republican Jeremie Dufault who will beat Democrat candidate AJ Cooper in the fall.  Representative Taylor was one of the most knowledgeable legislators of either party in Olympia when it came to land use, property rights, planning, and how the hodgepodge of land use laws functioned in Washington State.  Losing him from the legislature eliminates a desperately needed knowledgeable, freedom-oriented voice in the legislature.  Senator King didn’t like Taylor’s criticism of King’s various gas tax proposals and King’s endless campaign to increase the tax burden on Washington State citizens.  This is yet again another example of how Republican intramural fighting will help the Democratic Party agenda of higher taxes next year.

From the Yakima Herald

Yakima Health District officials are exploring the possibility of using State Fair Park as a medical care facility during a disaster.

The district is seeking proposals for a feasibility study of installing generators at the Yakima Valley SunDome, Pioneer Hall and the Deccio and Modern Living buildings, which would allow the facilities to be used as places to care for nonemergency patients if needed.

Fresco said that if feasible, the fairgrounds would be used as a place to take care of the nonurgent health needs of people displaced in a major disaster, such as flooding or an earthquake. The Health District is working with the Yakima County Commission, the county’s emergency management officials, the city of Yakima and the state Department of Health’s Disaster Preparedness Division on the proposal, he said.

The fair park is ideally located to serve as a place for nonemergency medical care in Central Washington in the event of a disaster, Fresco said.

Having generators is a prerequisite to being able to use the site as a backup medical facility, as planners would need to be able to provide heat and power in the event of a blackout, Fresco said.

The study is preliminary and will look at whether it is possible to outfit the buildings — some of which date back to before World War II — for emergency medical use, and how many generators would be needed to power the complex in an emergency.

It would not be the first time the fairgrounds was pressed into service in a time of emergency. During World War II, the fairgrounds housed a training school for military pilots and a factory for building Army trucks for use in the Pacific Theater.

Greg Stewart, State Fair Park’s president and general manager, said fairgrounds in other parts of the country have been used as emergency shelters for people and livestock during wildfires and other disasters and that he welcomes the study.

“The fairground has been the salvation of many communities,” Stewart said.

Our Annual Stand Down and Veterans Benefit fair is an awesome opportunity for all Veterans to attend.  We have over 70 organizations providing information and services to our Veterans and their family.

Our event has something for everyone.  It is an opportunity for our Veterans and community to come together to recognize and serve our Veterans.

Multiple free services for Veterans:  Click on Stand Down Flyer below.

The Yakima Herald reports on the importance of amateur radio volunteers in the county.

There are parts of Yakima County — think White Pass and Chinook Pass — where cellphone service is spotty or non-existent. Ham radios have no such problems. They can operate through a system of relays with other operators or even bounce signals off the ionosphere to communicate with stations thousands of miles away.

In a major disaster, the radios would likely be one of the few ways to communicate with the outside world, as they can run on batteries or gas-powered generators.

The state’s Military Department, which oversees disaster response on the state level, notes that many agencies — including the state’s Emergency Operations Center — successfully used ARES teams for communications during last year’s Cascadia Rising earthquake and tsunami drill. State emergency officials recommended that local agencies should establish a “habitual relationship” with ARES teams — if they don’t have one already — to ensure coordination in an emergency.

In Yakima County, the team works with the Yakima Valley Office of Emergency Management to prepare for emergencies, and has a radio room at the county’s Emergency Operations Center in Union Gap.

Yakima’s two hospitals have amateur radio stations that can be used for emergency communication with authorities in disasters, Whitney said. And today’s radios are capable of linking computers together so they can share data in emergency situations if internet connections are not available.

There is also a related article by Yakima Herald staff over at govtech.com Radio Volunteers a Key Component of Public Safety