This excerpt of The Virginia Gun Rights Conflict: Best And Worst Case Scenarios comes from Brandon Smith at Alt-Market. This might be a good time to mention that there is actually a difference between Leftists and Liberals, as Brandon Smith keeps using the word Leftist in his article. In general, a leftist is anti-capitalism; they may be pro socialism or communism. Liberals, on the other hand, are generally pro-capitalism, or at least some form of regulated capitalism that they have “fixed.” Leftists are less likely to believe in the concept of nations, preferring instead the brotherhood of all peoples, while liberals may still believe in the concepts of patriotism in their own terms. In the current Democrat Presidential candidates, Bernie Sanders is a leftist, while Elizabeth Warren is a liberal. Leftists and liberals, while existing within the same Democrat party don’t like each other very much and don’t like being conflated. I point this out merely because many leftists do consider themselves pro-gun because socialists in history (like Marx and Orwell) have said that the proletariat must have arms in order to smash the capitalists.

In my article ‘Trump Impeachment And The Civil War Scenario’, I warned that conservatives and leftists are being pushed to the brink of a shooting war using various methods of social manipulation and 4th Gen warfare, and that this conflict, if dictated by gatekeepers of the false Left/Right paradigm, would only benefit establishment elites in the long run. Internal division among the public is designed to keep us at each other’s throats while losing focus on the real enemies.

Hard line democrats and the social justice cult are merely a symptom of the disease, they are not the source of the disease. However, I also acknowledge that the rift between conservatives and the political left has become so extreme that reconciliation is almost impossible. War might be unavoidable, and the globalists love it. If they can pretend like they had nothing to do with creating tensions, and if conservatives are so blinded by anger against Democrats that they refuse to admit that some of their own political leaders (including Trump) have been co-opted, the elites win.

The danger in any civil war is that BOTH sides end up being manipulated and controlled, and that the situation is maneuvered towards an outcome that only serves the interests of a select few…

Leftists argue that sanctuary county resolutions are “purely symbolic” and have no force of law behind them.

This is a rather naive (perhaps deliberately naive) position, as it ignores the fundamentals. The force of law is either compelled by conscience, or it is compelled by violence. The law itself is meaningless without these two factors.  If groups of citizens choose not to follow a law because they find it morally reprehensible, there is nothing the state can do except try to frighten them into compliance with the threat of violence. The concept of a law by itself has no energy, and claiming that something is “right” because it is now “law” is not a valid argument.

In the case of anti-gun laws in Virginia, the VAST majority of counties in the state and the people in those counties have made it clear that they will not comply. The leftists have completely ignored this fact by simply saying “They have to comply because the law says so…” This is the type of attitude that leads to war…

Leftists are correct, the two situations are NOT the same.  Illegal immigration is not a constitutionally protected right, and gun ownership is.

I find it fascinating that not long ago leftists and statist Republicans were arguing fervently against the idea that states and municipalities could nullify federal law.  During the 10th Amendment and nullification uprisings that led to such confrontations as Bundy Ranch, these people viciously attacked anyone that supported sovereignty activism.  They used to claim that the federal government was the alpha and the omega; the final word.  Now, suddenly, leftists have pulled a u-turn and are attempting to assert sovereignty rights for illegals in sanctuary states and cities.  Again, illegals are not afforded constitutional protections, gun owners are.

One could try to make a moral argument in favor of protecting illegal immigrants from deportation, but there is no legal argument…

The worst case scenario is that this is an establishment beta test for the rest of the country, and that they may WANT to start a conflict in the hopes that this will spread into a national civil war. This kind of scheme would require accelerated and violent enforcement of gun laws by Democrats in Virginia to illicit an immediate response. If this is the case, and a wider conflict is triggered, conservatives MUST NOT lose sight of the bigger picture. The globalists should be the focus of our ire; the democrats are being used. A conflict based only on political division will mean defeat for us all, and a win for the elites.

Click here to read the entire article at Alt-Market.

Constitutional attorney John Whitehead of the Rutherford Institute has written this article on the dangers of red flag laws and the current trend of Second Amendment Sanctuaries amidst growing government tyranny – Red Flag Nation: Anti-Gun Laws, Sanctuary Cities and the Second Amendment. The article is rather lengthy, but John Whitehead writes informative pieces; it’s worth your time.

…Seventeen states now have red flag laws on their books.

That number is growing.

As The Washington Post reports, these laws “allow a family member, roommate, beau, law enforcement officer or any type of medical professional to file a petition [with a court] asking that a person’s home be temporarily cleared of firearms. It doesn’t require a mental-health diagnosis or an arrest.”

In the midst of what feels like an epidemic of mass shootings (the statistics suggest otherwise), these gun confiscation laws—extreme risk protection order (ERPO) laws—may appease the fears of those who believe that fewer guns in the hands of the general populace will make our society safer.

Of course, it doesn’t always work that way.

With these red flag gun laws, the stated intention is to disarm individuals who are potential threats… to “stop dangerous people before they act.”

While in theory it appears perfectly reasonable to want to disarm individuals who are clearly suicidal and/or pose an “immediate danger” to themselves or others, where the problem arises is when you put the power to determine who is a potential danger in the hands of government agencies, the courts and the police.

We’ve been down this road before.

Remember, this is the same government that uses the words “anti-government,” “extremist” and “terrorist” interchangeably.

This is the same government that keeps re-upping the National Defense Authorization Act (NDAA), which allows the military to detain American citizens with no access to friends, family or the courts if the government believes them to be a threat.

This is the same government that has a growing list—shared with fusion centers and law enforcement agencies—of ideologies, behaviors, affiliations and other characteristics that could flag someone as suspicious and result in their being labeled potential enemies of the state.

For instance, if you believe in and exercise your rights under the Constitution (namely, your right to speak freely, worship freely, associate with like-minded individuals who share your political views, criticize the government, own a weapon, demand a warrant before being questioned or searched, or any other activity viewed as potentially anti-government, racist, bigoted, anarchic or sovereign), you could be at the top of the government’s terrorism watch list…

Click here to read the entire article at The Rutherford Institute.

This piece talks about how 90% of the counties in Virginia have become Second Amendment sanctuaries in just 43 days after draconian anti-gun rights bills were introduced by the new Democrat majorities in the state’s legislature. The movement is also spreading to other states.

Since the Nov. 5 election that gave Democrats control of Richmond, an “organic,” pro-gun movement has prompted the governments of 86 of Virginia’s 95 counties, as well as 15 towns and cities, to adopt some type of sanctuary language, putting Gov. Ralph Northam and other liberals on notice that their gun control plans aren’t welcome.

“I did not think it would be that high of a number,” said sanctuary advocate and Culpeper County Sheriff Scott Jenkins.

Stafford County is now a sanctuary! That’s the last for tonight and number 101!

“It’s an organic thing that just took off after Election Day. Elections have consequences, and this is the result. This has truly rocked the conservative, libertarian group’s core. It has really shook a lot of them awake. They are fully awake,” he told Secrets.

Remarkably, the effort has not seen a big push from the National Rifle Association. Local groups, notably the Virginia Citizens Defense League, have led the campaign that has brought thousands of gun-rights advocates to county board meetings.

It has also become the national model for the movement that has now reached Illinois, Washington, Colorado, New Mexico, Texas, New Jersey, Florida, and Tennessee. Illinois is credited with starting the movement… 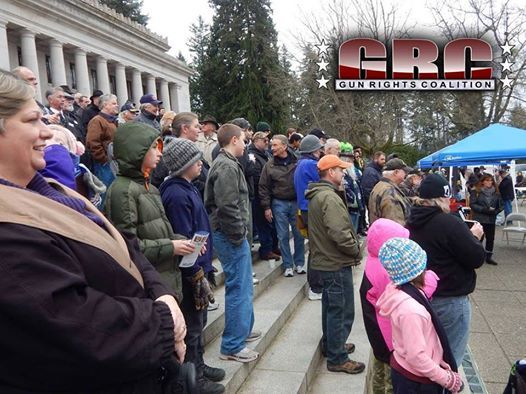 In case you missed the previous post, Washington state Democrats are introducing at least three, new anti-rights bills for the 2020 legislative session — assault firearm ban, a standard-capacity magazine ban, and ammunition purchasing restrictions. Gun Rights Coalition is planning a Rally 4 UR Rights event in Olympia at the Capitol on Friday, Jan. 17th, 2020 from 8:30 am to 12:00 pm.

Join us at the Capital legislative steps continuing to defend your
2nd Amendment Rights. It’s TIME to fight back!
Listen to Pro2A legislators on how we can turn the tide, stay engaged and put pressure on elected officials in Districts that took your rights away!

0800-0900 Set up
0910-1030 Legislative Speakers
1045-1200 Meet up with your Legislators of your District
*** Contact your legislators for appointments for this day***
We will have a team there to both help you find your reps and to help you write letters to them.

“You may have to fight a battle more than once to win it.” …Margaret Thatcher

Please note: We would like to ask anyone that carries firearms to please keep them holstered or slung. Each of us is responsible for our own actions. That includes both appropriate safety and conducting ourselves in a respectful manner that will reflect positively on the group as a whole. Thanks and can’t wait to see you all there.

Virginia recently passed similar restrictions and citizens and the counties have overwhelmingly responded against the laws, passing Second Amendment Sanctuary resolutions in 89 counties, cities or municipalities. Will Washingtonians prove weaker?