Patrice Lewis of Rural Revolution writes about finding happiness in virtue and rejecting unhealthy passions in Were Stoics on to Something?

After a lifetime of hearing virtually nothing about the philosophy of stoicism, suddenly I’m seeing articles about it everywhere.

Stoicism, as you may know, is a school of philosophy founded in ancient Greece in the 3rd century B.C. by Zeno of Citium. Famous adherents include Seneca, Epictetus, and Marcus Aurelius. 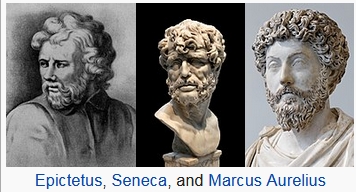 According to the Daily Stoic, “The philosophy asserts that virtue (such as wisdom) is happiness, and judgment should be based on behavior rather than words. That we don’t control and cannot rely on external events, only ourselves and our responses. … Stoicism doesn’t concern itself with complicated theories about the world, but with helping us overcome destructive emotions and act on what can be acted upon. It’s built for action, not endless debate.” (This website also offers nine exercises for developing stoicism.)

The philosophy is a lot more complicated than that, but you get the gist.

So why, after a lifetime of barely hearing a peep about this philosophy, am I seeing stoicism get so much coverage? I’m sure the timing — coming as the globe shuts down over the coronavirus pandemic — is no coincidence. Now that life has suddenly become very complicated, I suppose stoicism may offer ways to handle those complications.

The concept of “It’s not how you feel, it’s how you behave” is a new and possibly difficult philosophy for many people to abide by. Our modern society teaches us emotions and feeeeelings are paramount. Every little perceived microaggression must be treated as earth shattering and personal. We are literally enshrining emotions (hurt feeeeeelings) into law.

But with so much now out of our control, maybe the stoics are onto something.

This article, for example, recommends stoicism for anger management: “Seneca thought that anger is a temporary madness, and that even when justified, we should never act on the basis of it because, though ‘other vices affect our judgment, anger affects our sanity: others come in mild attacks and grow unnoticed, but men’s minds plunge abruptly into anger. … Its intensity is in no way regulated by its origin: for it rises to the greatest heights from the most trivial beginnings.'”

The author recommends behaving like a rock when insulted. “Stand by a rock and insult it, and what have you accomplished? If someone responds to insult like a rock, what has the abuser gained with his invective?” This way, the insulter can be “livid with rage” while the insultee can retain his serenity. (This author also offers tips on how to keep from getting angry.)

In another article, the writer points out two foundational principles of stoicism: “The first is that some things are within our control and some are not, and that much of our unhappiness is caused by thinking that we can control things that, in fact, we can’t. What can we control? Epictetus argues that we actually control very little. We don’t control what happens to us, we can’t control what the people around us say or do, and we can’t even fully control our own bodies, which get damaged and sick and ultimately die without regard for our preferences. The only thing that we really control is how we think about things, the judgements we make about things.”

The second principle is: “It’s not things that upset us, but how we think about things. Stuff happens. We then make judgements about what happens. If we judge that something really bad has happened, then we might get upset, sad, or angry, depending on what it is. If we judge that something bad is likely to happen then we might get scared or fearful. All these emotions are the product of the judgements we make. Things in themselves are value neutral, for what might seem terrible to us might be a matter of indifference to someone else, or even welcomed by others. It’s the judgements we make that introduce value into the picture, and it’s those value judgements that generate our emotional responses. … Another Stoic strategy is to remind ourselves of our relative unimportance. The world does not revolve around us.” …(continues)