John Mosby of the Mountain Guerrilla blog has some thoughts on permaculture. He’s mentioned a few times in other articles, but here are two blog posts of his where he spends a bit more time expounding upon its goodness.

I get a lot of questions about why I’m so gung-ho about Permaculture, since to the newcomer, it appears to be a “society” dominated by social justice warrior liberals. While that’s not entirely inaccurate as an observation, it’s really a simplistic approach, and ignores the inherent value of the Permaculture concept to not only survival, but tribal culture.

My general, semi-humorous answer is, I’m gung-ho about Permaculture because I’m…lazy. The ideal behind permaculture, for those unfamiliar with it, is that it is “permanent agriculture.” To whit, it involves planning and planting, in such a way that requires minimal human interference, to maintain continued useful production for decades. This is contrary to standard agriculture that requires annual replanting, fertilization, and all the related tasks and inputs that go along. I like the idea of not having to work too much to produce food, because I’m…lazy.

Really though, if we’re being serious, from a preparedness perspective, this makes sense for resilience. In a post-grid environment, I suspect I’m going to be awful busy. If I can reduce my task load then, by planting a resilient, low-maintenance food production system—a food forest—now, that seems like a no-brainer to me. It’s more labor-intensive in the front end, especially if you do it like I do, without using power equipment any more than necessary, but the back end pay out is brilliant.

In an speech he did before he died, called “Liberation Permaculture” (If you do a Google Search, you can find audio files of the speech. It’s well worth listening to.), the late Toby Hemenway, author of my favorite Permaculture book to date, Gaia’s Garden, made the point that Permaculture is really the ultimate guerrilla/insurgent/survivalist form of food production, and it is incredibly anti-totalitarian…

And the second is Permaculture for Preparedness

Permaculture is famous for its ethics and principles. These are the basic guidelines along which permaculture was codified by Mollison and Holmgren. Sadly, many readers have limited themselves to second, third, and even fourth generation permaculture teachers and writers, and much has been lost in the translation, so to speak. People have learned a shallow understanding of the tactics and techniques of permaculture, without really understanding the strategy or operational capabilities.

An example of this in preparedness can be seen in a comment I received a few months ago, in which a reader lauded the discussion of alternative energy, food production, and other aspects of daily living in a post-industrial environment, but wanted me to focus on the “partisan” aspects, by which I assume they meant the cool-guy action figure gunfighter stuff. The problem with this is something that all too often, people who have never had to plan an operation, let alone write an OpOrder, overlook: you can only “operate” so long without support in the form of food, equipment, and shelter. There’s a reason, after all, that an SF ODA has engineers and medics, as well as weapons sergeants. As a mentor in SF once asked me, “What do you call an A-Team made up entirely of Bravos?” The answer? “An understrength Ranger Platoon.”

If we approach the discussion of Permaculture from the UW perspective, the focus on Permaculture begins to make considerable sense from both an operational and a strategic perspective. If we define our UW strategy as “We don’t have to win. We don’t even have to not lose. All we have to do is make sure our supporters and the unaligned populace both know that we’ll still be here when the enemy is gone,” and we define our strategic goal as “cultural and genetic survival” rather than “individual survival,” then the permaculture approach begins to make even more sense… 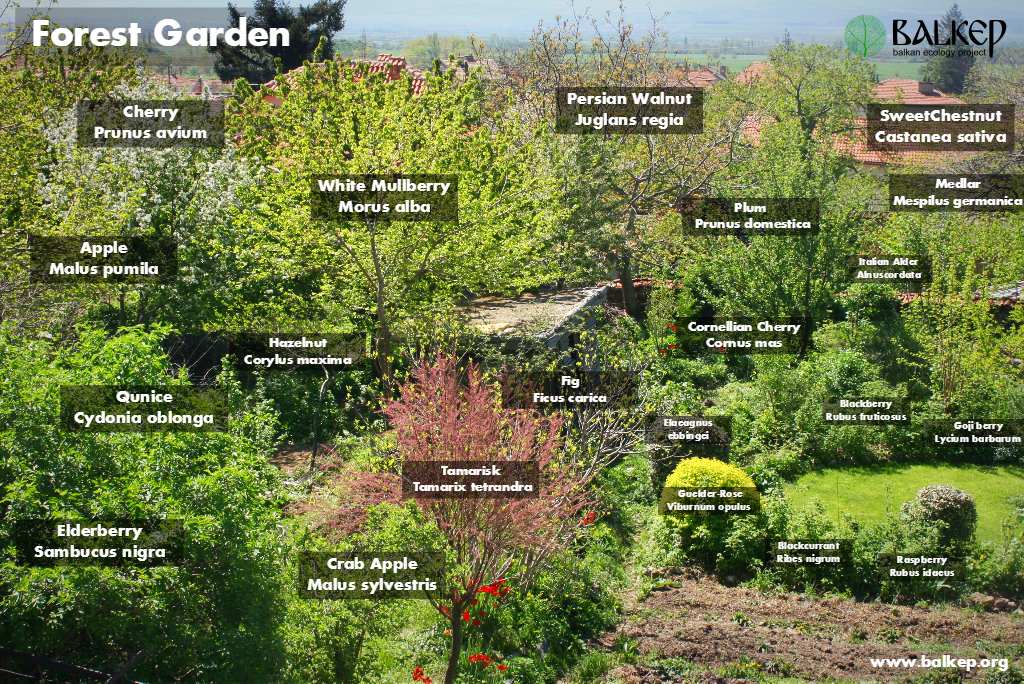 …Another factor that makes Permaculture valuable is that it recognizes that human’s do not have unlimited ability to manage. That limit is often the factor that bottlenecks productivity. Permaculture’s solution is to break the property into “zones” based on how often then need to be attended to and order them in rational ways.

For example, the path between your door and the mail box is walked at least once every day. It is the ideal place to plant everbearing raspberries and strawberries or edible flowers. Bringing in the mail would also mean bringing in a small basket of fruit for dessert or for your morning cereal.

Conversely, “the woods” might only get visited a few times a year for gathering nuts, hunting or cutting wood for fuel and construction…

The American Civil Defense Association has an article up on Survival Landscaping — how to use permaculture to provide food in the event of a long term disaster.

…According to Marjory Wildcraft of www.thegrownetwork.com, it is just too land intensive to realistically support a family on the hunter-gatherer system. She states: “Let’s start first off with the almost magical dream of the pure hunter/gatherer. I often hear this one from those concerned about a collapse of civilization. Just how much land does it take to support you without destroying all the wildlife and plant populations? How much area do you need in order to live sustainably as a hunter/gatherer? Since there are so few actual hunter/gathers left alive on the planet, and the few places where they do still exist tend to be jungles which look nothing like anything in North America, we will turn to anthropological data. The quick and easy answer is that traditional peoples used on average, about 10 square miles per person. Ten square miles is 6,400 acres – that is for one person.”

So what’s the answer? It just might include creating your very own self-sustaining food supply. Call it survival landscaping, permaculture, sustainable agriculture or whatever you like. The goal is to work with nature to create a truly sustainable system. A garden paradise that requires little or no human intervention once established. Due to the “natural looking” nature of this type of landscape most individuals would never suspect the amount of life-saving food growing in the tangle. Thus protecting your food supplies in plain sight.

The objective is to create an environment which requires very little human intervention once it is established.

The ideal permaculture design produces food year after year without weeding, pruning, tilling, fertilizing or using pesticides and herbicides. The system is perfectly balanced for the local climate. It is possible to accomplish permaculture landscape on a half-acre city lot as well as in a more spacious country environment. Permaculture takes many years to establish and become resilient to changing conditions.

Selection of plants is critical to take best advantage of local climate conditions, ensure natural balance and to extend the harvest throughout the entire growing season. There are a growing number of great reference books to guide you through the process. Many of the authors recommend a more “natural or wild looking” landscape which is perfect for a remote bug out location, but may not be welcomed in a gated community…

Click here to read the entire article at TACDA.org.