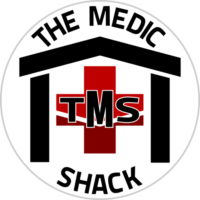 Chuck at The Medic Shack has an article introducing people to the concept of Triage.

Triage. An introduction to combat medicine.

Welcome to the next level of preparedness. Trauma. Trauma can come from many sources. A slip with an knife in the kitchen. A smashed thumb in the workshop. A terrible cut from a chainsaw. Being at the wrong place at the wrong time and caught up in a riot. Now add in those same injuries, but multiply times 10. You now have a MCE. Pick the scenario. It can happen. Learning how to prioritize, delegate, investigate, assess and treat are skills anyone can learn.

Applying them with out emotion is a different beast altogether. It is doable. One of the hardest things to master in triage is seeing the injuries, and not getting personal with them. Another is being able to itemize the injuries, almost coldly and place them in the order of severity, and the order of treatment.

This is a HUGE deviation from the basic first aid that we talk about. With the fast moving changes sweeping the country and the world, Cat from The Herbal Prepper and I decided that we need to change up some of our topics and delve into more advanced lifesaving.

A word of warning and disclaimer. We are not doctors. We can not diagnose, prescribe or treat injury nor illness outside of a SHTF situations. This blog post is for informational use only. Pagan Preparedness, nor the owners, operators, instructors or author’s claim any responsibility for people using this information in any manner.

Triage= The process of sorting people based on their need for immediate medical treatment as compared to their chance of benefiting from such care.

This is the method I used as a combat medic. There are terms here that people may be uncomfortable with. Items like balancing resources that you have now, to what you may have to what benefit it will give the patient, AND what loss/benefit of the expending those supplies will have on the group

Step 1: Remove GREEN patients. Get help, you can’t do it all yourself

Always remember. There are many more patients than rescuers.

Triage is designed to separate patients into categories according to their injuries, level of consciousness , and yes even if they are alive. It is important to do the examination quickly but be very complete with it. Lives depend on it. This is one the things that gives us medics bad dreams. At the triage station you may have to make a decision on if someone lives or dies.

The triage that we’ll go over here, is slightly different than what one will see in the local emergency room. The basics are the same, but the application of a hostile or dangerous environment adds a new level of difficulty,